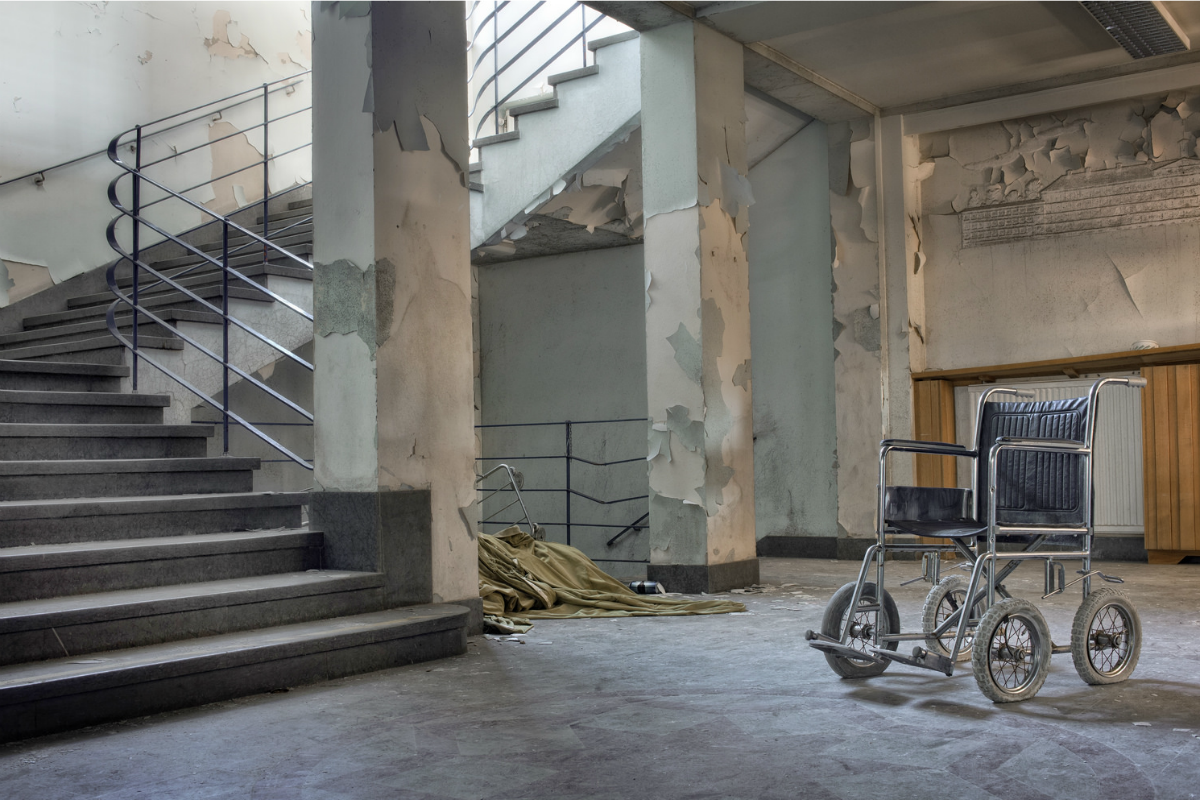 A wheelchair in the main entrance area of an abandoned tuberculosis sanatorium in Sweden. [AndreasS/Flickr]

Greater political commitment to fight tuberculosis is urgently needed, as Eastern Europe is struggling with some of the highest rates of drug-resistant tuberculosis (MDR-TB) worldwide, writes Evan Lee.

Evan Lee, M.D., is Vice President of Global Health Programs at Eli Lilly and Co. He also serves as the private sector constituency representative on the Stop TB Partnership Coordinating Board.

On 30-31 March, Latvia will take advantage of its Presidency of the Council of the European Union to convene European leaders in Riga for the 1st Eastern Partnership Ministerial Conference on Tuberculosis and Multidrug-Resistant Tuberculosis.

Greater political commitment to fight tuberculosis is urgently needed, as Eastern Europe is struggling with some of the highest rates of drug-resistant tuberculosis (MDR-TB) worldwide. European officials should seize this opportunity to act swiftly and decisively as TB and MDR-TB continue to pose a menace that can spread across borders.

TB is a bacterial disease that spreads through the air, with origins dating back 40,000 years. Thanks to modern medicines and scientific know-how, TB is today preventable, treatable and curable. The global health community marked a turning point against this disease in 2011 when the number of new cases worldwide began falling for the first time in decades.

Unfortunately, this clever bacterium has found ways to not only survive, but thrive in some regions. A full six-month course of TB treatment is required to cure the disease. Starting but not completing treatment can build resistance to first-line antibiotics and lead to the development of MDR-TB — which is far more difficult and expensive to treat.

Eastern Europe is among the top hotspots for MDR-TB, with an alarming 65,000 cases in in 2013 according to the latest report from the World Health Organization. As many as 1,000 Europeans are newly infected with TB each day.

One of the highest ever MDR-TB rates was recorded in Belarus, where a 2010 survey conducted in Minsk found that nearly one in every two persons living with TB was infected with MDR-TB. Another recent study conducted in Eastern Europe clinics by EuroCoord found that about a third of people living with HIV/AIDS and diagnosed with TB in fact had a drug-resistant strain of the disease.

On average, fewer than half of these patients are identified and cured, causing tremendous suffering and extensive loss of economic productivity in the region as well as continued spread of the disease.

As delegates gather in Riga for the Ministerial Conference, it’s important to recognize that there is no shortage of plans pointing the way forward. For example, in 2011, the World Health Organization led a multi-stakeholder effort to develop the Roadmap to Prevent and Combat Drug-Resistant Tuberculosis in the European Region 2011-2015, and a Consolidated Action Plan to guide countries through the process of policy change and implementation.

Yet despite the existence of these plans, and official commitments to implement them, we simply aren’t seeing the desired results — and in many countries, the problem is only getting worse.

This isn’t the case only in Europe, but around the world in places where TB hits hardest. A recent eight-country survey of diagnostic and treatment practices conducted by Médecins Sans Frontières found significant gaps between policy and practice for both TB and MDR-TB. And according to the Stop TB Partnership, three million persons living with TB worldwide were either not diagnosed, not treated, or not officially registered by national TB programs.

That is not to minimize the scale of the response required. Since 2003, through our MDR-TB Partnership, Lilly has been working to support healthcare professionals at the front lines of the fight against MDR-TB. We know firsthand how complex the challenge is, particularly in regions with under-resourced healthcare infrastructure. But we’ve found that with a clear focus on best practices, sustained funding and a political commitment – not only to policy, but to action – we can achieve real results.

Tomsk, for example, one of the oldest towns in Russian Siberia, has wrestled with TB for decades. Working together locally with Partners in Health, the city of Tomsk has implemented a properly designed MDR-TB program, backed by adequate resources and a well-trained multi-task team that focuses on patient needs. Thanks to these reforms and a renewed focus on TB control, Tomsk has reported dramatic reductions in both cases and deaths. TB case rates are down to roughly half of the regional average, and TB-related deaths are down to around one-fifth.

Upon conclusion of the Ministerial Conference, delegates will be invited to adopt the Riga Declaration on Tuberculosis. It is my hope that the declaration will focus on concrete and immediate steps that can be taken to help people living with TB and MDR-TB in Eastern Europe, and prevent this disease from further wreaking havoc. What we need now more than anything is swift and decisive action.