The Brief, powered by UNESDA – Dreams of summer 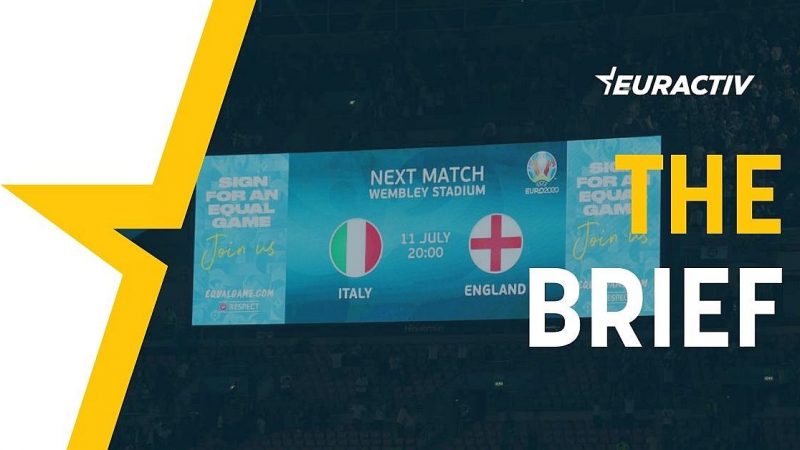 After four weeks of a European Championship that started with the horror and near tragedy of Danish star Christian Eriksen’s collapse on the pitch, football’s coming home. Or going to Rome.

National bias aside – the ‘coming home’ mantra probably cuts little ice for anyone who isn’t English – the Italian and English teams are easy for a neutral to like: in an era of megastars, both are reassuringly free of players with giant–sized egos.

That goes some way to explaining why they have been the best teams in a high quality tournament.

Unfortunately, the story of politicians trying to exploit sporting events and success is as old as time, and has been played out again.

Hungary’s Viktor Orban cancelled a trip to watch his team play Germany in Munich after the Munich authorities sought to light up the stadium in rainbow colours – in response to Hungarian lawmakers passing anti-LGBTQ legislation that conflates homosexuality with paedophilia.

Having previously shown no interest in football, Boris Johnson, needless to say, has suddenly taken to wearing an England shirt just as Gareth Southgate’s team began winning. However, riding a football team’s popularity is a dangerous business for a politician, especially one as polarising as Johnson.

“The standard of leaders in this country in the last couple of years has been poor. And looking at that man there, that’s everything a leader should be: respectful, humble, telling the truth, genuine. He’s fantastic, Gareth Southgate,” Neville told the 27 million television viewers.

Regardless of who wins on Sunday, there will be a rush to make political capital from the result.

But the most important side to the Euros has been that, after being locked inside for 16 months, it feels like some semblance of normality has returned. Stadiums with supporters, bars and pubs showing the matches, and street parties for the victors.

The pandemic is not over and COVID numbers are still rising across much of Europe, including in Britain, where Sunday’s final will take place. There is every chance that the socialising caused by the championships will prompt a spike in cases.

But part of the joy of sport lies in its capacity to suspend reality. Even those who are immune to the beautiful game’s charms can see that we need our dreams of summer.

The anti-elite party “There is such a people”, founded by Bulgaria’s popular TV showman Slavi Trifonov, is in pole position ahead of Sunday’s (11 July) snap parliamentary elections in the poorest EU country. EURACTIV Bulgaria reports.

The benefits of children attending school outweigh the risk of contracting and spreading COVID-19, although cases in children are set to soar in the autumn, said a new report from the European Centre for Disease Prevention and Control (ECDC), published on Thursday (8 July).

The European Parliament on Thursday (8 July) called for the EU to boycott the February 2022 Winter Olympics in Beijing unless China improves the human rights situation in Hong Kong and in the Xinjiang province which is home to the Uyghur Muslim minority.

The high-level meeting next week in Uzbekistan’s capital Tashkent to discuss connectivity is a stability dividend and a timely opportunity to convince countries that the international community is not abandoning the region following US withdrawal from Afghanistan, stakeholders told a recent EURACTIV event.

The European Commission will table a package of energy and climate laws on Wednesday (14 July) aimed at reaching the EU’s 2030 goal of cutting emissions by 55%, and putting it on track to hit net zero by 2050. EURACTIV gives you the lowdown on the plan.

The European Parliament on Tuesday (6 July) gave the final green light to the post-2020 European Maritime, Fisheries and Aquaculture Fund (EMFAF), the EU’s main tool to support fishing communities, which will allow young fishermen to acquire their first fishing vessel.

As always on Friday, don’t forget to check out our weekly Digital Brief. The Global Brief becomes your week-reading, landing in your inboxes on Sunday morning.