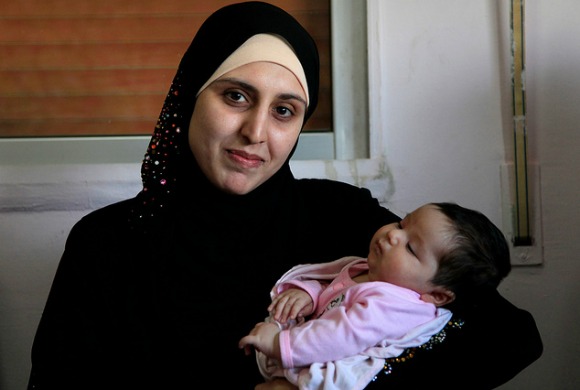 A Syrian refugee and her newborn baby at a clinic in Jordan. Zaatari refugee camp, August 2013. [DFID/Flickr]

With an increasing number of refugees left without access to all but the most urgent healthcare across Europe, sexual and reproductive healthcare must be made available to those who need it, writes Michele LeVoy on the occasion of World Health Day (7 April).

Michele LeVoy is the Director of the Platform for International Cooperation on Undocumented Migrants (PICUM).

Two weeks ago, a 24-year old woman gave birth to a baby girl in a tent in the middle of a squalid camp, where more than 11,500 people live, many of them families with small children as well as pregnant women. To the increasing shame of a growing segment of the population, as well as policy makers, this scene took place in the European Union.

Idomeni, Greece, is now the EU’s southern equivalent of Calais, France, where migrants languish in dehumanising conditions due to the inability to move further within the EU.

Aid organisations such as Doctors of the World have stepped in to fill the gaps in both places due to states’ inaction to provide migrants with health care, including maternal care. But, for migrants in an irregular situation, lack of access to healthcare is not only a reality in such camps; it is a phenomenon throughout the EU.

Laws regulating access to health care are established at the national level, not by the EU, which is why undocumented migrants’ ability to access sexual and reproductive health services is a patchwork across the bloc.

In the majority of member states, undocumented migrants are only entitled to access emergency health care.

In two member states, they are even required to pay for emergency care. For an irregular migrant, who is not entitled to social benefits and who typically works without formal contracts at substandard pay levels, making care available at a cost effectively means making it unavailable.

In twenty-one member states women without residence status are legally entitled to some degree of maternity care under national law, but this can vary from delivery only to care at nearly the same level as nationals are entitled to.

And even if the law grants some access, a great deal of confusion exists amongst medical staff and practitioners, which itself can create barriers.

In the UK, undocumented women cannot be refused maternity care, even if they may later be charged insurmountable debts that could cost them their ability to regularise their status.

A heavily pregnant undocumented woman in London was told by her healthcare provider that her baby was poorly positioned in her uterus and that she would need to have a caesarean section to avoid complications.

When she went to the hospital to arrange the procedure, she was turned away because the staff believed she was only entitled to emergency care. She was told that she could only have a caesarean section once she was in active labour, and only if it was urgent to avoid harm to her and her baby.

Many undocumented migrants fear that seeking medical assistance will lead to denunciation and arrest. This fear is not unfounded. A Filipina undocumented woman was recently deported from Denmark a few weeks after giving birth by emergency c-section to a baby girl who later died. Hospital staff reported her to immigration authorities while she was still recovering in hospital.

As a result, networks of medical professionals have sprung up in Germany in recent years. Many of these associations are run by volunteer health professionals seeking to uphold their professional ethics to provide health care to anyone in need. Throughout the country, they work closely with local and regional authorities to fill the gap caused by restrictive policies at the national level.

In the context of sexual and reproductive rights, exclusion from health services means that undocumented migrants face delayed access to screening, treatment and care, limited access to contraception and pregnancy termination, and heightened levels of discrimination and gender-based violence, including at the border, in transit and in detention, and including for LGBTI migrants.

This means at-risk mothers are not identified and supported, putting undocumented women and their babies at greater risk of complications. It also means prevention and treatment of sexually transmitted infections are undermined.

Restricting access to healthcare violates individuals’ human right to healthcare, is economically unsound and contrary to national and international medical standards of care. In short, it’s not only wrong, it’s bad policy.

Sexual and reproductive health is a right that applies to all adults and children, regardless of residence status, sexual orientation or gender identity.

The Sustainable Development Goals, which equally apply to EU countries, also encompass several targets related to sexual and reproductive health – recognition that they are critical to individual development, but also to addressing poverty and global inequality.

Both the EU Fundamental Rights Agency and the Council of Europe, as well as the UN Secretary General and the UN Special Rapporteur on the Rights of Migrants, have argued for governments to establish a ‘firewall’ separating the provision of basic services from immigration control.

In practice, this requires limiting the sharing of personal data between health care providers and institutions and immigration enforcement authorities so that undocumented migrants can to go to healthcare facilities without fear of being arrested.

Civil society is doing admirable and sometimes heroic work to fill the gaps. But healthcare is a right, and it is states that have a duty to ensure that it is respected, protected and  fulfilled for all within their borders.

Meeting this duty requires reforming laws and policies that undermine access to sexual and reproductive services for those who need it, whatever their migration status.