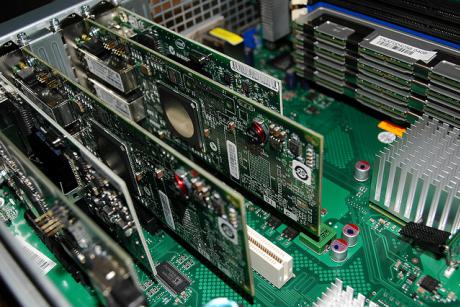 "The digital entrepreneurial spirit is not nearly as widespread as it seems to be," said David Deissner, Director of Strategy & Programs at the Vodafone Institute for Society and Communications. [Axel Schwenke/Flickr]

A recent survey shows young Germans are more optimistic about their future than their European counterparts. But roughly two-thirds of Germany’s 18-30 year-olds rule out the idea of founding a company in the digital economy, with Italian and Spanish young adults more likely to start a tech business. EURACTIV Germany reports.

A majority of Germans between the ages of 18 and 30 see the Information and Communications Technology (ICT) sector as offering the best job prospects. However, 33% of them have absolutely no intention to seek a career in the fast-growing sector.

These are among the findings of a study conducted by the Vodafone Institute, Talking about a Revolution: Europe’s Young Generation on Their Opportunities in a Digitised World.

In the survey, only 13% of young adults in Germany said they would definitely be open to pursuing a career in the area of digital information and communication technologies.

In addition, a majority of “digital natives” in Germany said they would not be willing to work for a startup (70%) or to found a company in the digital economy (77%).

In crisis-ridden countries like Spain and Italy, the willingness to do so is considerably higher.

Meanwhile, 43% of Germans surveyed assumed they would have a better life than their parents. In Spain, this amount made up only 29% and in Italy 23%. The economic situation in the individual countries had a strong impact on these results. While young adults in Italy and Spain saw digitalisation as a positive factor for their own future, and a possible way to escape unemployment, this was not as true for Germans. The latter was viewed as an opportunity in their eyes, but not for themselves.

David Deissner, Director of Strategy & Programs at the Vodafone Institute for Society and Communications said, “The results for Germany give the impression that the generation of 18 to 30 year-olds is not aware that the digital revolution has not even really taken off yet. The digital entrepreneurial spirit is not nearly as widespread as it seems to be.”

Young adults assessed the competitiveness of their countries of origin quite differently. In Spain, 49% of 18 to 30 year-olds feared for their country’s competitiveness and loss of jobs resulting from digitalisation. In Italy, this group made up 60% of those surveyed.

Being a digital entrepreneur in Germany is too much work

Interest in starting a business, and working in a newly-established firm, turned out to be particularly high in Italy and Spain. The same applied to interest in starting or working in the digital sector. 35% (Italy) and 32% (Spain and Czech Republic) of respondents who were interested in starting their own business indicated the difficult labour market conditions as an important reason. In Germany (18%), the United Kingdom (24%) and the Netherlands (20%) this factor played a less significant role.

If young Germans decide to start their own business, they cited such factors as hoping to realise their own ideas (44%), being their own boss (38%) or hoping to earn more money (29%) as the top three most important reasons.

The following three reasons were used to describe why young Germans decide not to start their own business: it is too much work (46%), threatens the balance between work and private life (43%) or concerns over a perceived lack of previous work experience (40%).

One in five young Europeans has lived abroad

Across all six countries included in the study, one in five young adults has lived abroad. This means a substantial group in the younger generation has grown up as a mobile European. Young people from Germany (25%) and Italy (24%), for example, are particularly drawn to foreign countries. The lowest percentage was in the Netherlands (17%).

The statement “I plan to move to another country in the future because of better job opportunities”, was agreed to significantly more often by young Italians (61% ‘yes’), Spanish (58% ‘yes’) and the Czech Republic (42% ‘yes’). In Germany, 27% answered the statement affirmatively.

The number of digital jobs is growing, by 3% each year during the crisis, but the number of new ICT graduates, and other skilled ICT workers, is shrinking.

As a result, Europe faces both hundreds of thousands of unfilled ICT jobs in the future as well as declining competitiveness.

Vodafone Institute Survey "Talking about a Revolution: Europe´s Young Generation on Their Opportunities in a Digitised World"