Ansip threatens to suspend Safe Harbour data agreement with US 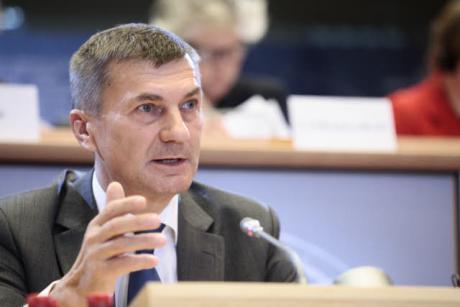 Commissioner-designate for the Digital Internal Market Andrus Ansip was drilled by the European Parliament in a hearing on Monday (6 October). [EP]

Commissioner-designate for the Digital Internal Market, Andrus Ansip, hopes to rein in large-scale transmission of personal data to the United States, winning visible support in the European Parliament, where he was dubbed “the real Digital Commissioner”. EURACTIV Germany reports.

“Trust is a must” chimed Andrus Ansip during his hearing before the European Parliament on Monday (6 October) in Brussels.

As Vice-President of the Commission with the Digital Internal Market portfolio, Ansip said he hopes to restore Europe’s place as a global leader in the digital economy, creating hundreds of thousands of new jobs while giving the highest priority to data protection.

“As a liberal, I believe in personal rights,” said the former Estonian Prime Minister.

“We must protect everyone’s privacy. Data protection will be an important cornerstone of the Digital Internal Market. The citizens must have trust in this project,” Ansip said.

The 57-year-old said he plans to promote rapid implementation of the Data Protection Directive and put pressure on the 28 heads of state and government, to finally come to an agreement.

Ansip also said he would not rule out suspending the so-called Safe Harbour Agreement with the United States.

“Safe Harbour is not secure. The Agreement has yet to live up to its name,” Ansip criticised.

The Agreement regulates transmission of personal data from European to American companies. American firms can register with the U.S. Department of Commerce and commit to certain data protection guidelines.

3,246 firms have registered since September 2013, including giants like Facebook, Microsoft and Google. According to Ansip, the United States should provide more specific conditions in an escape clause allowing restrictions to data protection on the basis of national security.

“If the U.S. Government does not make a clear statement, we must consider suspending the Agreement,” said Ansip.

A significant majority in the European Parliament voted in May, to suspend the Safe Harbour Agreement as a reaction to the NSA revelations by whistleblower Edward Snowden.

A key project for the EU Commissioner-designate Ansip is reforming the rules for a single telecommunications market. But so-called net neutrality has been a bone of contention for many critics, including in the European Parliament, who fear the measure may be left out.

Ansip promised to stay true to the principle. “All internet traffic must be handled equally. Nobody has the right to exploit a dominant market position,” Ansip explained.

Higher speeds for a higher price are acceptable, Ansip pointed out, but not at the burden of those who already operate on low internet speeds. However, the Commissioner-designate was not clear on whether higher costs would be applied to consumers or content-providers.

Ansip was particularly critical of geo-blocking, that often prevents internet users from accessing digital content outside a licenced area, such as in other EU countries.

“Geo-blocking is unacceptable. If I can watch football matches from Estonia and not from Brussels, that is simply unfair,” Ansip said.

Commission chief Jean-Claude Juncker chose to give Ansip the Digital Internal Market portfolio for a reason. Between 2005 and 2014, Ansip was Prime Minister of Estonia, a country that has stood out as a European leader in digitalisation.

There, e-Government has been introduced, digitalising public administration. In the Baltic state, for example, digital signatures are considered equivalent to hand-written signatures.

The Estonian also did not miss a chance to praise his home country as a digital role model. But, he said, in the long-term Europe does not need 28 national IT borders, but “a true internal market” that will lead to the digitalisation of all public services at all levels – even in the EU institutions.

In the hearing, Ansip expressed high hopes for the digital internal market. He said breaking down trade barriers and harmonising legal frameworks could create around 900,000 new jobs by 2020.

Dismantling barriers in electronic trade, he said, would boost Europe’s economic growth by 1.7% per year.

Vice-President to “lead and guide”

But numerous other political challenges are linked to the mammoth digital internal market project. These include modernising copyright law, accelerating broadband expansion and creating simplified rules for online shopping.

As Vice-President, Ansip will be in charge of the big issues, while his junior Commissioners V?ra Jourová (Justice, Consumers and Gender Equality) and Günther Oettinger (Digital Economy) will provide support.

“I will handle this just as I did as Prime Minister. I will lead, coordinate and guide,” Ansip indicated, adding that the two other Commissioners will takeover “organisation and management” in the sub-areas.

“Ansip knows what the challenges of digitalisation are really about and that data protection and net neutrality are not a contradiction but a precondition for a lively digital market,” praised Green MEP Jan Philipp Albrecht in a statement for euractiv.de.

Now it is up to Ansip, to make these strong words reality and use his experience in Estonia to mobilise Europe’s 28 heads of state and government to take the necessary big steps, Albrecht said.

Conservative MEP Andreas Schwab called on Ansip to hold his ground when dealing with the member states.

Meanwhile, he said, the Commissioner must act in a more European way. “As impressive as the results from his home country might be in the digital area, Ansip must demonstrate a strong determination to break free from national perspectives and put a true European spirit into his work,” said Schwab, EPP Group Spokesman in the Committee for Internal Market and Consumer Protection.

Online hearing “for all”

In the run-up to Monday’s hearing, Ansip repeatedly promised proximity to the citizens. Before his possible election by the European Parliament in November, the Estonian hopes to fulfill his promise. In the coming weeks, he intends to hold an online-hearing in question and answer format. Details have not yet been revealed.

“Designated members of the European Commission directly facing questions from the population is an absolute novelty”, said Julia Reda, MEP from the Pirate Party.

“If Ansips words are followed up with actions, this is a next step towards expanding democracy at the EU level, increasing the Commission’s legitimacy.”

The European Parliament is interviewing 27 candidates for the new Commission team, starting on 29 September, until 7 October. The MEPs test the candidates' expertise and competences during a three-hour public hearing in the committees that deal with their portfolio. Each committee then publishes an evaluation report that will support a nomination, or reject it.

A final decision is scheduled to take place in the Parliament on 22 October if all the nominees get the support of the main committee. If one or more candidates receives a negative assessment, (which has happened in the past), the approval process will be delayed until Parliament finds new candidates. You can find a calendar of hearings here.