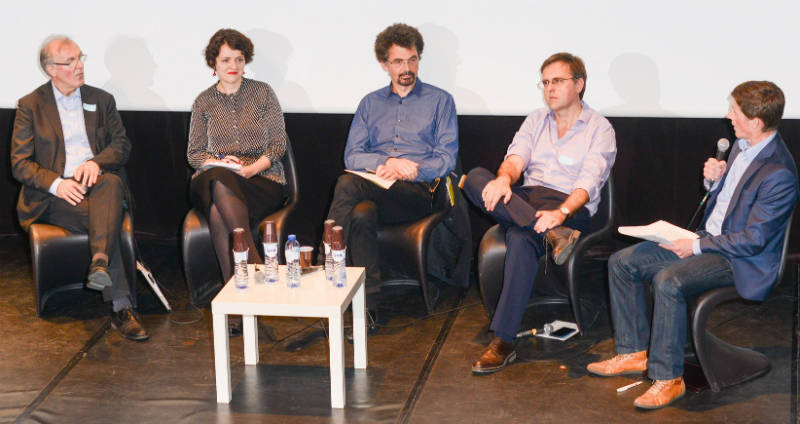 Difference Day : Panel on A Europe page in every newspaper [Flickr/VUB]

SPECIAL REPORT / European specialist media companies are offering contrasting strategies for coverage of European affairs against a backdrop of crisis, executives said at an event staged on World Press Freedom Day (3 May) in Brussels.

In a session at the event called Difference Day on European media – titled “A Europe section in every newspaper” – VRT Europe correspondent Rob Heirbaut asked media commentators how they thought European specialist media was faring.

Heirbaut said that he had witnessed several attempts at establishing such specialists EU-focused news services failing during his professional career (see background).

Thomas Friedrich – a member of the council of the international press association (API/IPA) and Brussels correspondent with VDI-Nachrichten – said that one of the key problems with offering such a service direct form Brussels was language.

People preferred to read news in their native tongues rather than in one language, despite the prevalence of English.

Matthew Kaminski, the executive editor of Politico Europe, said that the US outfit’s strategy was to offer a niche service in English examining power politics from the angle of the personalities involved.

“We want to be a guilty pleasure for power brokers,” he said, explaining that Politico was aiming itself at a relatively small audience of Europe’s key influencers.

EURACTIV’s strategy, he explained, was to cooperate with media in the member states and offer a devolved web service in 12 languages, since in his opinion an offering in English alone was unlikely to gain purchase with readers across the different capitals.

The seminar took place against the backdrop of discussion of wider difficulties with the media sector.

All forms of contemporary media are “desperately seeking a new model” to stave off competition and the relentless decline of advertising revenue, French academic Julia Cagé told delegates at the event in a keynote address.

Cagé proposed the creation of a new non-profit news corporation blending elements of a charity foundation with a commercial enterprise.

She said such a structure – to be described in detail in a forthcoming book called ‘Sauver Les Medias’ (‘Saving the media’) – would enable media to work independently from external shareholders, advertisers and government.

Both Politico and EURACTIV suggested that their media were moving against the grain of the established media models.

Kaminski said that Politico had been established as an antidote to the traditional press by journalists disenchanted by the Washington Post’s ability to move with the times.

The crisis offered the media sector the chance of radical change, said Leclercq, who said EURACTIV’s Innovation4Media initiative was a response to the need for media to operate avoiding both working subsidies and over-regulation.

The event included the inauguration of the “Honorary Title for Freedom of Expression”, which was awarded to the Saudi Arabian dissident blogger and activist Raif Badawi.

His wife will accepted the prize by video link, since Badawi remains imprisoned in Saudi Arabia for standing up for freedom of press.

The event was held at the BOZAR by the Brussels Platform for Journalism – a collaboration between the Belgian universities VUB, ULB and Erasmushogeschool Brussel, with the backing of UNESCO.

Long before the economic crisis struck, the media landscape was undergoing fundamental structure change. The major losers have been print publications as advertising revenue migrates to online platforms.

However, media critics say a deeper malaise has taken hold, with media cutting back on the production of original news content. In Brussels, for example, the number of journalists covering EU affairs has been shrinking.