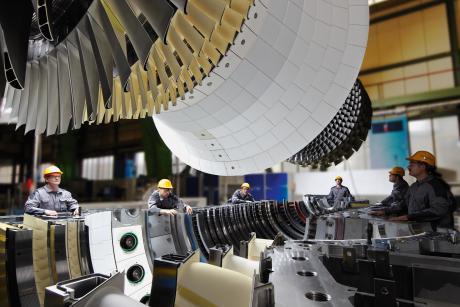 In a rapidly changing economic environment, a new alliance of German politicians, unions and business associations is planning to put fresh wind in the sails of the country’s industry.

“A competitive industry and high quality industrial jobs are central to Germany as a business location,” Gabriel said at the opening event. The alliance also hopes to improve conditions for TTIP and renewable energy sources.

According to representatives from industry and politics, more public interest in industry is needed.

“My goal is that we in the alliance initiate a social offensive for industry investments and jobs, as well as for larger social acceptance in Germany,” said BDI’s Grillo.

IG Metal’s Wetzel emphasised that the alliance partners should concentrate on the issues they can agree on.

“If we agree on clear rules and structures and avoid everything that leads to a policy of excessive demands on each side, we will be successful together,” Wetzel explained.

Industry makes up an important branch of the German economy, worth about 22% of the country’s gross value added. About 100,000 companies employ eight million people and supply around three-fourths of Germany’s exports.

For this reason, the German government wants to found a consortium, “Industry 4.0”. German Chancellor Angela Merkel has assigned the head of the Telekom Timotheus Höttges and SAP chairman Bernd Leukert the task of building an industrial partnership, as a counterbalance to the American-dominated Industrial Internet Consortium (IIC).

Aside from the future-oriented Industry 4.0, “classical” branches must also be supported, according to the latest numbers revealed by the German Economic Affairs Ministry on Thursday (5 March) in Berlin.

The statistics showed that industrial contracts decreased by 3.9% in January compared to the previous month. This was due to a lack of large-scale contracts – four times more were expected.

“So far the German economy is running on one cylinder, and that is private consumption,” said chief economist at HSBC Trinkaus, Stefan Schilbe, in light of the disappointing development.

A study by the Cologne Institute for Economic Research (IW), on behalf of the BDI, determined in January that Germany will increasingly have to accept losses in its share of global industrial value creation.

The newly created “Future of the Industry” alliance hopes to change this as quickly as possible.

Five working groups hope to compile recommendations for action on key issues of acceptance of industry, strengthening investment activity, future of work in industry and industry-oriented services, added value structures of the future and the international competitiveness of German industry. All are expected to be discussed in autumn at the next meeting.