Germany’s Transportation and Digital Infrastructure Minister Alexander Dobrindt is campaigning for the removal of European roaming fees for mobile phones. “It should not make a difference for the consumer, whether he moves beyond national borders while using digital services,” the conservative politician told Bild.

Dobrindt is calling for EU-wide foreign roaming fees to be phased out for mobile phones.

Within the EU, different rules apply for around 200 different telecom companies. Their over 510 million customers pay different fees. Estimates indicate around 0.9% of the EU’s GDP are lost in the fragmented telecom market, amounting to €110 billion per year.

In April 2014, the European Parliament voted to eliminate roaming fees by mid-December 2015, as a part of the telecommunications package “Connected Continent”. But so far, the EU member states have not set a date for agreeing on a common position.

Dobrindt’s desire to eliminate roaming fees, could now give the measure a boost towards approval in the Council.

After much pressure from the EU, fees from telecom providers have fallen drastically in recent years. Since 2007, final prices for calling and texting in other EU countries decreased 80% for consumers, while data roaming prices fell 91%.

Nevertheless, 28% of Europeans still turn off their mobile phones when they enter another EU country to avoid roaming fees. 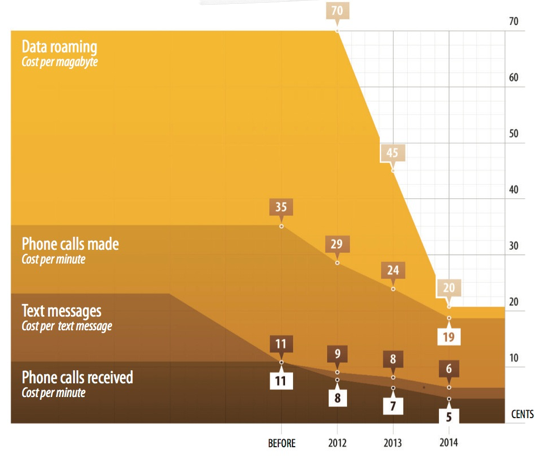 Meanwhile, high-tech associations and economic experts are warning against removing roaming fees. Without these additional costs, prices for domestic phone calls and mobile internet use would have to increase. Subsidisation of smartphones, tablet computers and mobile phones by network operators would also suffer reductions, experts say.

“Removing roaming fees would send the entire price structure for mobile communication spinning,” Andreas Streim, an expert at the industry association BITKOM said in 2013. “The ones who will suffer are lower income segments of the population, who do not travel much and currently profit most from low fees for domestic calls.”

The European Consumer Organisation (BEUC) considers operators’ concerns to be unfounded, even seeing potential economic advantages in an elimination of roaming fees.

“Almost three-fourths of Europeans hesitate to use their mobile phones abroad. As a result, a completely untapped market exists here. So operators should not fear the end of ‘roaming times’,” said Monique Goyens, the head of the BEUC.

Whether the 28 EU member states quickly come to an agreement on roaming fees, also depends on the debate over net neutrality. The issue is also included in the telecommunications package “Connected Continent”, along with roaming fees.

The European Parliament in April 2014 spoke in favour of the principle of net neutrality.

But German Chancellor Angela Merkel has not been as strict about the neutrality principle. She has said, there should be an open internet for all in the future but, at the same time, she hopes to allow for the development of special services.

Under this model, the government says network providers would continue to offer a fast and judder-free network for normal users. This would ensure net neutrality. But once this basic service is provided, the government would allow companies to sell access to faster data highways at a cost.

"Net neutrality" is a term referring to the freedom users have to access online services, such as Skype or Spotify, without experiencing a slower-than-usual connection.

The issue became widely known when regulators began accusing internet access providers, such as telecoms or cable firms, of slowing down traffic for specific services.

Reasons to do so can be many. Net neutrality paladins accuse ISPs of slowing free services to favour paid platforms. If this trend continued, the Internet would become something very different from the free environment it is nowadays, they claim.