Günther Oettinger: ‘We are in the midst of a revolution’ 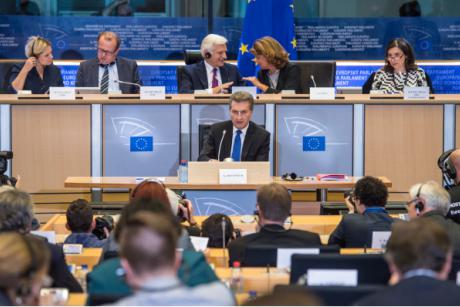 German Commissioner-designate for the Digital Economy and Society portfolio, Günther Oettinger, was grilled by MEPs on Monday (29 September) in the European Parliament, where he called on the EU to catch up with international competitors and commented on leaked celebrity “selfies”. EURACTIV Germany reports.

“We are in the midst of a revolution,”  Günther Oettinger told the European Parliament on Monday (29 September). “Digital technologies are changing the world and our lives completely.”

This week, the Parliament began hearings to evaluate Commission President Jean-Claude Juncker’s EU Commissioner-designates. German Commissioner Oettinger has been chosen to join Juncker’s team in charge of the portfolio on Digital Economy and Society.

Online audiences are already familiar with the former Energy Commissioner, notorious for his poor English, though many videos circulating online are now more than four years old.

During the three-hour hearing before the European Parliament Monday evening, Oettinger only spoke in German.

The 60-year-old received questions primarily in his native German, due to the high number of German and Austrian MEPs in attendance.

In reference to Oettinger’s language skills, Martin Sonneborn, former editor-in-chief for the satirical magazine Titanic, and MEP for The Party, asked if the Commissioner would reply to his question in English.

Sonneborn asked whether Oettinger would promote the “right to be forgotten” online during his term as Digital Commissioner. How would Oettinger, Sonneborn wanted to know, erase evidence that the nominee had been forced to give up his driver’s licence with a BAC of 1.4 per mille, for example?

“I intend to answer your question, but will only accept your demands to a limited degree,” Oettinger replied cooly in German.

It is a person’s basic right to be able to request and delete facts and data, whose availability is not in the public interest, the conservative politician replied.

Oettinger said he stands in favour of the Commission proposal on the “right to be forgotten” and will continue to support it.

The fact that he lost his driving licence a quarter of a century ago is true, Oettinger said. Because it is also written in newspapers, this fact can never be forgotten, he added.

“But whoever is in politics must be measured by their successes and failures as long as they live,” the German politician emphasised. For this answer, the digital commissioner-designate received resounding applause in the plenary.

But near the end of the hearing, Oettinger’s remarks on naked celebrity photos, hacked from smartphones and computers, were followed by startled murmurs among MEPs.

Speaking about opportunities and risks related to digitalisation in citizens’ daily lives, Oettinger said he had a “semi-serious” example. “It simply cannot be, that complaints are rising over the naked photos of celebrities who took ‘selfies’.”

Whoever “is stupid enough to put a naked photo of themselves on the Internet, cannot expect us to protect them”, the conservative politician said. People can only be protected from their stupidity to a certain extent, Oettinger commented.

Europe “is lagging behind”

Otherwise the hearing was a fact-based and serious event.

“I am convinced that successful digital policy can only be European and jointly-driven,” explained Oettinger in his introductory statement. “Today, and over the next few years, I will make an effort to prove that a European solution is better, faster and more cost-effective in all areas.”

Together with two directorates general and numerous other service points, Oettinger said Commission President Juncker charged him with the task of leading “bundled digital work”.

Joining forces is important, the German Commissioner said, so the Commission can continue its work from “a single mould’.

While Europe has “strong assets”, it is lagging more and more behind countries like the United States, and many in Asia.

Over the next three to six months, Oettinger said he hopes to meet with MEPs to discuss what can and cannot be done at the European level.

On many occasions, he also emphasised his readiness for close cooperation between the Commission’s work, and that of the European Parliament.

Meanwhile, MEPs peppered him with questions on a whole range of issues.

Besides the issue of roaming and internet neutrality, copyright law was a primary concern. “I stand for reliable protection of copyright,” Oettinger said.

“We must adequately protect the creator, so these creators will still exist tomorrow. On the other hand, users in the digital world are interested in gaining access to all cultural products.” This requires finding a delicate balance, Oettinger said.

“I will commit to working on a draft law, finding a balance for European copyright law in the context of the digital world,” the Commissioner designate said.

But the European Commission’s proposal on the issue of copyright, Oettinger said, is “among its most difficult” legislative proposals.

“A significant amount of preliminary work was done in numerous DGs. Now, all these areas are covered by one DG. But that does not mean I will be hurrying things up now,” he said.

The copyright issue will only receive a majority in the European Parliament and have authority in society, if all who have a cultural or private interest are included in the process, Oettinger explained.

If the Parliament makes recommendations, Oettinger said he is prepared “to listen to other groups or individuals”.

“Thoroughness comes before speediness, in this case,” the German politician explained.

Only after two hours, the hearing took on the issue of data protection. What will Oettinger do to tackle uncontrolled access of third-countries to sensitive data among EU citizens, one MEP asked.

“Fragmented national data protection schemes can be circumvented and do not make sense anymore,” the Commissioner designate replied.

An EU draft regulation on data protection has been tabled, he said, calling for consultations as soon as possible on the measure. But the task is being guided by his colleague, Oettinger indicated, explaining why the issue is not a focus of his own agenda.

“Data protection only works as a European construct. We have introduced relatively high standards in the draft legislation.” Now it is up to the individual member states, who have been hesitant in the past, to agree to this proposal, Oettinger pointed out.

That includes Germany, the former state Prime Minster of Baden-Wuerttemburg told the Parliament. “Continued delays, observed over the last few years, will no longer be acceptable,” he said.

In conclusion, Oettinger expressed his gratitude before MEPs “for the fairness” with which he had been approached. “I am impressed by the quality, with which you address these issues, the intensity, with which you represent positions here and your expectations for cooperation with the Commission in the ongoing process and future recommendations,” the Digital Commissioner-designate said.

When Oettinger addressed reporters shortly after the hearing, he spoke only in English.