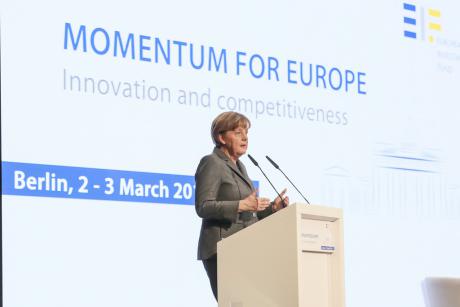 "The Juncker plan, alone, is not enough," Merkel said on Monday (2 March), calling for structural reforms and austerity to accompany the Commission President's growth initiative. [EIB]

German Chancellor Angela Merkel on Monday (2 March) expressed her support for the European Commission’s €315 billion investment push, but stressed the plan must be accompanied by reforms and austerity measures among eurozone countries. EURACTIV Germany reports.

“The Juncker plan stands for a paradigm shift in the European Union. We support the initiative,” Merkel said at an event hosted by the European Investment Bank (EIB) in Berlin.

Merkel indicated that investments play a key role in overcoming weak growth in Europe. As a result, she said, Germany has decided to use almost all the financial leeway available on spending that stimulates growth.

And to the extent that further budgetary margins emerge, “we will continue to further update this,” Merkel indicated.

Still, the investment plan does not suffice to strengthen competitiveness in Europe and specifically in the eurozone, the Chancellor said. What is necessary instead, are further budgetary consolidation and structural reforms, she explained.

“We assume that from now on, everyone will adhere to the established rules,” Merkel stated. Consistent savings and growth do not cancel each other out, she said.

Turning to domestic debates, Merkel called for more openness in the EU’s free trade talks with the United States (TTIP) and and Canada (CETA). One look at Asia is enough to see what is happening with regard to free trade agreements, the Chancellor indicated. There, economic powers like China and the United States are concluding a whole collection of agreements, she pointed out.

“We will work intensively with the European Commission to get CETA and TTIP off the ground. The window of time is not endless,” Merkel said.

Juncker: We must ‘get out of the investment hole’

According to Commission President Juncker, who was addressing the EIB conference in Berlin, Europe is currently stuck in an “investment hole”. That not only applies to the crisis-ridden countries, but also leading economies like Germany, he said. EU-wide investment is at 15% under the level from 2007.

“We must finally get out of this investment hole,” Juncker said at the EIB Conference.

With the help of a €21 billion guarantee fund, collected from EU budgetary funds and from the EIB, Juncker hopes to accumulate a total of €315 billion in investments from the private sector by 2017.

According to Juncker, this can increase the EU’s economic performance by up to €415 billion and create 1.3 million new jobs over the next three years. The project’s priorities are clear: transportation, energy, research and the digital economy.

But Juncker also called for more efforts from the member states. “Whoever believes that investments are enough to create growth is completely wrong,” the Luxemburger said. The EU countries must improve the investment climate, he explained, dismantle bureaucracy and promote the energy union and the digital internal market.

“If we do not display the same level of commitment here, then the plan will remain only a plan,” Juncker warned.

Annual investment gap of over €500 billion

EIB President Werner Hoyer estimated the necessary EU-wide investments at more than €500 billion per year, with €130 billion only for research and development. Europe is falling far behind its international competitors in many areas. “A new industrial revolution is taking place,” Hoyer said. “It is time to put the crisis mode behind us.”

Hoyer and Juncker both seemed certain that the legislative preparation for the upcoming initiative would be wrapped up by summer so that “the thing can be standing in autumn”. But collective action from the EU, member states and private economy is still needed, they said, “join in, all of you, otherwise it will not amount to anything”.

Jean-Claude Juncker has announced a plan to mobilise €315 billion in an effort to kick-start the European economy.

Boosting the Luxembourg-based European Investment Bank's (EIB) capital is the central part of the plan, which involves creating a European Fund for Strategic Investment (EFSI), as well as tools to allow the EIB to take greater risks in its investments.

The details of the plan were given in November, and presented to EU heads of states at a European Council meeting in December.

But divisions soon became apparent, notably over Juncker's promise to "neutralise" national contributions to the EFSI under the EU's strict budget rules, which limit public deficits to 3% of GDP.

0 responses to “Merkel: Juncker plan does not preclude structural reforms”