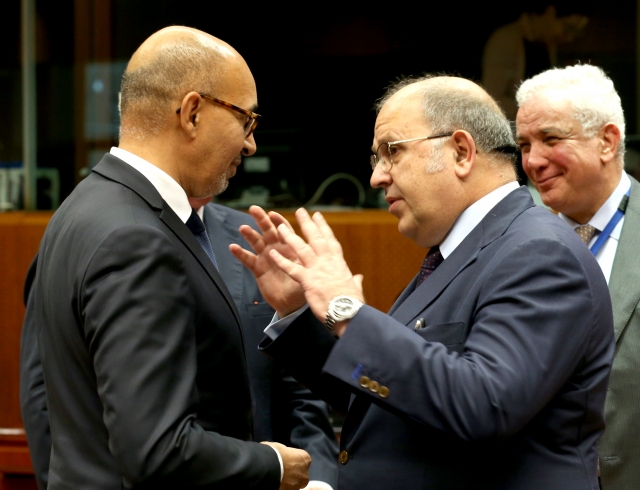 The new European Border and Coast Guard Agency should be responsible for the full management of refugee and migration flows, while respecting the national sovereignty of the countries in which it operates, Nikos Xydakis told EURACTIV Greece in an exclusive interview.

Xydakis spoke to Sarantis Michalopoulos ahead of the EU summit yesterday (17 December).

What was discussed during the mini-summit with Turkey that was held prior to the European Council meeting?

Initially, it was an initiative of the Austrian Chancellor, Werner Faymann. What they tried to do is consider how to practically apply the action plan recently agreed between the EU and Turkey. We exchanged views on how to proceed with the agreed measures step by step, and how to monitor the implementation and performance.

We also discussed how quickly and effectively we will speed up the bilateral and multilateral readmission agreements, and how to set up new ones.

It was found that there are new routes and new compositions [in migration flows]. The people who now come from the Turkish coast to the Greek islands are from the Maghreb. Let me give you an example. In August, we had 40-50 Moroccans, and in November, their number was over 7,000.

We have people mainly from Morocco, Iran, and Algeria – people who are not granted refugee status, as they are not fleeing from war, and humanitarian crises. There is a serious problem.

What was Turkey’s stance?

Yes, but the EU has one with Turkey.

Yes, but it’s not implemented. It will take effect from June 2016 and is one of the criteria. Depending on the progress and performance of the [EU-Turkey] agreement, it will be a criterion to start readmission faster.

Turkey should check the people who enter its territory from many countries, mostly Arab and Islamic, without a visa.

The route we have identified is the following: Moroccans and Algerians can travel without a visa from Maghreb countries, with a very cheap ticket with Turkish Airlines, directly to Constantinople [Istanbul], and then they easily reach the coast and go to the other side [Greece].

What’s the EU stance regarding the implementation of the readmission agreement by Ankara?

Nobody knows. There is cautious optimism. According to Frontex information, immigration flows have decreased following the agreement, but so little that we cannot draw any conclusions. We reasonably assume that this decrease could mainly be attributed to bad weather conditions. We see what will happen in the coming weeks.

But three weeks after the agreement reached on 29 November [the EU-Turkey Summit], we see no impressive decrease.

During the EU-Turkey Summit, Ankara managed to revive EU accession talks, speed up the adoption of a visa-free regime for Turks to travel to the EU, and get €3 billion.

It didn’t get three billion. It will do so in the future. All these are “will”. They are agreed and “will” in accordance with the results.

So, if Turkey does not comply with the agreed on deal, Greece is ready to block it.

Not Greece, but Europe will do so. Greece is part of a set of 28 countries. Everyone has the same interest, because everyone agrees to pay the political price, to give the political opportunity to Turkey and pay money for that.

Everyone is asking Turkey to comply, and help with the situation.

What are Greece’s red lines for the summit? As far as I know, Athens wants the consent of the member states in order for a European border force to intervene, and the replacement of “joint ventures” with “joint cooperation” in the final text. Is there anything else?

You are right, but these are not only Greek arguments. At the General Affairs Council on Tuesday, there were six ministers from Spain, Hungary, Poland, Denmark, Cyprus and Greece. There are many countries, and basically almost all countries with external borders. They all know what it means to guard sea borders, and all express a desire to create a common border guard.

Greece was the most supportive country of the Frontex. We are the ones who have sent the highest number of invitations to Frontex, and the most chances to develop its forces. Frontex almost owes Greece its existence, and secondly, Italy.

The only “rapid operation” took place in Evros at the Greek border in 2010, as well as the first Poseidon operation, followed by Joint Operation Triton.

Do you think that these countries can actually influence the final text regarding the new, reinforced Frontex?

Anything is possible, because we are now starting a discussion that needs to go in depth, and to consider all aspects.

If the formation of an organisation and its internal regulation touches the core of national sovereignty and European treaties, it is an issue that needs serious consideration and discussion.

It’s not simple. When a state grants its sovereignty, it should take something back as an exchange, in terms of security and rights.

What does Athens want as an exchange?

Look: There are some things that can never be granted. There is a great theorist of the philosophy of law, Carl Schmitt, who was also accused of having collaborated with the Nazi regime, who defined as a sovereign person anyone who has the power to declare an emergency.

If a state grants the ability and the right to declare an emergency situation, it is a very serious action regarding the Constitution, the essence of sovereignty, under what criteria and what who can do?

These are reservations expressed by all EU member states.

Is Athens under pressure from Berlin to back down on the issue, as European media report?

There is no such thing, neither formally nor informally. In recent weeks, there has been a dispersion of an inaccurate and false image that Greece does not cooperate and refuses the EU’s help. Both are incorrect and false.

Greece has complied on all agreed decisions. It has frequently requested help, and has received very little of what has been requested.

Throughout this refugee explosion, Greece had been at the front line alone, and helpless. It has received help, but also many promises. But so far, we have faced 700,000 people within 100 days alone.

Even the best organized EU state could not face it.

Do you believe that the attitude of the European Commission during the refugee crisis has been too intrusive on sovereignty issues? Jean-Claude Juncker said that his Commission would be more “political”. For instance, some member states complained that no consultation took place before the 3 billion deal with Ankara.

The French, but others as well, have said that it’s not possible that the Commission makes a decision, and afterwards, announces to the member states that they should take money from their national budgets for something. We need another approach. Nobody disagrees with the final act or the ultimate benefit, but many disagree on the approach.

S&D Group President Gianni Pittella recently said he was positive on the Commission’s border force proposal, but added that it should be accompanied with a legal revision of the Dublin system and a new permanent and compulsory relocation scheme for refugees, based on real solidarity and burden sharing between member dtates. Is this what Athens is asking for in exchange of the member state consensus issue?

We agree with both positions. This is not an exchange. The Dublin review is now mentioned by many sides, many political areas and many states.

When something does not work and overcomes reality, it has to be adjusted.

Regarding the second part, it is also our proposal. The new border body should not only be entrusted with border protection. It can’t only [engage in] suppression. It has to be responsible for all other functions related to the refugee issue.

It has to be responsible for returning illegal immigrants [to their countries of origin] in which Frontex participates, but [must expect] low results. Member states and Frontex are faced with disbelief and denial, for example, by the Pakistani authorities.

A plane with 70 Pakistanis from Greece, Austria, and Bulgaria [starting from Greece] landed in Pakistan, and half of them were sent back because they didn’t have any documents. But we know that they had documents provided by Pakistan embassies.

So we want this new body to participate in returns, relocation, and resettlement.

It must take the responsibility for the entire management; it cannot only protect the borders. Who will do other jobs that are time-consuming, costly, [that is] legally and diplomatically complex?

So this European body, which will have the EU’s blessing, will have much greater political power to do these things.

Pittella’s statement is in the right direction, and we fully agree. Why was the sovereignty issue raised? Nobody denied Frontex’s help.

Greece has never been opposed to a common European action. It has always been the most supportive, andmin Greece, Frontex was given the substance and scope of action. Greece would have no objection to changing its mandate.

But there is a precondition: to take the whole management package of migration and refugee flows, not only border protection. Secondly, granting sovereignty cannot take place in such a sketchy and blackmail (sort of) way, I would say. These things cannot be done.