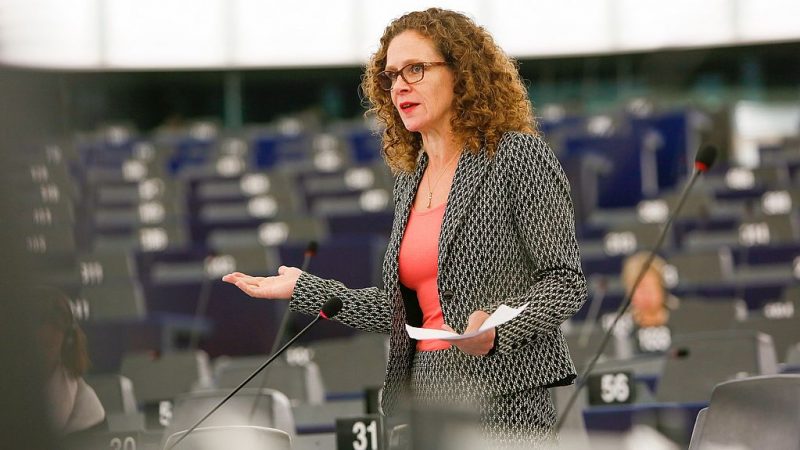 MEP Sophie in ‘t Veld during a plenary session in Strasbourg. [European Parliament]

In an exclusive interview, MEP Sophie in ‘t Veld shared some insights from Thursday’s (27 January) European Parliament Rule of Law and Fundamental Rights Monitoring Group (DRFMG) session, which she chaired, where the Bulgarian Prosecutor General Ivan Geshev and the new Prime Minister Kiril Petkov were auditioned.

Sophie in ‘t Veld (Renew, Netherlands) is a member of the Committee on Civil Liberties, Justice and Home Affairs and chairs DRFMG, a group focused on threats to democracy, the rule of law and fundamental rights, as well as the fight against corruption within the EU. DRFMG builds on the work completed in the previous parliamentary term by its predecessor, set up in June 2018 following the murders of the Maltese blogger and journalist Daphne Caruana Galizia, and the Slovak journalist Jan Kuciak and his fiancée.

It was a closed session, but still, can you share your impressions? The Bulgarian Prime Minister and the Prosecutor General spoke to the press and unsurprisingly, their messages were antagonistic.

I cannot quote from the meeting, it was an in-camera session and it would be improper for me to do that. I will say some general remarks. First of all, although we recognize that the problems in Bulgaria are massive, I think we all came away from the meeting encouraged by the determination and the plain language of the government. It’s clear – and that doesn’t come from the meeting, it’s in the public domain – that the public prosecutor is deeply unhappy with the proposed reforms, he strongly disagrees with them, and on the other side, there are calls for his resignation. But the facts speak for themselves. This meeting coincided more or less with the publication of the annual index of Transparency International [the Corruption Perceptions Index for 2021 ranks Bulgaria as the most corrupt country in the EU, dropping two places compared to 2020] which clearly says that whatever are the efforts to defend the system, they don’t work, because Bulgaria has dropped again.

Can I ask you in a straightforward way what impressions Geshev and Petkov made on you?

I cannot say anything about the impressions they made.

I am asking about your personal impressions.

It’s awkward, I’m very much in favour of transparency, but it was an in-camera session and also feel it would be strange if I came out. But there were concerns that had already been raised when I visited Sofia (in September 2021) and I think those concerns still persist. And that’s for example about some of the high-profile cases, including the “Gold Bar case” [photos from an unknown source sent to the media in June 2020 showed the bedroom of former PM Boyko Borissov with drawers full of bundles of €500 notes and a few gold ingots]. That was two and a half years ago and it doesn’t seem there is any progress in the investigation. That is deeply concerning. That’s an objective fact. And I think I can say that we all share that concern. That’s very obvious and until today, there is no answer, and that’s an objective problem.

Also, there is nothing new following the ruling of the European court, already so many years ago, about the unaccountability of the Prosecutor General [the 2009 case known as Kolevi against Bulgaria], about clinically rooted corruption with devastating consequences, and I will say this because I made myself the remark yesterday, when I was in Sofia, the thing that shocked me very much was that corruption has an impact on the quality of public services. And in the COVID period, public services deteriorated to the point that some people didn’t have access to electricity and running water. Then you are below what any democratic and civilized society is.

The Prosecutor General is not the only corruption fighter in the country, but he has a crucial role there. We still don’t have a follow-up to the Magnitsky case [The US Department of the Treasury’s Office of Foreign Assets Control (OFAC) in June 2021 sanctioned three Bulgarians for corruption in Bulgaria, as well as their networks encompassing 64 entities. One of them is Delyan Peevski, currently an MP.]

Do you feel comfortable that Delyan Peevski is a member of your own political family, Renew?

He is not a member of the European Parliament.

What will be the next steps following Thursday’s meeting?

We will continue to monitor, that means we will continue to have exchanges, hearings, written questions procedures with the government and others, there will be another visit, but it’s not for now. It’s an ongoing process. The next meeting is with GRECO [the Council of Europe Group of States against Corruption], they will be paying a visit to Bulgaria this year and it will be very useful to speak to them as well.

If people in the country get confidence in the government and in reforms, they get mobilised. And that’s the crucial ingredient of change. This is, I hope, where we can contribute. We are completely objective, we are on nobody’s side, we are on the side of reforms. And I have seen in Slovakia, in Malta, change has been extremely difficult, but we want to be on the side of people who want reform, who want to clean things up. In Bulgaria, I was impressed to see people who are so dedicated, who have so much energy and courage, and it’s very important for them to know that they are not on their own. The force they can mobilise is massive. And I do come away from yesterday’s meeting with a feeling of – optimism seems too light-hearted – but encouragement.

I find it important that people in Bulgaria realise that.