The current Brussels/Warsaw spat is not a war of words between Frans Timmermans and Poland (as the Polish government presents it) but rather a collective demand by a decisive majority of EU states to respect the rule of law, the first vice-president of the European Commission told EURACTIV’s partner Gazeta Wyborcza.

Frans Timmermans is the European Commission’s First Vice-President. Awarded the ‘man of the year’ by Gazeta Wyborcza, Timmermans is centre-stage in the dispute between Warsaw and Brussels over the rule of law. The EU’s executive arm accuses the nationalist-minded government of undermining democratic checks and balances, especially through its overhaul of Poland’s Constitutional Court.

He spoke to Bartosz T. Wieliński

Don’t you think sometimes that ‘Poland in Europe’ is over?

You don’t appreciate your nation. Poles love their freedom. An overwhelming majority wishes Poland to be a fully-fledged member of the EU. Opinion polls show that a majority accepts the role that the Commission plays in the current dispute with the Polish government. And the European Commission, being the guardian of the treaties sometimes has to be critical towards member states.

Many Poles sacrificed their lives for the nation’s freedom. I doubt that ever in your history you enjoyed more freedom than today. You owe it to yourself, but also partly to the EU. Cherish it, don’t waste it. Freedom is too important.

I always say that Poland should be a leader in Europe. But to lead one needs to cooperate with Europe. To see your own power and cope with the power of others. And above all to observe European principles, including the division of power and rule of law. Poland, not respecting those rules, harms and unnecessarily weakens itself. To make matters worse it causes tensions with other EU states and institutions.

Let’s only consider economic consequences. To make our internal market work smoothly we have to be sure that European law is observed equally in the whole EU. Independent courts are to guarantee it. If judges don’t know how to solve a given problem they ask for the ECJ’s opinion. But when courts in one state serve its government there’s no guarantee the law weighs the same in all European countries.

It’s easy to imagine a situation when a government makes a court rule according to its will, and a judge just says “Yes, sir” and follows the top-down order. This leads to legal uncertainty. European entrepreneurs stop investments, EU citizens stop buying homes. In a community, which the EU certainly is, everyone should have access to an independent court.

So I am asking: why Poland wishes to go in the opposite direction to others? How the EU courts operate vary in different countries, but the underlying rule is one: they are independent. Is it so that member states are wrong? Is the EC, the Venice Commission, other international organisations wrong to consider that courts have to be impartial? Why  does the Polish government does the opposite?

To ensure a full control over the courts.

So we are in trouble. As in this situation we cannot be sure that citizens will be judged fairly. While the right to an independent court is the fundamental right in the EU.

Over a year ago the Commission launched the procedure concerning violations of the rule of law by the Polish government.

Let me be clear on it, we will react to violations of the EU law, we have tools to do it. This concerns all the EU states, not only Poland. With Poland we have been in dispute over the Constitutional Tribunal for over a year, but from our perspective it hasn’t brought about results we expected.

However, I am ready to go further. For the first time member states had an opportunity to discuss this issue at the recent General Affairs Council. It was evident that the issue is extremely important to the decisive majority among them.

The Commission is not alone on this. Look at the Venice Commission, the EU, representatives of other constitutional tribunals and highest courts. We cooperate wishing to find a solution. We will offer a dialogue that – I have such a feeling – Polish government is now open to enter. Poland is destined to lead Europe. But only Poles themselves can fulfil this destiny.

In a free Europe that Poland joined after a very long battle of very courageous people in 1989, the system of power lies on three pillars. These are democracy, rule of law and human rights. It’s impossible to use one against the other.

I notice a scary trend to reduce democracy according to the “winner takes it all” rule. We see it in the US after Donald Trump’s victory, in the UK after the referendum on Brexit, when 48% for ‘Remain’ somehow disappeared. In Poland the government’s representatives tell me: “We have won the elections so we can dictate how the judiciary looks like”. But it is not so in the states that respect the rule of law.

The aim of the European Commission is guaranteeing that EU treaties are respected. In Munich, I read the Article 2 to the Polish Foreign Minister Witold Waszczykowski. It speaks of the necessity to respect the rule of law. In every EU country the rule of law is understood as respect towards the independent judiciary, irrespective of whom has won the elections and by what majority. That’s why it was so important that also member states expressed their opinion.

European leaders somehow don’t burn with desire to hold this dialogue. Criticism towards Poland is limited to a few sentences from some press conference.

During the General Affairs Council meeting a decisive majority of member states supported our approach. I think the time has come to speak out clearly that it’s not about a duel between Frans Timmermans against Poland – as the Polish government presents it. The Commission demands the rule of law with a full support of the European Parliament and the majority of member states.

Maybe it would be easier to solve the problem with Poland today, if several years ago the EU didn’t turn a blind eye to Victor Orbán’s actions.

Poland and Hungary are different. Orbán and the Hungarian government have never refused a dialogue with us. A constructive dialogue, not only pointing at divergent views, is the European way of solving such disputes. But the truth is that a few times we have opened procedures against Hungarian handling of the law. And this has stopped, for instance, decrease of the pension age for the judges [by this means Orbán tried to eliminate established judges and introduce his own].

Were you relieved after Emmanuel Macron’s victory in France?

Oh yes. And not only because of Marine Le Pen’s defeat. With her views, with her suspicious outlook at neighbours, and yearning for confrontation she would never be useful to anyone in the EU. And definitely she wouldn’t be useful to her own country.

There’s one more good information. France has now a politician that dared to defend the EU and wasn’t punished by voters in return. To the contrary, he won their votes.

But what is also important is that the electoral result doesn’t solve the situation where a significant part of society supports a nationalistic and isolationist programme. We observe this phenomenon in many countries. And until we come up with a better offer for these voters, radical nationalism will continue to seduce them. 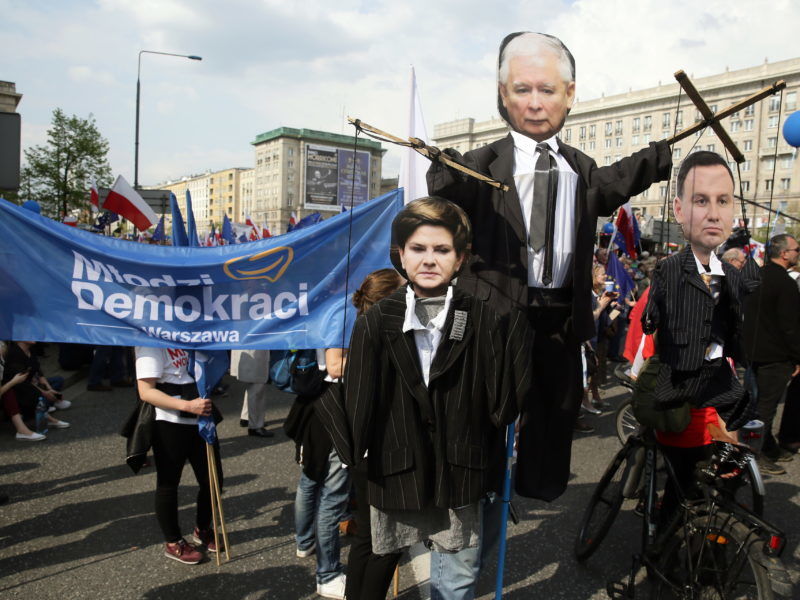 Tens of thousands demonstrated in Warsaw against Poland's government on Saturday (6 May), saying the rule of law was at stake after a slew of controversial reforms and appointments to public broadcasters.

4 responses to “Timmermans: ‘Poland should be a leader in Europe – but it needs to cooperate’”