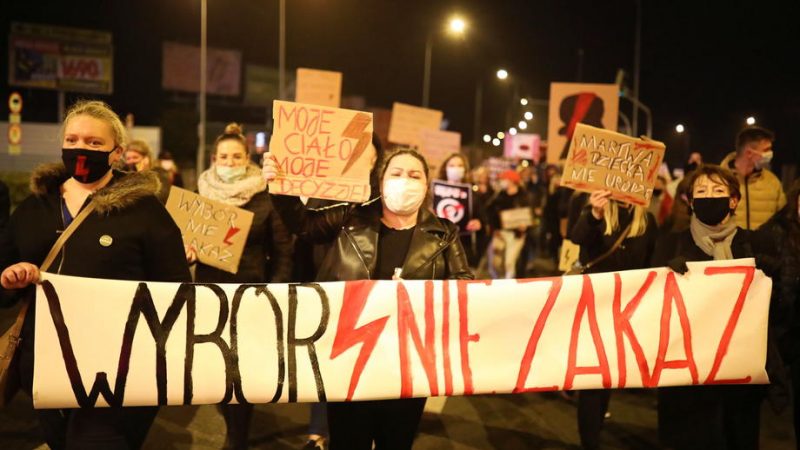 Protesters block the streets during a protest against the tightening of the abortion law in Plock, Poland, 26 October 2020. Tens of thousands of protesters across the country took to the streets on 26 October. [EPA-EFE/SZYMON LABINSKI]

The Polish government’s plan to further restrict access to abortion was the final straw that came on top of many other attempts to stifle civil liberties, Klementyna Suchanow told EURACTIV.pl after huge mass protests were organised across the country in mid-October.

The entire world sees thousands of Poles protesting against further restrictions of Poland’s abortion law. What are the major changes you hope to see?

We hope, first of all, for the government to resign. That’s what people demand. It looks like people just want to have a change. The protests are about a lot of issues right now. The matter of abortion was an incentive, the last straw, but right now the demonstrations touch upon many different issues.

They’re about artists, about the health care system, and many other issues, like the smear campaign against the LGBT community, the education system, and, of course, women’s rights. That’s why the protests have become so huge.

Are you worried that the initial focus on access to abortion is being overpowered and replaced with more general, anti-governmental slogans?

No, we don’t worry about that. We’re the Women’s Strike so we’ll always take care of women’s rights and defend them. We just take more responsibility for ourselves. This is because we see that people don’t have any platform to convey their demands. They saw the Women’s Strike as a powerful movement, around whom they can gather. This, of course, does not mean that we forgot about our own issues to fight for. There’s no way that we could forget about it. Without full respect and attention to women’s rights, nothing’s possible in Poland.

The problem is that other parties, even those who claim themselves to be liberal, are not always fully convinced about the role of women’s rights for society. Saying this, I have to admit that even if it took some time for many of them to understand our problems, we’ve seen a lot of progress on this matter since 2016.

This is also the result of the pressure we exerted on the opposition parties. In the last presidential election, the opposition Civic Platform candidate Rafał Trzaskowski put women’s rights at the top of his election program. It all shows that the issue of women’s rights and their significance for society becomes is better understood in those circles. However, there’s always room for more progress and we’ll be working on that. So we are not a movement that exerts pressure only on the ruling party, but on other parties as well.

There are voices claiming that the use of vulgar banners and chants, as well as attacking the Catholic church, has a counterproductive effect on this movement, and that storming churches offends the religious feelings of many Poles. How do you comment on that?

I’m quite tired of hearing those comments. If you have a problem, go to the street and try to convince people to use another language. If they’re upset, they’re upset. I’m a linguist, I’m working with language.

Therefore, I knew how powerful the channel of communication language is. And language is not only about providing information and transferring information, but it’s also about our emotions. You use different language when you’re in love and use different language when you’re enraged. That’s pretty simple. Language allows various forms of expression. When it comes to the protests, I would rather reverse the question and say: listen, instead of focusing on the language that people use, try to pay more attention to their emotions, ok? Because this is what matters here.

The times of being nice and politically correct are over and that’s one of the slogans of the Women’s Strike. We decided to use blunt language to create a contrast: the contrast between the lies repeated by the government, the polite words that cover bad intentions, and the expressive language heard in the streets. We chose this method of the fight also because the war itself also concerns the language.

How would the protests be conducted in case the Polish government imposed further restrictions due to COVID-19 pandemic?

The protests started in the time of the pandemic, which means that we have to count on more restrictions – that’s ok. But it doesn’t look like people want to resign from their freedom of expression. If they accept the risk, that shows quite a lot about their commitment to human rights, I’d say. Of course, health is and should be of great importance to people, but we see that some values are even more important.

Poland is one of the examples, Belarus is another one. However, it’s not the only matter of geographical location, because there is a lot of protest in many different places in the world, in the United States, for instance. The demonstrations are organised also in places where COVID-19 caused a lot more deaths than in Poland. As we see, the will of people to protest is very strong. There’s no way to deter people from expressing their views. Even the lockdown, the pandemic, the risk of infection cannot discourage them.

How can the European community support Polish people in fighting back for the women’s freedom of choice and against one of the strictest abortion laws in the EU?

First of all, I would like Europeans to understand that what’s happening in Poland affects all of us and it’s not that the Polish people are bad, so we are susceptible to bad examples and a bad government. We just live in the era of disinformation, which is spread everywhere. Currently, the Polish government’s actions actually lead us towards a withdrawal from the EU.

But that’s certainly not in line with the people’s will. According to the research, the majority, over 80% of the Polish population, supports Poland’s membership in the EU. As the citizens of the European Union, by our fighting and protesting against the unfair treatment we also try to protect you from this virus of the half-authoritarian style of governance before it spreads to the other EU countries.

I urge you not to close your eyes to what’s happening, and please don’t blame us for that all and don’t say that we are not EU citizens or we don’t deserve to be them. We do and we fight also for you and your rights.