A hotspot in Lesbos. [European Commission]

The agreement reached in March was designed to reduce the number of migrants crossing into Europe from Turkey, after more than a million people arrived in Europe last year, most reaching Greek islands by boat and continuing by land to Germany.

Under the deal, the European Union declared Turkey “a safe third country”, meaning those who make the crossing can be returned there, even if found to have fled Syria or other countries as refugees deserving protection.

Turkey agreed to take them back, in return for a range of EU concessions.

Flimsy boats packed with refugees continued to land in Greece from Turkey yesterday (20 March), despite the start of a landmark deal between the European Union and Ankara to stem the massive influx.

At around the same time, Balkan countries along the land route north closed their borders, so that migrants who once poured across Greece to reach other parts of Europe are now trapped there and prevented from pressing on. 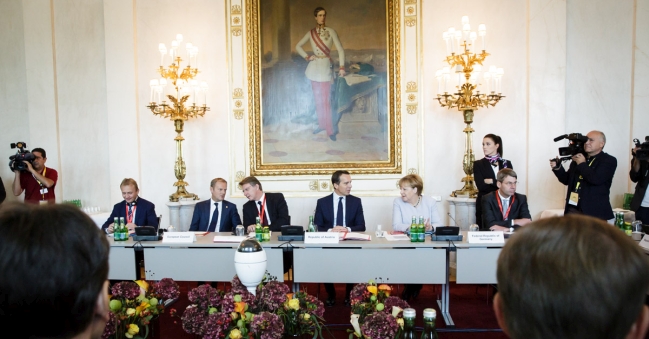 European countries on the route used by more than a million migrants to reach the continent last year agreed on Saturday (24 September) to focus on the more easily achievable ways of preventing another influx than the big issues the EU is divided over, Austria said.

For the most part, the goal of stemming the tide has been achieved so far. Only 17,000 people, around half of them Syrians, have made the hazardous sea crossing from Turkey since the deal was signed, a tiny fraction of hundreds of thousands that arrived the previous year to pass through Greece.

But for the deal to continue to work for the longer term, European officials and experts say refugees will have to be sent back to Turkey. As long as those crossing are still able to stay in Greece, there is a risk that more will decide to come.

“There’s the deterrence effect. If it’s proven that people are being turned back, it can force people to think twice about even trying,” said James Ker-Lindsay, an expert on southern Europe at the London School of Economics.

Only about 700 people who arrived since the deal was signed – just 4% of the total – have gone back to Turkey, and none was ordered back after being recognised as a refugee.

Of those who returned, most were economic migrants from countries like Pakistan and Bangladesh who left without seeking asylum in Greece. Around 70 people who did claim asylum in Greece gave up on the process and asked to leave before it was over. The rest are still in Greece, prey for smugglers who offer to take them to northern Europe.

Some 61,000 migrants are still scattered across Greece, including 15,900 in overcrowded island camps that have grown violent as the delays mount, with around 2,500 more arriving each month. The camps are now holding three times as many people as they held when the deal was signed, and twice as many as they were built for.

The EU blames the delays on Greek inefficiency.

“The goal of ensuring returns … has mostly been hampered by the slow pace of processing of asylum applications at first instance by the Greek Asylum Service and of processing of appeals by the newly-established Greek Appeals Authority,” the EU Commission said in a progress report.

“Further efforts are urgently needed by the Greek administration to build a substantially increased and sustained capacity to return arriving migrants, which is considered to be the key deterrent factor for irregular migrants and smugglers.”

Athens says it is simply overwhelmed and cannot speed up the painstaking process of evaluating claims. It has asked the EU to send more staff, but European officials say that would not help without more effort from Greece to improve its system.

Interviews with asylum-seekers and officials involved in the process suggest Greek staff are indeed stretched, but red tape, inefficiency, the lack of a unified plan across refugee camps and a lengthy appeals process are also to blame.

Amir, Walaa and their two young children fled from the Syrian city of Homs to Turkey and reached a beach on the Greek island of Chios in March. They say they came ashore the day before the deal with Turkey, but their arrival was not recorded by police until the next day, exposing them to the new rules.

“We were unlucky,” Walaa said, smiling weakly. Her two brothers had taken just two weeks to reach Germany from Greece before the land border was shut. Her husband Amir added: “We were in the boat and (German Chancellor Angela) Merkel and Turkey were finishing the deal.”

Their asylum case should be easier to process than many: they have their passports and do not need to prove their identity. But they are still months from an answer.

In their first weeks in Greece they were given a number: 10,624. Each day, they rose from their tent in the dusty remains of a castle moat, and walked to a notice board, looking anxiously for it.

If posted, it meant they should walk or catch a bus to the island’s main camp, a few miles (km) away, and queue there at the processing centre, a few prefabricated containers arranged inside an abandoned aluminium factory.

They spent four months in the tent before their number finally was posted the first time, summoning them to a meeting to establish their identity, where authorities finally sat them down to ask for their names and fingerprints.

Six months after they arrived, they were finally told the date of their first actual interview: 6 December. They were finally given the right to leave the camp and relocate to Athens while they wait for their case to be heard. Now they live at a grimy, abandoned Athens school where smugglers roam, offering passage to northern Europe for $1,000.

“We wait. Every day we just wait. Why, I don’t know,” Walaa said, gazing at the floor. She and her husband asked that their surnames not be published to protect relatives back in Syria.

Humanitarian groups on the ground say poor coordination slows things down on the islands, a conclusion backed up by the EU Commission report, which urged Greece to develop unified management for the camps.

The camps are typically run by local municipalities or the central government, while screening and interviews are carried out primarily by officials from EU border agency Frontex and the European Asylum Support Office (EASO).

Asylum-seekers say they receive contradictory information and are confounded by a lack of interpreters. One camp used a loud-hailer to call people to appointments; if they didn’t hear it, they missed their turn.

Frontex and EASO officials go to unusual lengths to confirm an identity or check an asylum seeker’s story. Someone who has no documentation and professes to be from Syria, for example, will be asked to name streets, identify landmarks or pick out Syrian coins from a handful of different currencies.

The long waits and squalor of some camps have turned frustration into violence. On Chios and the island of Lesbos in recent days, asylum-seekers attacked EASO’s offices to protest against delays. Interviews there have yet to resume. 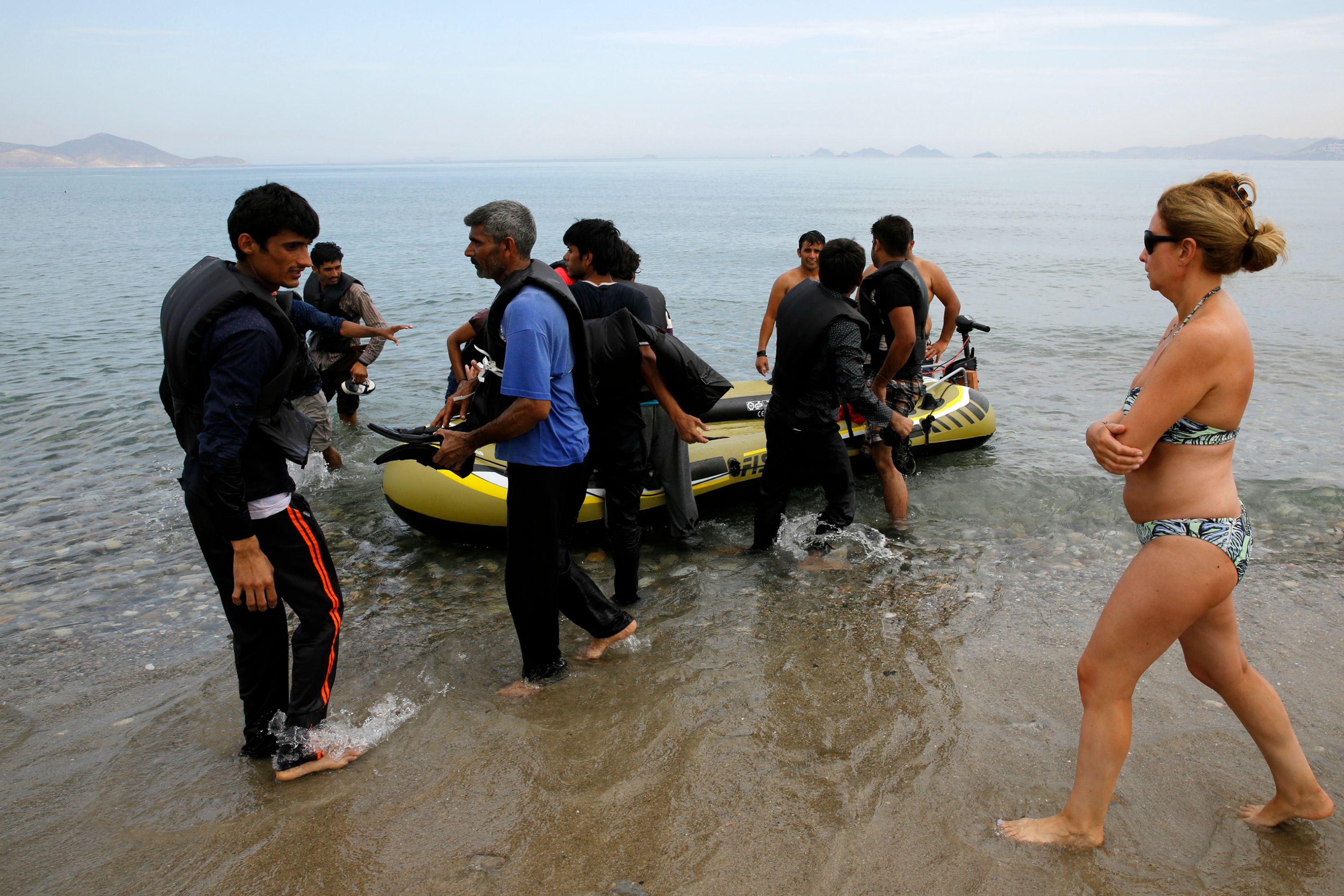 EASO has deployed 202 staff in Greece and has called for 100 more, but EU member states have yet to respond, EASO spokesman Jean-Pierre Schembri said. Greece has repeatedly asked for more.

The Greek legal system allows for an elaborate appeals process, which the EU says is too slow. Greece responded in June by sending more judges to replace civil servants and staff of either the UN refugee agency or Greek human rights commission, who had previously sat on appeals panels.

The new boards appear to be moving only slightly faster: they made 35 decisions in their first month, compared with 72 made by the old boards in the first three months of the deal, the EU Commission report said. The report did not specify what decisions had been reached.

The most contentious part of the process is determining whether those with valid asylum cases can safely be returned to Turkey, the heart of the March deal. The new appeals boards have dealt with at least three such cases as of 18 September, and at least one is challenging the decision at Greece’s highest court, according to the EU report.

Reuters could not find a board member willing to comment publicly on the process.

“A wrong decision might send someone back to serious harm,” said Giorgos Kosmopoulos, an Amnesty International researcher and former Greece director. “It’s about quality not quantity.”