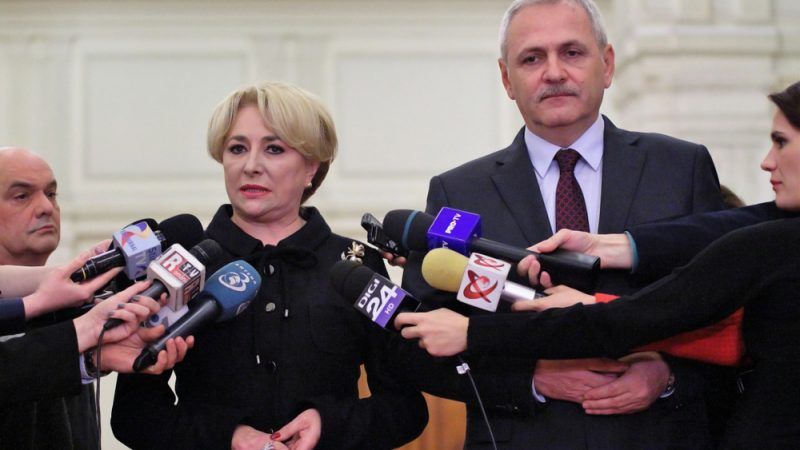 Romania’s PSD is the biggest group in the S&D and has caused a headache to S&D leader Udo Bullmann. [Shutterstock]

Sources close to the issue told EURACTIV that some MEPs had made a lot of references to the situation in Hungary and Orbán’s party and even shouted, during an intense discussion, urging the Romanian PM to stick to the “progressive” line of the socialist group.

The S&D group held a meeting on Wednesday (26 September) to discuss the rule of law in Bucharest, with the participation of Romania’s socialist Prime Minister Dăncilă.

The S&D lawmakers emphasised that Romania will hold the EU Presidency ahead of the EU election and asked the country’s authorities to provide “clarity” about a number of issues, ranging from several major corruption cases to the upcoming referendum on same-sex marriage.

Romania has attempted to change the country’s anti-corruption laws and provide a shield for politicians, triggering strong reactions and protests across the country.

An MEP listed a series of alleged corruption cases in the country and asked Dăncilă if she was “happy” with these developments.

“Is this the stance of a left party?” the MEP asked Dăncilă.

“It’s easy to say that the centre-right European People’ Party is playing a game, but I think it’s much more than that,” another MEP added.

The referendum will take place in Romania on 6 and 7 October on the article 48 of the Romanian Constitution, which is about marriage.

The question asked is whether to change the definition of the family and constitutionally prohibit same-sex marriage.

“In defence of the so-called traditional family but in opposition to the European standards that you have endorsed and ratified, the article 9 of the EU human rights chapter explicitly says that people have the right to marry without discrimination on the basis of sexual orientation”, an EU lawmaker noted.

“Prohibiting same-sex marriage in the Romanian constitution is absolutely out of line for a party that belongs to our family. We have to have in mind that many LGBT organisations rely on us and see us as their defenders in the EU sphere.”

“We would like to see the Romanian socialist party standing against that constitutional change to ban same-sex marriage,” the MEP emphasised.

Dăncilă noted she had not campaigned in favour of the referendum but S&D sources told EURACTIV that “back in Romania she is doing exactly the opposite.”

Some MEPs also raised the issue of the government’s intention to move its embassy in Israel to Jerusalem, which contradicts the official EU line.

The issue is now frozen as President Klaus Iohannis, who must give the final green light, opposes such a move.

An MEP asked Dăncilă to clarify the relations of Liviu Dragnea, the leader of Romania’s ruling Social Democratic Party, with advisors of Israel’s Netanyahu and Hungary’s Orbán administrations.

Dragnea recently came under fire as he was found guilty of abuse of office. In the past, he also received a two-year suspended sentence.

Romania’s PSD is the biggest group in the S&D and has caused a headache for S&D leader Udo Bullmann.

The German politician has pledged to adopt a more progressive agenda ahead of the European elections but the Romanian member is threatening to derail his plans. In addition, the Romanian government’s actions against NGOs are not in line with S&D’s fresh push for a bottom-up approach and more engagement from the civil society.

Following a strong push by the socialists, the European Parliament recently voted to trigger Article 7 proceedings against Hungary in light of alleged rule of law violations there.

Next week, the EU plenary will discuss the issue of Romania.

The Venice Commission, an advisory body of the Council of Europe for constitutional law, will also soon review the situation with the anti-corruption laws in Romania. If they find a violation, the socialist group will support a EuropeanParliament resolution about a possible activation of Article 7 against Bucharest, EURACTIV has been informed.