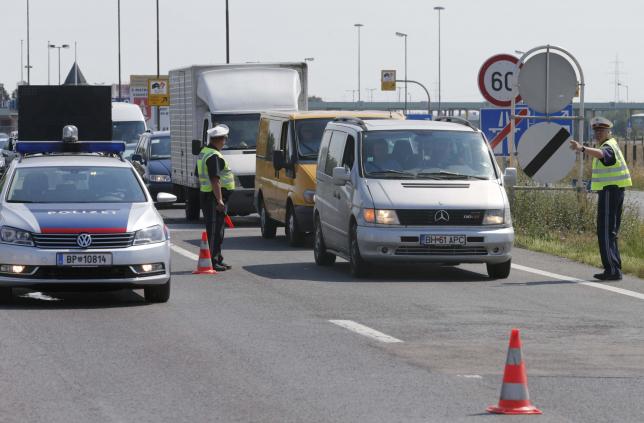 At a news conference in Vienna, Interior Minister Johanna Mikl-Leitner and one of her top deputies rejected suggestions that the border checks, which triggered a 25-km (15-mile) queue of vehicles stretching into Hungary, constituted a violation of Europe’s passport-free Schengen zone. Hungary has been a member of Schengen since December 2007.

Konrad Kogler, General Director for Public Security at the ministry, told reporters the checks had been agreed with Germany, Hungary and Slovakia, and had already uncovered more than 200 refugees and five people smugglers.

“These are not border controls,” said Kogler, noting that checks were taking place across Austria’s territory as well. “It is about ensuring that people are safe, that they are not dying, on the one hand, and about traffic security, on the other.”

>>Read: Up to 50 migrants found dead in truck in Austria

Hundreds of thousands of migrants are trying to reach the European Union, fleeing violence and poverty in the Middle East and Africa. More than 140,000 have been caught by Hungarian police on the Serbian border so far this year. The overwhelming majority head on to richer western Europe, many to Germany.

Hungary’s M1 motorway leading to Austria, which also borders Slovakia, Slovenia and the Czech Republic on its eastern side, clogged up due to the checks. The firm that maintains the road said the controls had started on Sunday.

Over the past three days, Hungarian police said they had caught 8,792 migrants crossing into the country, most of them from Serbia.

The police said on Sunday (30 August) they had arrested a fifth suspect in connection with the deaths of the migrants found in the abandoned refrigeration truck in Austria.

The clampdown on trafficking at the Austrian border is likely to mean that migrants get stuck in Hungary, as without a valid visa and travel documents they cannot use trains or regular buses.

In front of Budapest’s Eastern Railway station, over 1,000 migrants, families with babies and children, were waiting on Monday in the summer heat, lying on blankets on the floor.

Late on Sunday, dozens of migrants protested, demanding that authorities let them get on trains to Austria.

Later this week, Hungary’s government plans to tighten laws on migration and also plans to set up holding camps near the Serbian border.

The government said it may use the army to help police protect the borders if it gets the necessary parliamentary approval.

The changes will also involve stronger penalties for the illegal crossing of borders and for damaging a 175-km fence being built at the Serbian border, and would enable Hungary to expel migrants violating the new rules.