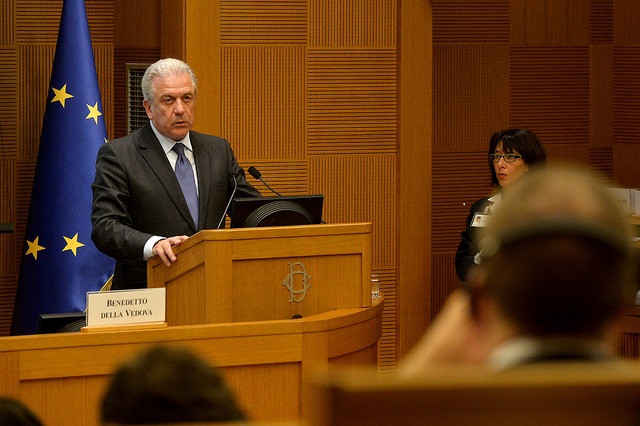 Despite the introduction of the Common European Asylum System (CEAS) at the start of this year, EU member states still do not have common standards with regard to refugee policy. Conditions in refugee camps in southern Europe are still disastrous, and Italy allows refugees to travel on through its northern borders without applying for asylum.

But Dimitris Avramopoulos, the EU’s new Commissioner for Migration, Home Affairs, and Citizenship, hopes to put an end to these issues.

“The Commission is determined to adopt a more enhanced and cohesive asylum policy than ever before,” the Greek politician said on Tuesday at the end of his meeting with Germany’s Internal Affairs Minister Thomas de Maizière, in Berlin.

All member states – even states at the EU’s external borders – must “fulfill their legal obligations”, the Commissioner emphasised. “Responsibility and solidarity go hand in hand.”

Avramopolous focused specifically on Italy. For several months, the country on the Mediterranean has taken criticism from other member states, particularly Germany, for allowing refugees to pass through without applying for asylum – a violation of the Dublin III Regulation.

According to EU law, the country in which a refugee first touches EU soil is required to accept the person and process their application for asylum.

“We have a common asylum system but it does not work. All EU states should fully comply with the requirements they committed to – this includes registering refugees,” de Maizière contended.

Avramopoulos and de Maizière both hope to reach a fairer distribution of refugees in the future. On Tuesday, they agreed that a quota system would be the best way to achieve this.

The call for a more just distribution is part of a package of measures agreed in October by EU countries, on the basis of which the Commission hopes to submit a legislative proposal.

The proposal is planned to include a concrete method and relevant criteria for a quota system, Avramopoulos explained.

Current statistics indicated that five countries – Sweden, Germany, Italy, the United Kingdom and France – take in 75% of all refugees in the EU. As of 2014, Germany is at the top of the list.

Another aspect of the Commission’s proposal is likely to be a bid for refugee “welcome centres” in North African transit countries. Refugees seeking protection in Europe would be able to register in the centres without crossing EU borders. Then UNHCR and EU authorities would be able to decide whether or not to allow entry into Europe.

“Isn’t it more humane to create welcome centres, particularly in transit countries, instead of watching [refugees] drown in the Mediterranean Sea? With these centres, we will create a possibility to travel to Europe legally and put a stop to trafficking,” de Maizière explained.

Thousands drown every year while attempting to reach Europe by boat. According to reports from refugee organisations more than 3,300 refugees have died in the Mediterranean this year.

The NGO Pro Asyl criticised the proposal presented by EU countries. The idea is nebulous and highly questionable, said the organisation’s director Günter Burkhardt on Tuesday in Berlin, saying it will not put an end to deaths in the Mediterranean.

Reception centres will also not prevent refugees from making their way to Europe, Burkhardt argued.

Further, the Pro Asyl director said North Africa lacks a constitutional guarantee for the processing of asylum applications. Most likely, Burkhardt said, the EU is attempting to absolve itself of responsibility by outsourcing the procedure.

“These are placebo and alibi considerations,” Burkhardt said. “The fortress Europe is still being diligently constructed.”