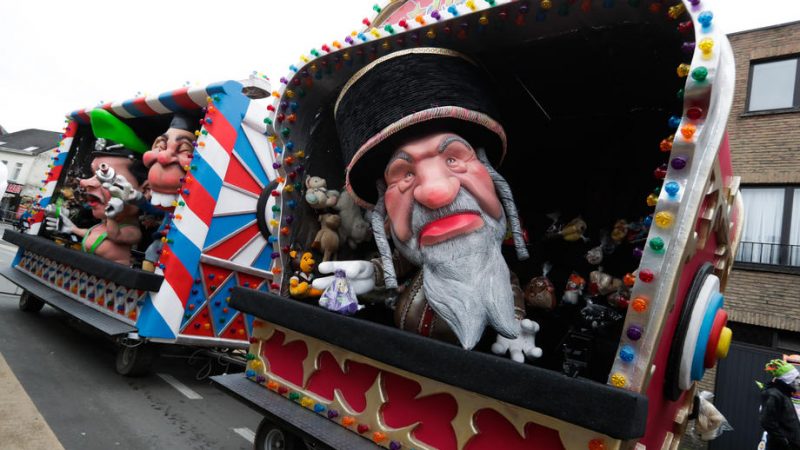 Belgian PM Sophie Wilmès responded on the accusations on Sunday, saying the government "is sensitive to the reactions to certain floats and carnival costumes" at the Aalst Carnival edition. [EPA/STEPHANIE LECOCQ]

A year after sparking controversy and a wave of international protests over anti-Semitism, the Aalst Carnival organisers brought back anti-Semitic caricatures to the annual parade. For the first time, Belgium’s prime minister stepped into the debate and asked legal institutions to determine if the laws had been broken.

Only last week, Israel’s foreign minister Israel Katz urged Belgium “to condemn and prohibit” the Aalst carnival for what he called a “vitriolic anti-Semitic display” and “a hateful parade”,

The American Jewish Committee asked the European Union to investigate the Aalst Carnival.

In 2019, UNESCO withdrew its recognition of the Aalst Carnival as a cultural world heritage event following the depiction of ultra-Orthodox Jews standing with bags of money.

This year’s procession included costumes of Jews with ant features and legs, accompanied by a label called “complain ant,” a phrase that in Dutch resembles the word for the Western Wall, the Jewish place of prayer in Jerusalem.

Besides the floats, the participants massed along the road also decided to laugh at the controversy, with many of them displaying stereotypes of the Jewish religion such as hooked noses and curly locks.

Belgian PM Sophie Wilmès responded to the accusations on Sunday, saying the government “is sensitive to the reactions to certain floats and carnival costumes” at the Aalst Carnival edition.

“It is not the first time these practices have been criticised mainly because of the caricatures of the Jewish community,” she said in a press release.

Wilmes called the representations of the Jewish community at the Aalst carnival “prejudicial to our values ​​as well as to the reputation of our country”.

Belgium is a democracy “based on fundamental freedoms which include freedom of expression”, Wilmès said. “This value implies, in particular, the freedom to criticise, to blaspheme, to caricature.”

However, “this freedom evolves within a precise legal framework which aims to protect individuals from racism, anti-Semitism and other discrimination”, Wilmes said.

“It is therefore up to the competent institutions and to the courts to determine whether the events which took place during the carnival break the law,” she added.

According to Belgian press reports, Wilmès is of Jewish descent herself and the daughter of a Jewish mother who has lost several relatives in the Holocaust.

At a press conference during the weekend, Aalst Mayor Christoph D’Haese defended the display as a mere expression of “the irreverent spirit” of Aalst.

Responding to Wilmes’ comments, he called her statement “bizarre” and invited her to view next year’s parade so “she can form her opinion based on facts.”

“The Aalst Carnival must stay the Aalst Carnaval and laugh with everything and everyone. You don’t always get that explained abroad, but this is not an anti-Semitic manifestation. Censorship is not appropriate here,” Minister-President of Flanders, Jan Jambon (N-VA), told vtm nieuws.