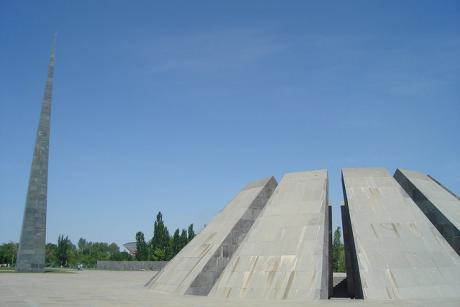 On Friday (24 April), a ceremony to remember the victims is expected to take place at the memorial on the Tsitsernakaberd hill in Yerevan. [Stefan Krasowski/Flickr]

Berlin has long resisted using the term “genocide” to describe the massacre of 1 million Armenians in 1915 but now the Chancellor and her coalition government have given in to pressure from Bundestag MPs in their own ranks. EURACTIV Germany reports.

On Monday (20 April), Chancellor Angela Merkel’s spokesman Steffen Seibert said the government would support a resolution intended to commemorate the mass slaughter of Armenians 100 years ago.

The Bundestag’s ruling coalition parties set the draft in motion, and have put much pressure on their colleagues in the government to accept the term “genocide” to describe the incidents.

A debate over the resolution is scheduled to take place in the Bundestag on Friday (24 April).

“The government backs the draft resolution […] in which the fate of the Armenians during World War One serves as an example of the history of mass murders, ethnic cleansings, expulsions and, yes, the genocides during the 20th century,” Seibert said.

Up until recently, the coalition government had avoided the word “genocide”.

Amid warnings from Turkey, Foreign Minister Frank-Walter Steinmeier skirted the term in a television interview on Sunday (19 April) but rejected any suggestion it was being avoided to avoid upsetting Turkey.

“Responsibility cannot be reduced to a single term,” he said, when asked whether the massacres should be considered genocide.

But Turkish President Recep Tayyip Erdo?an has repeatedly condemned labelling the massacres as such.

“We will not allow historical incidents to be torn out of their context and used as a tool for campaigns against our country,” he said last Tuesday, reacting to a speech by Pope Francis.

“I condemn the Pope and would like to warn him not to make similar mistakes again,” the President emphasised.

Last week, the Pope referred to the events as “the first genocide of the 20th century”.

But Turkey denies that the killings, at a time when Turkish troops were fighting Russian forces, constituted genocide.

The country admits that Armenian Christians were killed during the massacres and deportations of 1915 and 1916, but not hundreds of thousands.

It argues there was no organised campaign to wipe out Armenians and no evidence of any such orders from the Ottoman authorities.

The Bundestag is expected to pass the resolution on Friday in a move meant to commemorate the massacre of up to 1.5 million Armenians by Ottoman Turkish forces.

Still, Seibert emphasised that the draft resolution indicates Germany is “aware of the uniqueness of the Holocaust, for which Germany bears the guilt and responsibility”.

Meanwhile in a resolution on Wednesday (15 April), the European Parliament paid tribute to the 1.5 million victims of the Armenian Genocide of 1915 and called on Turkey to join in recognising the atrocities as a genocide.

MEPs invited Armenia and Turkey to “use examples of successful reconciliation between European nations” by ratifying and implementing, without preconditions, the protocols on the establishment of diplomatic relations, opening the border and actively improving their relations, with particular reference to cross-border cooperation and economic integration.