Bild: Germany now expects up to 1.5 mlllion migrants in 2015 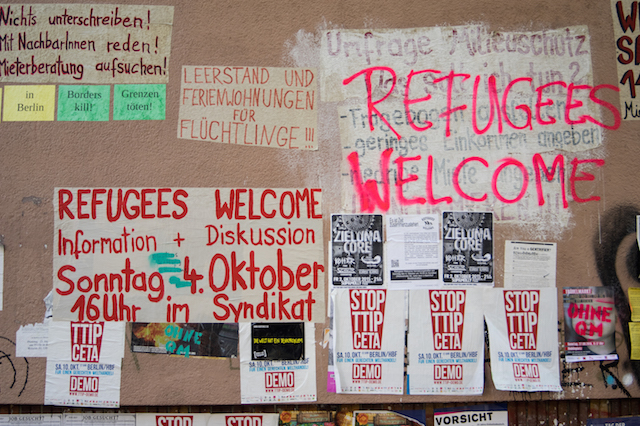 Despite right-wing criticism, nearly half of Germans surveyed support the settlement of refugees in the country. Berlin, 4 October. [Joel Schalit/Flickr]

German authorities expect up to 1.5 million asylum seekers to arrive in Germany this year, Bild said in a report to be published on Monday (5 October), up from a previous estimate of 800,000 to 1 million.

Germany’s top-selling newspaper cited an internal forecast from authorities that it said had been classed as confidential.

Many of the hundreds of thousands of people pouring into Europe to escape conflicts and poverty in the Middle East, Africa and beyond have said they are heading to Germany, Europe’s largest economy.

Bild said that the German authorities were concerned about the risk of a “breakdown of provisions” and that they were already struggling to procure enough living containers and sanitary facilities for the new arrivals.

“This high number of asylum seekers runs the risk of becoming an extreme burden for the states and municipalities,” the report said.

The authorities’ report also cited concerns that those who are granted asylum will bring their families over to Germany too, Bild said.

Given family structures in the Middle East, this would mean each individual from that region who is granted asylum bringing an average of four to eight family members over to Germany in due course, Bild quoted the report as saying.

German Finance Minister Wolfgang Schaeuble said on Sunday Europe needs to restrict the number of people coming to the continent.

>>Read: German president warns of limits to number of refugees

Chancellor Angela Merkel, who said Germany would grant asylum to those fleeing Syria’s civil war, has recently seen her popularity ratings slump to a four-year low.