In an interview with AFP, the centre-right Bulgarian premier said that poorer EU countries that depend on aid from Brussels should return the favour by helping to ease the migrant burden on western European countries.

“When taxpayers (in richer European countries) give money for European solidarity, we are happy. When, however, they have a problem — because the migrant flow is mainly headed there — then, in my view, we also have to show solidarity and mutual aid,” Borissov said.

Bulgaria stood apart from the group of ex-Communist countries this week in confirming that it would accept its quota of 1,200 refugees.

So far, however, only two Iraqi refugees have agreed to be relocated to Bulgaria from other EU countries, one of whom has already slipped out of the country.

“The migrants do not want to stay in Bulgaria. They want Sweden, Luxembourg, Switzerland. Do we need to build a prison to keep them here by force?” Borissov added.

The prime minister, a former bodyguard, expressed scepticism about a proposed EU “solidarity contribution”, or fine, of €250,000 per refugee that member states decline to take in.

“It is high time that European Union members find mechanisms that work in practice instead of just condemning each other with statements along the lines of ‘whoever does not accept relocation will be fined’,” the sharp-tongued Borissov said.

Too proud to plead

Bulgaria had been bracing for an influx of refugees across its borders with Greece and Turkey after the western Balkans route was sealed off earlier this year.

But so far, Borissov said, there had not been any increased pressure along the 259-kilometre (160-mile) border with Turkey or the 493-kilometre frontier with Schengen member Greece, to the south.

The Balkan country has put up a three-metre-high fence along 95 kilometres of its porous border with Turkey. The fence will eventually stretch to 132.5 kilometres. Around 2,000 border police, gendarmes and soldiers have been deployed to patrol the rest of the border.

“Bulgaria has taken tough measures to guarantee the security not only of its people but of the European Union,” Borissov said.

Taking aim at Greece, he said his cabinet had received migration aid of “a mere 6 million euros from the European Union compared to €700 million for our neighbours Greece”.

Bulgarian Prime Minister Boyko Borissov said today (25 March) the main threat of a migrant wave for his country came from EU-member Greece, not from Macedonia – an EU-candidate county who he said was behaving responsively and effectively in dealing with the challenge.

“Bulgaria has proved that it is was doing much better in safeguarding the Schengen area than the Schengen member states themselves”.

Bulgaria and its northern neighbour Romania, who joined the EU in 2007, had been refused entry into the passport-free Schengen zone following objections from a number of EU members led by the Netherlands.

“It was insulting,” Borissov said, adding that Sofia had no intention of asking for a re-think on the matter.

“We are a proud nation and to plead with a country to see the obvious just won’t happen,” he said. 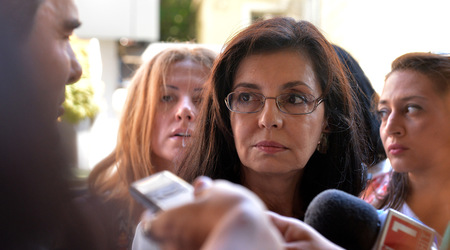 Bulgaria cannot check if incoming refugees are registered as criminals or terrorists in the Schengen Information System. This puts the EU in danger, because it is blocked from joining the borderless space, said Deputy Prime Minister Meglena Kuneva.

For several years now, Bulgaria and Romania have been considered fit to enter Schengen by the European Commission, which is the only EU body qualified to make a judgement.

But decision-making in this field requires consensus, and Germany in particular has reportedly been opposed to the Schengen accession of Bulgaria and Romania, who joined the EU in 2007, and who have been trying to join the zone since.

The German position with regard to Bulgaria’s Schengen accession was well illustrated by European Parliament President Martin Schulz. Schulz said that Bulgaria would defend its Turkish border regardless of whether it is a Schengen member or not.