By Georgi Gotev | EURACTIV Bulgaria and EURACTIV.com with AFP

Citizens blocked a major Sofia boulevard on 24 October 2019, in protest of the election of Ivan Geshev as Prosecutor General. [Dnevnik]

After an all-day hearing, the 25-member Supreme Judicial Council, the country’s top judicial body, voted in Ivan Geshev for a seven-year term, with 20 votes in favour and 4 against.

The 48-year-old, who was until now deputy chief prosecutor, was the sole candidate.

President Rumen Radev has yet to sign the decree. According to the constitution, the head of state can reject the candidate only once. If the Supreme Judicial Council submits the same candidacy again, he is obliged to sign the decree.

Dnevnik, EURACTIV’s media partner in Bulgaria, writes that if the President refuses to sign Geshev’s appointment, the Supreme Judicial Council will not start a new procedure, but will re-elect Geshev.

#Bulgaria's new Prosecutor General Ivan Geshev was unique candidate for a post described by some as "the most important" in Bulgaria. Many critics point to Geshev as lacking qualities but docile enough to please powers-that-be & politicize the prosecution https://t.co/RYdyYcJ4JV

Geshev’s nomination drew recurrent protests over the past months, with thousands of people taking to the streets to express their opposition.

Last night #Sofia was out on the streets against the appointment of the sole candidate for chief prosecutor of Bulgaria. #Geshev said there’s no need for separation of the judiciary to government. #Bulgaria pic.twitter.com/FWzttecxag

The demonstrators, backed by non-governmental judiciary reform and human rights groups, questioned Geshev’s professionalism, integrity and independence from behind-the-scenes oligarchic circles that they claimed could influence his decisions as chief prosecutor.

Geshev has denied the allegations and refused to back down and withdraw.

Protesters were denied access early Thursday outside the judicial council headquarters in downtown Sofia with police cordoning off the building.

Demonstrators instead blocked a key downtown intersection for hours, carrying posters that read “Shame, mafia, choice among one?” and shouting “Mafia!” and “Geshev is disgrace.”

Groups supporting Geshev were allowed in front of the judicial council headquarters, where they staged a small rally shouting his name and holding posters saying “Geshev, the sheriff of the people” and “Geshev, the worthy chief prosecutor”.

1/3 The people on these pictures were demonstrating in Sofia today in support of Ivan Geshev, the only candidate for the position of Prosecutor General of Bulgaria. Geshev says he is against the separation of powers, which he views as an "extreme right" idea. pic.twitter.com/cOPmPVqD8z

As his predecessor Sotir Tsatsarov, Geshev is perceived as a guardian of the status quo in Bulgaria where an oligarch, Delyan Peevski, is clearly above the law, while the prosecution is particularly arduous in harassing his critics.

The chief prosecutor is one of the most powerful figures in Bulgaria. He or she oversees the work of all other prosecutors and has the final word on whether to launch or stop an investigation.

Bulgaria’s legislature cannot bring criminal charges against the chief prosecutor – an issue raised as problematic by international organisations like the European Court of Human Rights, the Council of Europe’s Venice Commission and the European Commission.

In its latest monitoring report on Bulgaria’s judiciary reforms published on Wednesday, the European Commission let the country off the hook, saying nevertheless that more work was needed to bring the country’s judiciary in line with European standards.

Sofia should live up to its pledges “to put in place procedures concerning the accountability of the prosecutor general, including safeguarding judicial independence,” the Commission notably said.

Svetoslav Terziev, a columnist with newspaper SEGA, wrote that  monitoring reports on Bulgaria have become meaningless under the Juncker Commission. According to him, this is because Juncker promised Prime Minister Boyko Borissov to put an end to this procedure during a summit of centre-right political party leaders, the European People’s Party (EPP).

Vĕra Jourová, the EU Commissioner for justice, has differed with Juncker, saying and repeating that Bulgaria has not met the conditions for the monitoring to be lifted.

Twelve years after joining the European Union in 2007, Bulgaria remains the block’s most corrupt member, according to Transparency International’s corruption perceptions index. 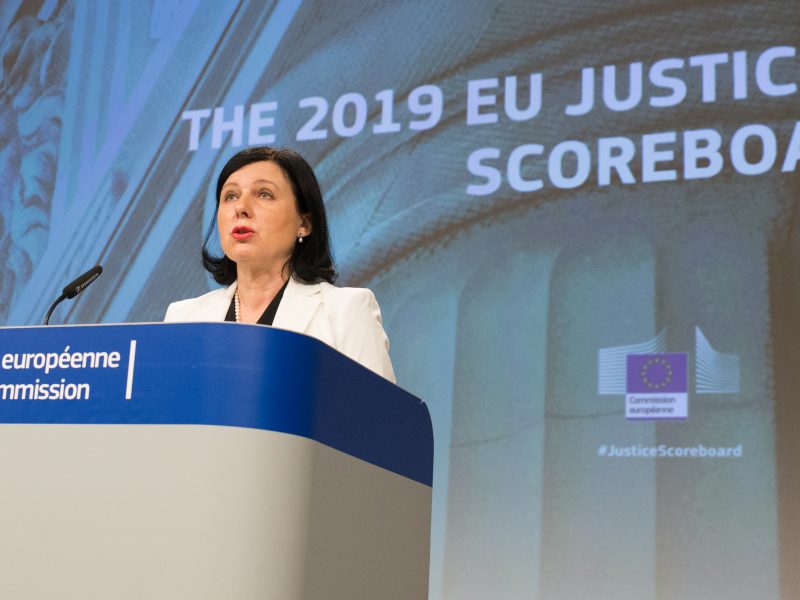