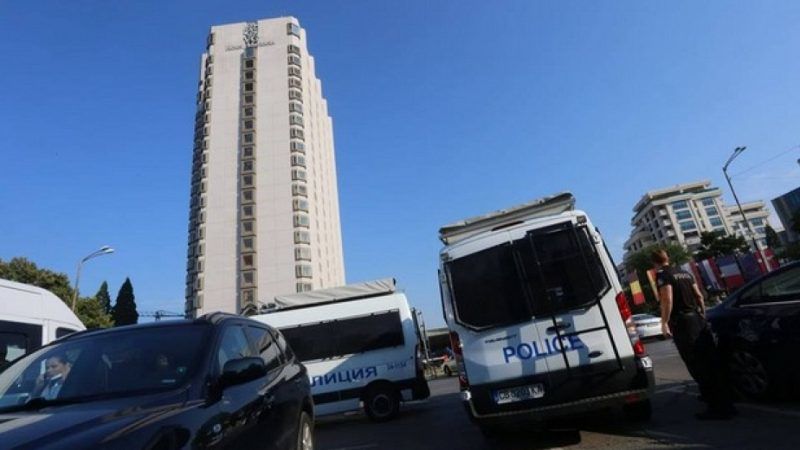 Police cars in front of Marinela hotel in Sofia. [Twitter]

The first of the buildings searched was Marinela, the flagship hotel of the Bulgarian Presidency of the Council of the EU. Its owner is Vetko Arabadjiev (born Valcho Arabadjiev), a rich businessman and owner of a touristic empire with more than 15,000 beds, known as the Victoria Group.

Huge scandal. The owners of Bulgarian EU Presidency flagship hotel Marinella are charged with money laundering and tax evasion, European arrest warrants are issued (they are in France). Millions of cash have been found by investigators pic.twitter.com/4BZT1RU1k1

Marinela has shocked many of its EU guests by the presence of scarcely dressed young women. A Bulgarian website has reported that the wife of an EU official was so disturbed by the sight of these women in Sofia that the couple were transferred to the more upmarket Hilton Hotel.

Marinela hotel in Sofia is where the official guests of the Bulgarian Presidency of the Council of the EU @EU2018BG are accommodated. This is a photo from the men's room pic.twitter.com/Xs2HUBxRWl

Vetko Arabadjiev and his wife are reportedly in France and European arrest warrants have been issued. The family possess a villa in Saint Tropez and a luxury yacht.

Ivan Gueshev, deputy chief prosecutor, said that throughout his whole career he had never seen so much cash coming out of shoe boxes and suitcases.

“To my knowledge, there has been nothing similar in the recent history of Bulgaria”, he said, adding that the investigators requested the Central Bank to provide banknote-counting machines, because in his words the manual count would take days.

“You cannot forbid anyone to be rich, but when you buy cars, aeroplanes and hotels, you should pay your taxes”, the prosecutor said.

Arabadjiev has a collection of luxury cars, including a Rolls-Royce, a Maybach and a Maclaren. He also reportedly owns two aeroplanes which he uses to lift his guests to Saint Tropez. In 2016 he invited 400 guests for his birthday party in Saint Tropez, including many models and female “folk singers”, widely perceived as expensive prostitutes.

According to investigators quoted by the website Blitz, the business empire of Arabadjiev has evaded VAT in huge amounts using four different schemes.

One of the anecdotes around Arabadjiev is that his Rolls-Royce was stolen in Saint Tropez, and then found three years later in Bulgaria. According to rumours the car was stolen by the Albanian mafia and returned after a substantial ransom was paid.