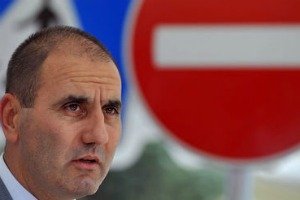 The two largest opposition parties in Bulgaria filed a no-confidence motion against the minority centre-right government yesterday (13 July), slamming the prime minister for failing to join the EU's Schengen passport-free zone and for what they described as a law enforcement fiasco. Dnevnik, EURACTIV's partner in Bulgaria, reports.

The Socialist Party and the Movement of Rights and Freedoms (MRF) filed a no-confidence motion against the government of Prime Minister Boyko Borissov on Wednesday (13 July).

All opposition forces in parliament (see 'Background') indicated that they would back the motion. The vote is due to be held next week.

According to MP Lyutfi Mestan from MRF, the call for a no confidence vote is a punishment for the government's failure in the field of home security, its missed target of joining the Schengen border-free area, and police abuse and violations of human rights.

Despite the fact that Borissov had made Schengen accession his top European priority, Bulgaria and Romania were denied entry in June. The issue is now expected to be discussed again in September.

Dutch Prime Minster Mark Rutte recently made it clear that he did not trust Romania and Bulgaria to guard the Union's common borders. The Hague, he added, would not change its position as long as the monitoring mechanism put in place to assess law enforcement in Bulgaria and Romania kept on producing reports speaking of only limited progress.

The next progress reports are due by the end of July. In an apparent move to please Brussels, two notorious 'businessmen', the Galevi brothers, last week received prison sentences of seven years each. But on the negative side, Bulgarian Interior Minister Tzvetan Tzvetanov reportedly aggravated the brewing conflict between the executive and the judiciary.

In a series of statements, Tzvetanov accused judges and lawyers of siding with the mafia, an allegation that he did not substantiate. This prompted not only politicians, but the Bulgarian Helsinki Committee, an NGO, to demand his resignation.

Tensions grew further against the background of a recent push by the government to pass a controversial law in parliament aimed at confiscating, without trial, property allegedly proceeding from unlawful activity. For the first time a law put forward by GERB did not pass through parliament, as 47 MPs from the ruling party failed to turn up for the vote, held last Friday.

For the first time since Borissov formed a minority cabinet two years ago, all opposition forces now appear ready to sanction him.

But their real target appears to be the country's Deputy Prime Minister and Interior Minister Tzvetan Tzvetanov, who is also the ruling GERB party's chief fundraiser and election organiser. Bulgaria will hold presidential elections on 23 October, and Tzvetanov is widely seen as a possible GERB candidate.

However, Tzvetanov, who is a former police chief, is criticised by his opponents for heralding abuse of police power, waging a war against the country's judiciary, and buying several apartments in a very short space of time. Tzvetanov denied alleged corruption and explained that his parent's savings had helped him acquire the apartments.

"We had discussions, we coordinate policies and will probably back the no-confidence vote, if it is focused on law enforcement policy," said Ivan Kostov, a former prime minister, now leader of Democrats for a Strong Bulgaria (DSB), a centre-right party.

Just as Martin Dimitrov, leader of the Blue Coalition, Kostov rejected accusations of cooperating with their traditional socialist foes. Both leaders said they had withdrawn their confidence in Tzvetanov last February.

GERB is still expected to win the no-confidence vote, thanks to the support of the nationalist party Ataka and the majority of 17 independent MPs. However, according to analysts, the Bulgarian opposition will make heard the message during the debate that Tzvetanov and Borissov probably aren't the best tandem to rule the country.

GERB (the acronym stands for 'Citizens for the European Development of Bulgaria') is affiliated to the European People's Party (EPP), the largest political group in the European Parliament. GERB has six MEPs out of 17 Bulgarians in Brussels.

GERB leader Boyko Borissov, who became prime minister after the 2009 election, leads a minority government tacitly supported by Ataka and to a lesser extent, by a smaller group, called the 'Blue Coalition'. The latter brings together the remnants of the once powerful anti-Communist Union of Democratic Forces (SDS) and its rival party, the Democrats for a Strong Bulgaria (DSB).utme ster k Re retaa uu

Ataka (National Union Attack), a nationalist, xenophobic and homophobic party, is represented in the Bulgarian parliament with 21 MPs.

The main opposition in Bulgaria consists of the Socialist Party (40 MPs and six MEPs) and the Movement for Rights and Freedoms (MRF), a party harbouring the country's Turkish minority, with 37 MPs and three MEPs. In the European Parliament, MRF is affiliated to the liberal ALDE group (click here for more).

Following a series of political intricacies, the Bulgarian parliament also contains 17 MPs who have become independent. Some of them have left their political groups. The former political group Order, Lawfulness and Justice, a maverick party, lost its status after a number of defections and its remaining members are now described as 'independent'.