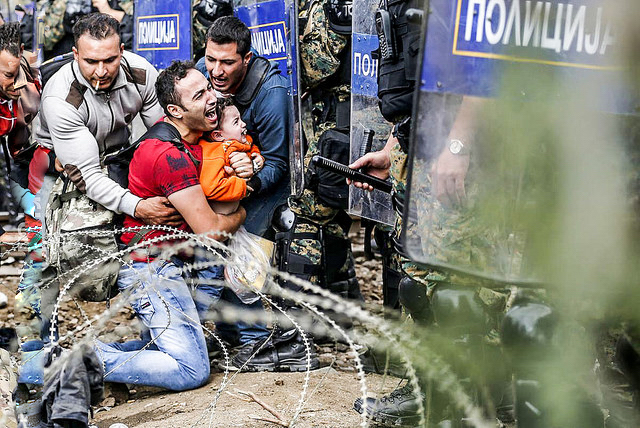 Syrian refugees clash with Greek police, as they try to cross the border into Macedonia. Idomeni, 21 August. [Freedom House/Flickr]

The European Commission said that Germany is legally justified in reimposing border controls with Austria on Sunday (13 September), stating that the move showed the need for EU states to back the executive’s proposed plans for refugees.

“The temporary reintroduction of border controls between member states is an exceptional possibility explicitly foreseen in and regulated by the Schengen Borders Code, in case of a crisis situation,” the Commission said in a statement.

“The current situation in Germany, prima facie, appears to be a situation covered by the rules.”

It added that the executive would keep the situation under review and said the aim would be to return to the normal situation of no border checks between member states of the Schengen zone “as soon as feasible”.

Germany reimposed the controls after acknowledging it could scarcely cope with thousands of asylum seekers arriving each day. Migrant arrivals have soared since German Chancellor Angela Merkel effectively opened German borders to refugees a week ago.

“The German decision of today underlines the urgency to agree on the measures proposed by the European Commission in order to manage the refugee crisis,” the Commission said.

Commission President Jean-Claude Juncker, who spoke to Merkel shortly before her government made the decision public, has been pressing reluctant eastern European governments to support Commission proposals, which Germany backs, to redistribute asylum-seekers around Europe.

Juncker also spoke to the Hungarian, Czech and Slovak leaders on Sunday, seeking to break their collective resistance to his plans before EU interior ministers debate them at an emergency meeting at 3 p.m. (1300 GMT) on Monday.

However, diplomats said talks among envoys in Brussels throughout Sunday evening had failed to break the deadlock. They will resume at 8 AM to review compromises being drafted through the night. However, division is such that decisions may be largely postponed until an 8 October ministerial meeting.

Among arguments EU and German officials have used to press eastern leaders who say their societies cannot take in large numbers of immigrants have been warnings that failure to fix a common plan on migration could wreck the Schengen open borders system which is especially valued in formerly communist states.

“The free movement of people under Schengen is a unique symbol of European integration,” the Commission statement said.

“However, the other side of the coin is a better joint management of our external borders and more solidarity in coping with the refugee crisis. This is why Monday’s extraordinary council of interior ministers is so important. We need swift progress on the Commission’s proposals now.”

Germany made clear it wanted EU partners to share the burden of welcoming thousands of refugees.

“It’s true: the European lack of action in the refugee crisis is now pushing even Germany to the limit of its ability,” Economy Minister Sigmar Gabriel, who is also vice-chancellor, told Berlin’s Der Tagesspiegel.

Diplomats said after talks in Brussels on Sunday that Hungary, Slovakia and the Czech Republic were refusing to accept the compulsory distribution of 120,000 asylum seekers – even though Hungary, which has taken in large numbers, would benefit.

An earlier plan to relocate 40,000 from Italy and Greece is expected to be given a legal green light by ministers, partly because it is voluntary – a result of EU leaders blocking a Juncker proposal for mandatory quotas in June. Ministers may also toughen Commission language on deporting illegal migrants.

Central European countries are hostile to Commission plans for spreading refugees around the bloc, and reject any suggestion of compulsory quotas.

“We are helping, we are ready to help, but on a voluntary basis,” Czech Prime Minister Bohuslav Sobotka said on Sunday. “The quotas won’t work.”

In neighbouring Slovakia, Interior Minister Robert Kalinak said he would try to block quotas. “They don’t make any sense … and don’t solve the crisis in any way,” he said in a TV interview.

Poland said it might accept more migrants, but only if the EU secures its external borders; separates those who need help from economic migrants; and allows Warsaw a say in screening them from the point of security.