The European Union’s executive proposed on Tuesday (29 May) to spend more of the bloc’s money on Italy and other southern states hit by the economic and migration crises, while giving less to the Visegrad Four countries.

The proposal on the 2021-2027 budget, which details plans announced a month ago, comes as Italy faces snap elections, which polls show could further strengthen eurosceptic parties.

The budget, the first since Britain voted to leave the EU, would increase to 1.1 trillion euros ($1.2 trillion) from 1 trillion euros in the current seven-year period. A third of spending would be allocated to the “cohesion policy”, which helps reduce the gap between rich and poor regions of the bloc.

Our #CohesionPolicy is one of the most concrete expressions of EU solidarity.
For more information
→ Read our Press Release https://t.co/URRCKRT5uL
→ Read our Questions & Answers https://t.co/y6GQMCugtb
→ See our Factsheets https://t.co/oWQlGq27WS
→ Follow @EU_Regional https://t.co/siFoAcT1Iy

The European Commission proposed a new methodology to distribute funds that takes into account unemployment levels and the reception of migrants, and not just economic output as previously.

That will mean lower allocations for eastern European countries. But Corina Crețu, the EU commissioner for regional policy, said this was because their economies have grown faster in recent years, and they have overcome the global financial crisis better than others in the EU.

Proud of our proposal for #CohesionPolicy beyond 2020: simpler rules, less red tape, big urban dimension, easier cross-border cooperation, and above all: support for EVERY region! Here it is, and in all languages: https://t.co/RI2Z5MSN3n pic.twitter.com/E1Vhglv0Mk

Her own country Romania, as well as Bulgaria, will receive 8% more than before. Unlike the Visegrad countries (Poland, Hungary, Czech Republic and Slovakia) Bulgaria and Romania didn’t oppose the mandatory quotas for relocation of refugees.

Confused about the EU budget figures on cohesion? @MehreenKhn has saved the day. Her table shows the Commission's allocation numbers — and the (unpublished) internal figures that help us understand what they mean

“The natural consequence of getting richer is a gradual decrease in cohesion policy support. This is a fact and in the end is a good sign,” she said.

Commissioner Jyrki Katainen, responsible for Jobs, Growth, Investment and Competitiveness, has previously argued that the solidarity the Visegrad expect from the EU’s cohesion policy also applies to the refugee crisis.

Moreover, the EU is also at odds with nationalist governments in Poland and Hungary over moves to limit judicial independence and free speech, and has threatened to withhold funding for flouting democratic standards. But EU officials described Tuesday’s formula as based on economics and not linked to those disputes. 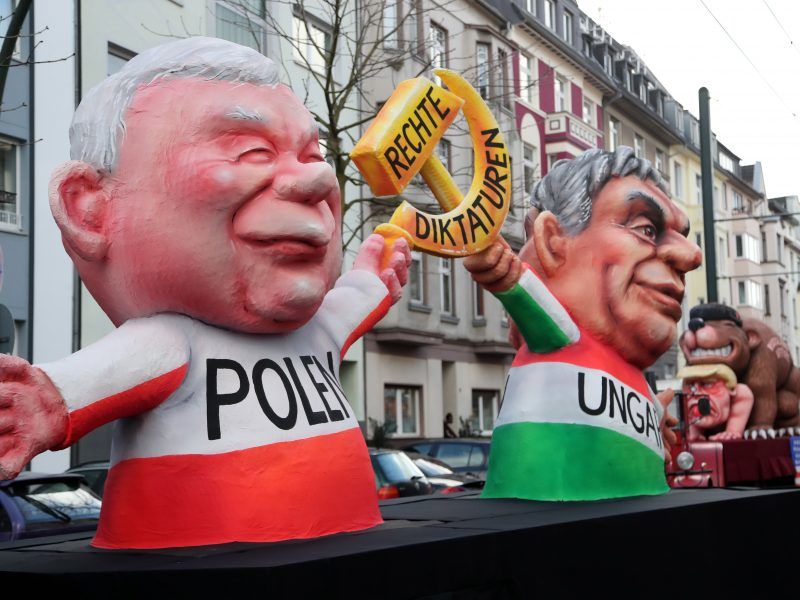 Southern states, who are still struggling to fully recover from the financial crisis, will see an increase in funding.

In an overall draft budget of €373 billion for cohesion between 2021 and 2027, 72.7 billion would be allocated to Poland, the highest share among EU states. But that represents a reduction from the €82.1 billion committed to Warsaw in the current seven-year budget period.

Polish Prime Minister Mateusz Morawiecki said his government would oppose the proposal. Poland’s neighbour Lithuania, which would also see a big cut, said it was “not acceptable”.

Greece, Italy and Spain face double-digit unemployment, while jobless rates are below 5% of the workforce in Poland, Hungary and the Czech Republic.

Italy and Greece are also the bloc’s main first-arrival countries for migrants and refugees from the Middle East and Africa. Central European countries, led by Poland and Hungary, have refused to host refugees under an EU relocation plan.

The Commission will publish in the coming days and weeks other detailed proposals on future expenditures on security, research and other budget headings.

One response to “Commission proposes more spending on Italy and south, less on Visegrad Four”