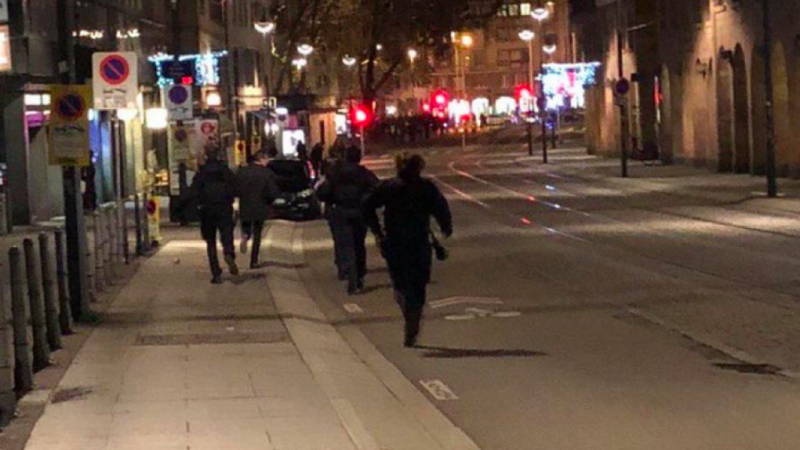 This article was updated on 14 December

Three people have been killed and 12 wounded as a gunman opened fire in the vicinity of the Christmas Markets in the centre of Strasbourg, France, on Tuesday evening (11 December). The suspected gunman, Cherif Chekatt, was shot dead in a brief gun battle with police after an intense, two-day manhunt,  police sources said.

Chekatt was killed in the Neudorf/Meinau area of the city shortly after a big police operation was launched around 2100 hrs (2000 GMT) on Thursday (13 December) about 2 kilometres from where he launched his attack on Tuesday. He was killed after shooting at police officers, who returned fire, one of the sources said.

Interior Minister Christophe Castaner told reporters later three police officers came across a man they believed to be Chekatt and went to arrest him. He turned to fire on them and they shot and killed him, Castaner said.

Chekatt, 29, was known to have a criminal record. He was intercepted by French security forces twice before he was caught.

The Strasbourg gunman yelled “Allahu Akbar” (Arabic: God is greatest) as he opened fire on people enjoying an evening out at a Christmas market, the Paris public prosecutor told reporters on Wednesday morning (12 December).

France raised its terror level and sent extra security backup to the city of Strasbourg, as security forces cordoned off areas of the city centre while the manhunt continued for the next 48 hours.

Our journalists @SamuelStolton and @alex_owski are in the European Parliament building in #Strasbourg. They are in lockdown because of the #StrasbourgShooting. One dead person confirmed, shooter is on the run. https://t.co/TARsIwA0iM

The French interior ministry called on the public to remain indoors and to avoid the city centre, parts of which have been cordoned off by police. Local authorities in the Grand-Est and Bas-Rhin told citizens in Strasbourg to “avoid the area of the police station,” which is near to the Christmas market.

Meanwhile, the European Parliament, which is conducting its plenary session this week, was put on lockdown as reports started to surface of the attack at around 8pm local time.

MEPs, staff, and journalists were holed up inside the European Parliament, before a heated debate between MEPs at 2am, in which European Parliament President Antonio Tajani pledged to prioritise that MEPs would be allowed to leave the building first, once the city centre had been declared safe.

Tajani pledges to offer MEPs taxi rides out of Parliament. Drama erupts in Parliament after calls from the public gallery for equal treatment for staff and journalists also locked up in the building #Strasbourg #Shooting

However, opposition from MEPs was strong, and around 3am individuals began to leave the European Parliament building under a heavily militarised police convoy.

Tajani said that the EU would “not be intimidated” by the attack and that European Parliamentary procedures would be set to go on this week as per usual.

#STRASBOURG SHOOTING Security barriers shut inside the European Parliament as the building is on lock-down. Security officials told me it can still take several hours until we will be allowed to leave. pic.twitter.com/R4rgdUAvFP

A source at the prosecutor’s office said the motive behind the shooting was not immediately clear and that an investigation was under way to see if it was terrorism-related.

French President Emmanuel Macron cut short a meeting with parliamentarians at the Élysée Palace following the events in Strasbourg and dispatched Interior Minister Christophe Castaner to the scene, the Élysée said in a statement.

Staff working at the European Parliament in Strasbourg, which is in the middle of a plenary session, have been locked inside the building and police have cordoned off sections of the city centre as the gunman remains on the run.

In a statement Tajani said: “I express all my sorrow for the victims of the Strasbourg attacks. This Parliament will not be intimidated by terrorist or criminal attacks. Let us move on. We will continue to work and react strengthened by freedom and democracy against terrorist violence.”

“My thoughts are with the victims of the Strasbourg shooting which I condemn with great firmness. Strasbourg is par excellence a city symbol of the Peace & Democracy of Europe. Values that we will always defend. The Commission stands alongside France.”