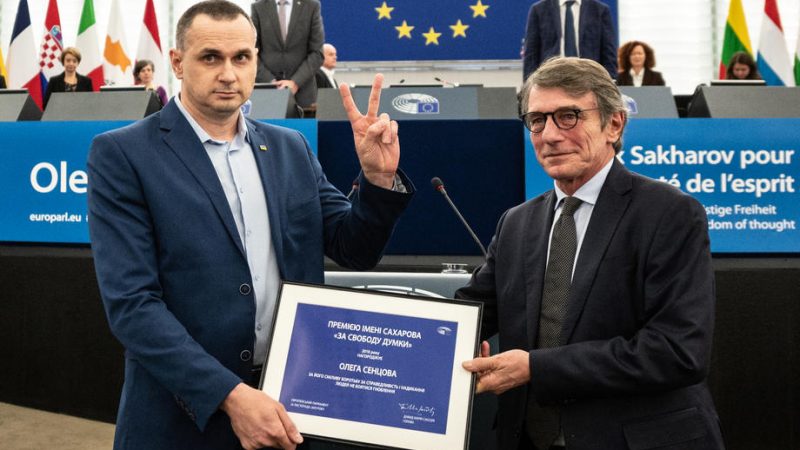 Sentsov was sentenced to 20 years in prison for “plotting terrorist acts” against the Russian “de facto” rule in Crimea. Amnesty International has described the court process as “an unfair trial before a military court”.

He was among 35 Ukrainian detainees released in a prisoner swap in September in exchange for an equal number of Russian prisoners. He is now based in Kyiv and remains a vocal critic of Russian President Vladimir Putin’s actions against Ukraine.

When announcing the 2018 Sakharov laureate a year ago, Parliament President Antonio Tajani called Sentsov “a symbol of the struggle for the release of political prisoners held in Russia and around the world”.

The Ukrainian was held in a Russian jail for the first five years of his 20-year sentence for allegedly planning attacks in Moscow-occupied Crimea. He spent 145 days on hunger strike in 2018, demanding that Moscow release all of its Ukrainian political prisoners.

“It’s a huge honour and also a huge responsibility. I accept this prize as a prize for all Ukraine political prisoners who have been in Russian prisons,” Sentsov told the European Parliament.

“I do not trust Putin and I call on you not to trust him either. Russia and Mr Putin will absolutely cheat you. They want to see Ukraine on its knees,” he added.

Before accepting the award from the new European Parliament President, David Sassoli, Sentsov addressed EU lawmakers in Strasbourg, urging them not to forget the plight of the Ukrainians in the ongoing conflict with Russia-backed separatists in eastern Ukraine.

More than 13,000 people have been killed during the more than five-year-old conflict between pro-Russian separatists and Ukrainian government forces.

“Every time, when some of you think about stretching out a hand of friendship to Putin over our heads, you should remember each of the 13,000 killed in Ukraine, the hundreds of our boys kept in prisons, who may be tortured as we speak, the Crimean Tatar, who may at this very moment be arrested,” Sentsov told MEPs in Strasbourg.

“We talk a lot about peace-building, about making peace with Russia, but I don’t believe what Putin says and I encourage you not to either,” he said.

“Russia is a lie, the Russians don’t want peace in the Donbas,” Sentsov said, referring to the eastern Ukraine region held by Russian-backed separatists.

On 9 December, French President Emmanuel Macron and German Chancellor Angela Merkel will host a so-called Normandy Four summit in Paris, in an effort to advance peacemaking efforts related to the conflict in Eastern Ukraine.

This four-way negotiation format with France, Germany, Russia, and Ukraine brought about the Minsk I and II agreements of 2014 and 2015, both aimed at ending the war in eastern Ukraine.

The meeting will be the first time the leaders get together in more than three years and comes after a breakthrough in talks between Russia and Ukraine last month.

Relations between Ukraine and Russia collapsed following Moscow’s annexation of the Crimean peninsula in 2014, which prompted Western sanctions.

While Macron sees a cautious rapprochement with Putin’s Russia as a key early step to building Europe’s future security, some European allies have been irritated by his soft position on Moscow.