Migration crisis talks were set to be held between Turkish President Recep Tayyip Erdoğan and senior EU officials in Brussels on Monday (9 March), as Germany said the bloc was considering taking in 1,500 child refugees.

Erdoğan called on Greece to “open the gates” to the migrants after Greek police used tear gas and water cannon in skirmishes with crowds at the border.

“I hope I will return from Belgium with different outcomes,” he said at a speech in Istanbul on Sunday as he announced the meeting.

“Hey Greece! I appeal to you… open the gates as well and be free of this burden,” he said, adding: “Let them go to other European countries.”

Early on Monday, Germany said the EU was considering taking in up to 1,500 migrant children who are currently housed in Greek camps.

“A humanitarian solution is being negotiated at the European level for a ‘coalition of the willing’ to take in these children,” the government said in a statement.

Berlin was ready to take in an “appropriate” share, it added, saying the country wanted to support Greece in the “difficult” situation it is facing.

Concern over the plight of the minors have grown as they either require urgent medical treatment or are unaccompanied by adults.

On Friday, Erdoğan ordered the Turkish coastguard to prevent risky Aegean sea crossings after more than 1,700 migrants landed on Lesbos and four other Aegean islands from Turkey over the past week.

The coastguard however said Turkey’s policy of allowing migrants and refugees to leave by land was untouched, and the instruction only affected sea crossings.

They will “discuss EU-Turkey matters, including migration, security, stability in the region and the crisis in Syria,” Michel’s spokesman said on Twitter.

In 2016, Turkey and the EU agreed a deal whereby Brussels would provide billions of euros in aid in exchange for Turkish authorities curbing the flow of migrants.

But Ankara has repeatedly accused the bloc of not fulfilling promises that were made while Europe suffered its worst refugee crisis since the Second World War. Over a million people fled to the continent in 2015.

Erdoğan’s top press aide has said one of the unmet conditions was that the EU would take in refugees from Turkey.

After the talks, Borrell promised an additional €170 million in aid for vulnerable groups in Syria. 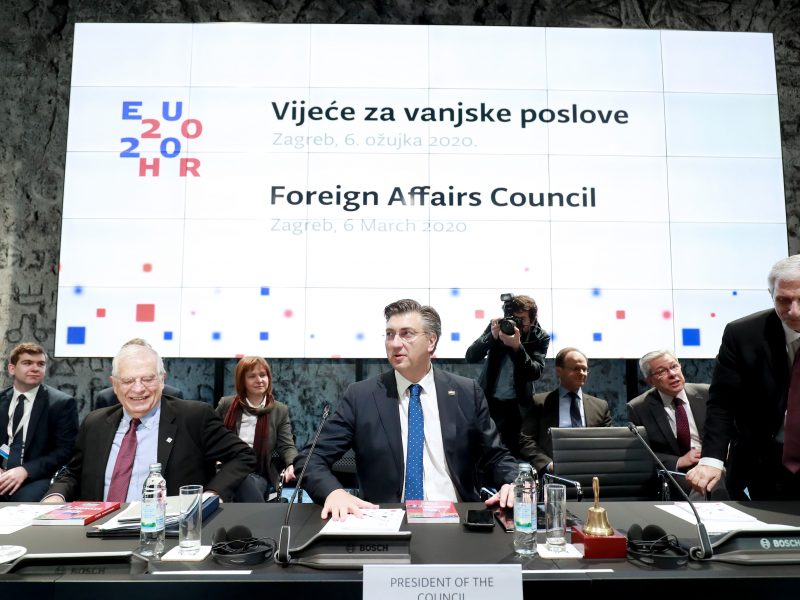 The EU is willing to provide more money for migrants stranded in Turkey, but Ankara must refrain from using them as a bargaining chip, the bloc’s foreign ministers announced after an extraordinary meeting about the crisis in Syria’s northwestern Idlib province, held in Zagreb on Friday (6 March).

Erdoğan has felt extra pressure as nearly a million people in Syria’s northwestern province of Idlib fled towards the Turkish border during the recent Syrian regime assault backed by Russia and Iran.

But the president and his Russian counterpart Vladimir Putin agreed a ceasefire on Thursday after Turkey launched an offensive against Damascus following the deaths of 59 Turkish security personnel in attacks blamed on the regime.