Recep Tayyip Erdoğan and supporters. [Presidency of the Republic of Turkey]

In an interview with broadcaster CNN Turk, Erdoğan said everything “from A to Z” in Turkey’s relations with Europe would be reviewed after the 16 April referendum on constitutional changes that would extend his powers.

He also said he would meet “face to face” with the new US administration in May. The relationship between Erdoğan and US President Donald Trump, both populist leaders, will be closely watched, with ties between the NATO allies deeply strained.

Turkey has been incensed by US support for a Kurdish militia in Syria it sees as a terrorist group, and by the continued presence in the United States of Fethullah Gülen, the Turkish cleric Ankara blames for a failed coup last July and wants extradited.

Turkey’s relations with the European Union have meanwhile become particularly acrimonious after Germany and the Netherlands cancelled planned campaign rallies on their territory by Turkish officials seeking to drum up support for a ‘yes’ vote in the April vote.

Both cited security concerns for their decision, but Erdoğan has accused them of using “Nazi methods” and trampling on free speech. He made no apology on Thursday for the comparison.

“You get disturbed when we say it is fascism, it’s Nazism, but what you are doing fits in that definition,” he said. 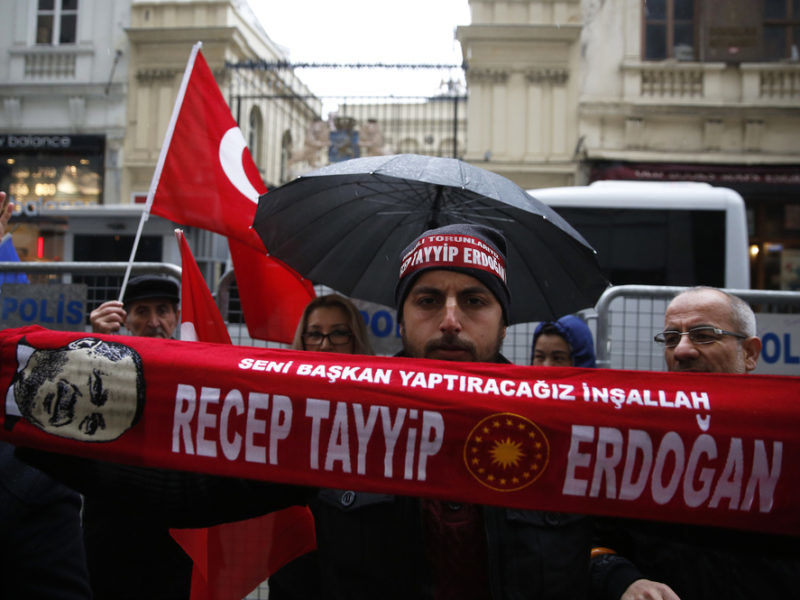 Austria’s parliament is set to decide on whether or not to formally ban foreign politicians from campaigning on its territory. EURACTIV Germany reports.

Erdoğan said European countries were allowing events for the ‘no’ campaign while banning Turkish officials from rallying his supporters. He accused Germany of supporting terrorism and said he had no plans to visit the country before the referendum, contrary to some recent media reports.

The European Commission earlier said it had summoned the Turkish ambassador to explain comments by Erdoğan that Europeans would not be able to “walk safely on the streets” if they kept up their current attitude toward Turkey.

Despite the row, German Foreign Minister Sigmar Gabriel said during a trip to Athens on Thursday that communication channels between the EU and Turkey must remain open.

The row has placed Europe in an awkward position with Ankara, which has seen its decades-old bid to join the bloc move at snail’s pace due to concerns over its human rights record, ethnically-split Cyprus, and reluctance among some European countries to admit a largely Muslim nation.

Turkey is an integral part of a deal to keep hundreds of thousands of refugees and migrants fleeing the Middle East and beyond from moving to Europe, in return for €3 billion in EU financial aid to Ankara.

Erdoğan also said a US and British ban on devices bigger than a cellphone in the cabin on flights from several countries including Turkey had damaged mutual confidence and said he hoped the mistake would be corrected soon.

Turkish Airlines, which is 49% state-owned, could be particularly hit by the restrictions. More than half of its international passengers are transit customers who could instead travel through Europe or other hubs.