Publishing what it said were minutes of a tense meeting last November, the euro2day.gr financial news website revealed deep mutual irritation and distrust in talks between Erdo?an and the EU’s two top officials, Jean-Claude Juncker and Donald Tusk. 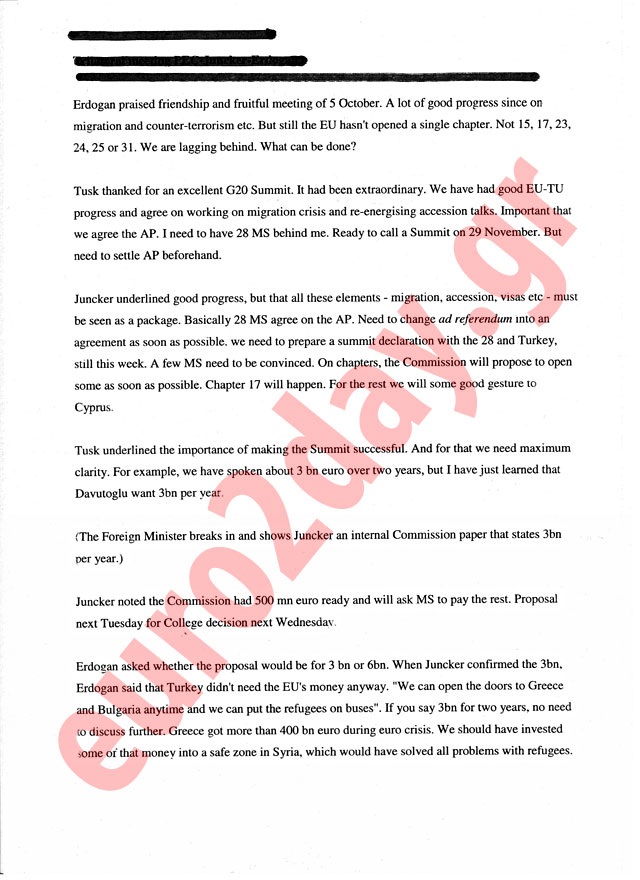 The EU officials were trying to enlist Ankara’s help in stemming an influx of Syrian refugees and migrants into Europe. Over a million arrived last year, most crossing the narrow sea gap between Turkey and islands belonging to EU member Greece.

Tusk’s European Council and Juncker’s European Commission declined to confirm or deny the authenticity of the document, and Erdo?an’s office in Ankara had no immediate comment.

The account of the meeting, in English, was produced in facsimile on the website. It does not state when or where the meeting took place, but it appears to have been on 16 November, in Antalya, Turkey, where the three met after a G20 summit.

“We can open the doors to Greece and Bulgaria anytime and we can put the refugees on buses … So how will you deal with refugees if you don’t get a deal? Kill the refugees?” Erdo?an was quoted in the text as telling the EU officials.

It also quoted him as demanding €6 billion over two years. When Juncker made clear only half that amount was on offer, he said Turkey didn’t need the EU’s money anyway.

The EU eventually agreed on a €3 billion fund to improve conditions for refugees in Turkey, revive Ankara’s long-stalled accession talks, and accelerate visa-free travel for Turks, in exchange for Ankara curbing the numbers of asylum seekers pouring into neighbouring Greece.

In heated exchanges, Erdo?an often interrupted Juncker and Tusk, the purported minutes show, accusing the EU of deceiving Turkey, and of Juncker personall being disrespectful to him.

“You have been mocking us,” Erdo?an is quoted as saying.

The Turkish leader was also quoted as telling Juncker, a former prime minister of tiny Luxembourg, to show more respect to the 80-million-strong Turkey. “Luxembourg is just like a little town in Turkey,” he was quoted as saying.

Juncker is quoted as stating that the delay in the publication of the Commission’s progress report on Turkey has been done at Erdo?an’s request. Indeed, the report was delayed after the Turkish elections, but the EU executive has denied that it was doing Turkey a favour.

The tense dialogue highlighted the depth of mutual suspicion at a time when the EU is banking on Turkish help to alleviate its worst migration crisis since World War Two.

The EU says the flow of refugees from Turkey, which hosts more than 2.5 million displaced Syrians, has not decreased in any significant way since the bloc’s joint summit with Ankara in November, when they agreed on the fund for refugees.

The report prompted a member of the European Parliament from the Greek centrist To Potami party to ask the European Commission to confirm the purported talks.

“If the relevant dialogues between the EU officials and the Turkish President are true, it seems that there are aspects of the deal between Ankara and the EU which were concealed on purpose,” Miltos Kyrkos said in the question he submitted to the Commission.

“We want immediately an answer on whether these revelations are true and where the Commission’s legitimacy to negotiate, using Turkey’s accession course as a trump card, is coming from,” Kyrkos said.