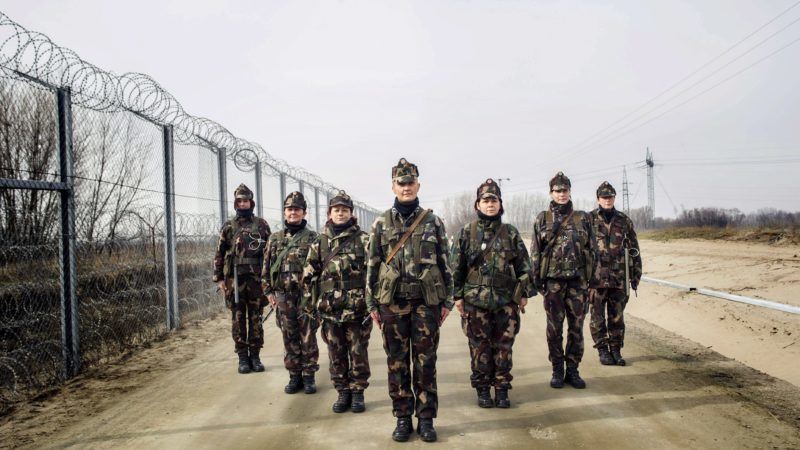 A picture made available on 07 March 2017 as part of a photo essay shows Hungarian female soldiers as they pose for a picture by the temporary border fence on the Hungarian-Serbian border near Roszke, 180 kms southeast of Budapest, Hungary, 27 February 2017. [Kea Kallos/EPA]

The refusal by Hungary, as well as its ally Poland, to take in a single asylum-seeker under a 2015 EU scheme has infuriated Brussels, Berlin and Paris, and many other EU states, triggering a broader debate in the bloc about key values.

Hungary and another ex-communist EU state Slovakia challenged the obligatory relocation of refugees in the bloc’s top court, the Luxembourg-based European Court of Justice (ECJ), and a ruling is due on Wednesday.

An initial indication from the court suggests the two east European countries are set for a resounding defeat, which could also lead to hefty fines being imposed.

Ahead of the ruling, Hungary said it would ask the European Commission for about €400m to cover half of the cost Hungary has incurred for border management.

Orban wants to match Trump, asks Brussels to pay half of its anti-migrant fence https://t.co/HuygoCrDJY pic.twitter.com/VZsz74A28w

Hungary has fortified its borders with Serbia and EU state Croatia with a fence, police and troops, and says it is protecting the rest of EU from illegal migration.

The Commission refused the request.

“We do support border management measures at the external borders. This can be surveillance measures. It can be border control equipment… But fences, we do not finance,” said spokesman Alexander Winterstein.

However the EU could consider giving more cash to Hungary for border protections, it was explained.

For Bulgaria, who has built a fence at its Turkish border, the Commission provided over €100m, but officially this amount goes for cameras and other equipment, not for erecting the fence itself.

Some 1.7 million refugees and migrants have reached EU shores through the perilous Mediterranean crossing since 2014.

Overwhelmed by chaotic arrivals in 2015, the bloc has tightened its migration policies and external borders, but many still see Hungary’s fences as inhumane.

They accuse Hungarian Prime Minister Viktor Orbán of not showing enough solidarity with Italy and Greece, the main states of arrival in the EU, as well as Germany and other wealthy members of the bloc which take in most of those people who make it to Europe.

Berlin on Friday reminded Hungary that solidarity should be reciprocal.

“It’s clear Orbán is coming up with this €400 million demand to kind of offset it against the ECJ ruling. They are going to lose it badly, there is no other way,” said a senior EU diplomat.