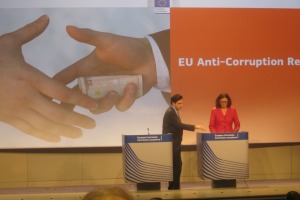 The European Commission said yesterday (3 February) that its first anti-corruption handbook for the 28 member states showed that there were "no corruption-free zones", but officials declined to name and shame individual countries.

The Commission published yesterday (3 February) its much awaited 40-page anti-corruption report covering the overall situation in the 28-country bloc, coupled with individual chapters on each country, of approximately a dozen pages each. The package is supplemented by a 230-page special Eurobarometer survey on corruption.

The EU executive said that its rather modest ambition was to launch a debate on corruption and identify ways in which the EU could help fight the scourge.

Corruption is estimated to cost the EU economy €120 billion per year. That amounts to about 1% of EU GDP and represents only a little less than the annual budget of the European Union.

The anti-corruption package has been in the pipeline since Home Affairs Commissioner Cecilia Malmström announced the establishment of an EU anti-corruption reporting mechanism in June 2011, saying a first report would be published by the end of 2013 (see background). The publication of the report was delayed, she admitted, adding that the quality of the report was now better.

Malmström told reporters that the handbook assessed how each member state tackled corruption, how existing laws and policies worked in practice, and contained suggestions for how each EU country could step up the fight against corruption.

“The Report will hopefully provide everyone – politicians, the public, media and practitioners – with a useful tool for taking national corruption policy forward,” Malmström said.

According to the Eurobarometer, a vast majority (76%) of Europeans think that corruption is widespread in their own country. Also, more than half of Europeans (56%) think the level of corruption in their country has increased over the past three years, an apparent indication that the eurozone crisis has impacted negatively on the fight against corruption.

The report shows the state of play in the member states om terms of legislation, institutional framework, and problematic areas for each individual country. “Good practices” are identified with suggestions for “future steps”.

The report cites an integrity programme in the Flemish region of Belgium as an example of good practice. Wallonia, the country’s French-speaking region, has no such initiative.

The report also advises Belgium to increase the capacity of its justice and law enforcement system to prevent the statute of limitations on corruption cases from expiring during lengthy criminal proceedings.

Malmström strongly insisted that the Commission made no “ranking” of corruption levels in EU countries, saying that other organisations were engaged in this activity. The NGO Transparency International had ranked EU countries according to perceived corruption levels, with the “most corrupt” being Greece, Bulgaria and Italy, and the least Denmark, Finland and Sweden.

The commissioner was also careful not to speak of dividing lines and of major divisions between North and South, acknowledging only that Bulgaria and Romania were special cases, which required continued monitoring.

The Commission was also careful in the report not to mention countries by name. Sources told EURACTIV that EU countries had rejected the option of “naming and shaming”, and this had been the main reason for the delay of the report’s publication by a few months.

The paper says that “in some member countries”, vulnerability to corruption in public procurement processes is the main problem, while “in others” political party financing is not transparent enough. Widespread corruption at the level of local authorities is another example, with “many healthcare patients” having to “pay under the table to receive proper medical care”.

“In one Member State, numerous cases of alleged illegal party funding at central or regional level were also linked to organised crime groups”, the report says, without mentioning Italy.

The report also shies away from naming individuals or parties. The report cites “investigations involving a former treasurer of a political party” in Spain. The prime minister of Spain, Mariano Rajoy, last year became embroiled in a corruption scandal, saying that he made a mistake in trusting the former treasurer of his Popular Party, Luis Bárcenas.

Malmström said that the idea had been discussed to conduct a corruption investigation into the EU institutions but that it was decided that the EU executive could not do this independently.

EURACTIV asked Malmström why the EU survey asked business representatives if corruption was bad for their business and not the other way around.

“As you can imagine, being responsible for law and order, we did not ask that question. But I think you’re right. I think a lot of companies actually make good business out of corrupt contracts,” she said.

“We welcome this report as an important step in the EU's collective effort to scale up its anti-corruption efforts,” said Miklos Marschall, Deputy Managing Director of Transparency International. “It is a stark warning against complacency about corruption in any EU country.”

“Trust in Europe’s leaders is falling because relations between business and the public sector take place in the dark, leaving citizens with questions about whose interests are being taken care of”, said Marschall. “To bridge the gap between politics and people, there must be greater transparency in public life and more public officials held to account for their actions.”

EU ministers need to follow up with concrete commitments when they meet for the Justice & Home Affairs Council in Brussels in March, Transparency International said.

“Corruption crosses borders and is a threat to the integrity of the single market”, said Carl Dolan, Director of the Transparency International EU Office. “For these reasons, Europe needs coordinated action to tackle the failings identified in the report, such as EU legislation on whistleblower protection”.

A new independent study by Czech, Polish and Slovakian watchdogs has published a “Shadow report” on misuse of EU funds by the Commission and the three studied member countries.

Up to a third of the EU resources allocated to the countries is not reimbursed by the EU programs and—as the authors of the study believe—this is largely due to the effects of political corruption and lack of rules and transparency.

“It is not surprising that EU funds are linked with chronic political corruption in the three studied states since not even the basic rules against conflicts of interest are in effect. EU hasn't been successful in convincing the governments to do so,” comments Martin Fadrný, coordinator of the research team. Among the key findings of the research team is that anonymous companies are allowed to be beneficiaries of EU funds and there is almost nothing preventing politicians from owning such companies.

Approx. CZK 14 billion (€500 million) from EU-funded Czech Operational Program Transport went to the construction company Viamont while its former owner held the position of minister of transport and could easily influence officials managing the EU money. Read the full report

The European Ombudsman, Emily O'Reilly, welcomes the European Commission's first Anti-Corruption Report and its recommendations to the various national administrations and invites the Commission to add a chapter on the performance of the EU administration to the next report.

In June 2011, Cecilia Malmström, the EU's commissioner for home affairs, unveiled the intention of the Commission to regularly report on the state of play of corruption in EU member states.

The commissioner announced the establishment of an EU anti-corruption reporting mechanism, capable of identifying "failures and vulnerabilities across the 27 EU member states".

Corruption is estimated to cost the EU economy €120 billion per year. That is one percent of EU GDP and represents only a little less than the annual budget of the European Union.

According to the European Commission, corruption harms all member states and the EU as a whole, lowering investment levels, hampering the fair operation of the internal market and reducing public finances. Different forms of corruption are listed: political corruption, corrupt activities committed by and with organised criminal groups, private-to-private corruption or petty corruption.

According to specialists, the fight against corruption at EU level may in future help to reduce the risk of crises such as those seen in Greece and Portugal.