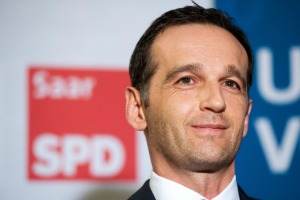 Chancellor Angela Merkel's new grand coalition is in disagreement over the implementation in Germany of the EU's Data Retention Directive, decided years ago in the wake of the terrorist attacks in London and Madrid. euractiv.de reports.

The Social-Democrat Justice Minister Heiko Maas (SPD) has said he would wait on a decision by the European Court of Justice (ECJ) before issuing a legislative proposal to implement the EU's 2006 Data Retention Directive in Germany (see background).

Maas's cautiousness follows a decision by Germany's highest court, which in a 2010 ruling annulled the legal texts adopted to implement the directive into German law. The ruling triggered a court action by the European Commission, which referred the matter to the ECJ in 2012, requesting that fines be imposed on Berlin for non-compliance.

Many Germans were outraged by the directive, which required telecom firms to retain all citizen's telephone and internet data for up to two years. The measures were adopted in 2006 as part of the EU's drive to fight terrorism following the 2004 train bombing in Madrid and bus explosion in London the year after.

The issue is returning to haunt Chancellor Merkel's new grand coalition, with tensions between the Social Democrat SPD party and the Conservative CDU-CSU becoming apparent as the ECJ ruling approaches.

In its coalition agreement signed last November, the ruling German CDU-CSU-SDP alliance promised to comply with the directive, including the most controversial parts related to the collection and storage of citizen's private telecommunications data.

But the SPD hopes to use the ECJ ruling to kill the Data Retention Directive. According to Maas, the court must decide "whether or not the directive infringes on the rights of EU citizens", he told German magazine Der Spiegel, saying the court could request "far-reaching changes" to the directive or even to scrap it completely, making its implementation unnecessary.

"In that case we would have to start a completely new discussion over data retention," Maas said.

"As far as I'm concerned, the [implementing] measure will have to wait [for the ECJ ruling]", he added.

However, Merkel's centre-right CDU party sees it differently and argues the directive has to be implemented straight away.

According to the Conservatives, the opinion of the ECJ's advocate general largely fits with the German constitutional court's ruling, and does not state that data retention in itself is contradictory with fundamental rights. The ECJ, they point out, will probably conclude that data retention as such is acceptable in some circumstances.

For the Christian Democrats, debate now centers on details – how data is stored and secured, how long this data is retained (the CDU is suggesting three months) and in what specific cases it can be used immediately.

The SPD's argument to delay implementation therefore "does not represent the current state of negotiations, and certainly not the arrangements made," said Wolfgang Bosbach, CDU expert for internal affairs, stressing that Maas must know that himself.

“In terms of internal and legal policy, that would not be a good start for the new year or for the upcoming election period," Bosbach told Deutschlandfunk radio.

The German coalition agreement, signed off in November, clearly states: "We will implement the EU directive on the collection and use of telecommunications. In this way, we will avoid the imposition of penalty payments through the European Court of Justice."

"We want to implement data retention measures in accordance with the guidelines of the Federal Constitutional Court," he said using deliberately vague wording to keep both sides at peace. According to Seibert, a common assessment will be reached during the upcoming coalition meeting on 22 and 23 January.

Austria, Belgium and Sweden have also been accused by the European Commission of refusing to comply with the directive, but Germany remains the only member state still in legal proceedings. If the directive stands, Germany could face fines of around €315,000 per day.

Meanwhile, the European Commission said it was awaiting the ECJ decision and would not comment further on the matter.

However, some changes to the directive are expected in the future. On its website, the EU executive said it intended to propose changes to data retention, although there is no precise timetable at present.

The CDU has argued that Germany could take a leading role in amending the directive by issuing a national implementing law now.

In an official opinion, Advocate General Pedro Cruz Villalón argued the directive is a violation of the EU's Charter of Fundamental Rights, calling it "a serious interference with the fundamental right of citizens to privacy". Villalón sees the two-year upper limit required to collect and store data as disproportionate to the purpose of preventing and investigating crime. While proposals by Advocates General are not legally binding, ECJ rulings often resemble these recommendations.

"It would be negligent to run to the drawing board too hastily, when the EU legal basis could be toppled in just a few months".

"We simply must get used to the fact that we are a coalition partner now. That requires a different type of behaviour than before". He added that the coalition agreement applied to everyone and "not only for those who personally negotiated certain passages."

Jens Kubieziel from the working group on data retention warned against total surveillance:

"The data retention mentality is totalitarian and is a great threat to our right to a self-determined life. Federal Justice Minister Maas has our complete support in waiting for an outcome over mass complaints against the unspeakable EU requirement for data retention without suspicion."

"The fact that many internal affairs politicians do not want to let go of this surveillance tool is bordering on outright stubbornness". He added: "Those who are rushing to fulfil the coalition agreement would do well to learn from the effects of the NSA-scandal by avoiding data retention and instead, protecting people from attacks on their fundamental rights," Steffens said.

The so-called Data retention directive was adopted in 2006 following the Madrid terrorist train bombings in 2004 and the public transport bombings in London in 2005.

Separately, the European Commission published in January 2012 a broad legislative package aimed at safeguarding personal data across the EU.

But several supreme courts of EU member states declared that the entire directive, the implementation or parts thereof as unconstitutional. Several member countries only belatedly implemented the directive and some countries, including Germany and Belgium, have not transposed it at this point in time.

The European Court of Justice (ECJ) has requested Sweden to pay a lump sum of €3 million for its delay in transposing the directive, has issued a warning to Belgium and has taken Germany to court.