EU courts Turkey on migration crisis ahead of summit 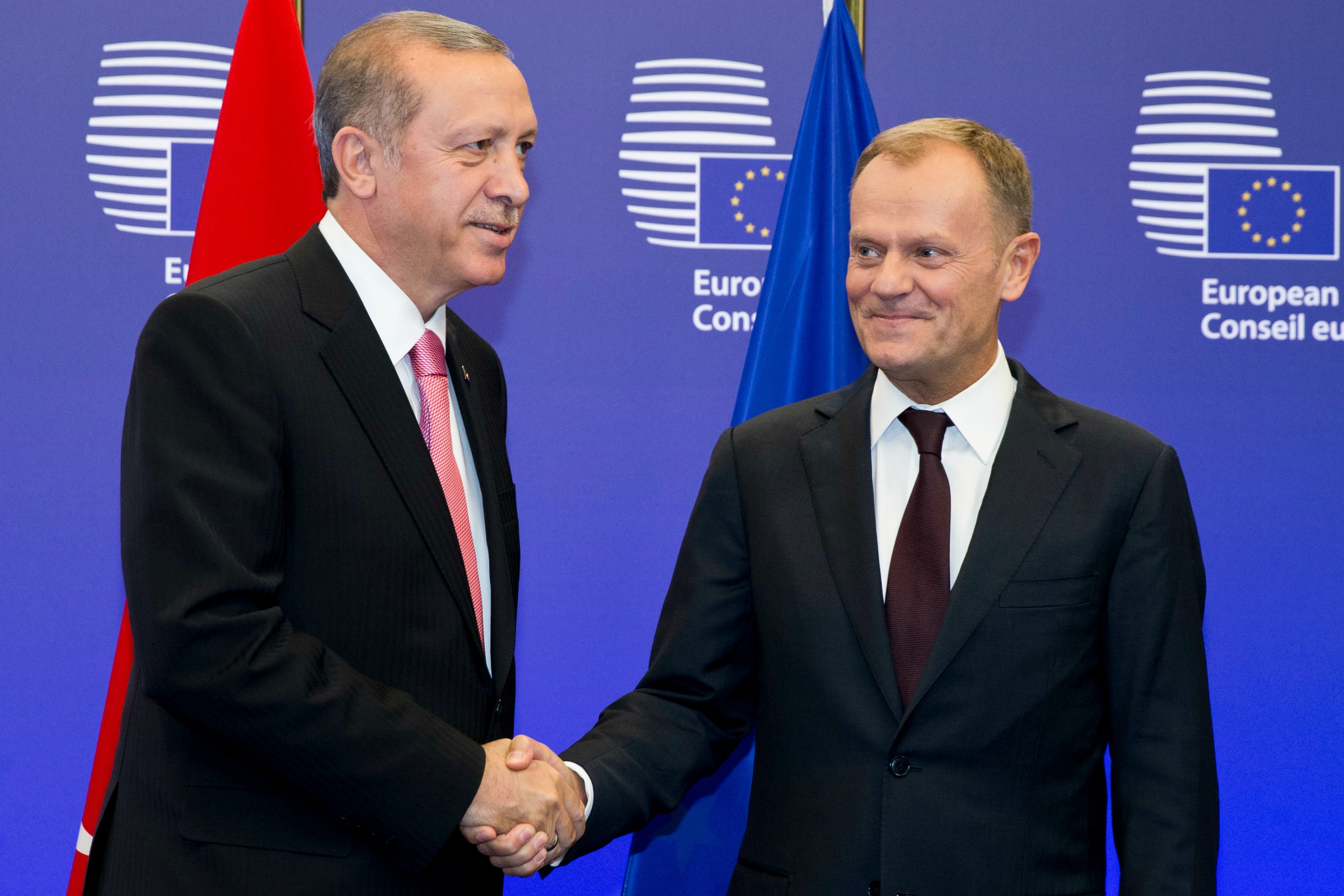 Erdo?an and Tusk on 5 October [Council]

European Council President Donald Tusk told Turkey yesterday (13 October) that it could win concessions from the EU, such as visa-free travel, if it successfully reduces the flow of refugees reaching Europe. Three EU Commissioners are due to visit Ankara today, ahead of Thursday’s (15 October) EU summit.

In a letter to EU leaders setting the agenda for the summit he will chair in Brussels on Thursday, Tusk noted the start this month of negotiations on the migration crisis with Turkey, which EU officials say wants more visa waivers, more EU funding and progress on its longstanding application to join the bloc.

“An agreement with Turkey makes sense if it effectively reduces the inflow of refugees,” Tusk wrote on the eve of a visit by senior European Commission officials to Ankara. “Concessions will only be justified when this goal is achieved.”

Tusk, a conservative former prime minister of Poland, is trying to steer the divided 28-nation EU Council toward consensus on proposals put forward by the executive Commission. He visited Turkey last month and hosted Turkish President Recep Tayyip Erdo?an on a visit to Brussels last week during which the Commission set out various ways in which Ankara could help control migration.

Germany, France and others are reluctant to accept populous, Muslim Turkey into the EU and raise human rights concerns over Erdo?an’s policies toward, among others, Kurds and the media.

Tusk warned of a “long march” toward greater cooperation with countries in the Middle East that are hosting millions of Syrian refugees and highlighted how Russia’s new military action in Syria, at odds with Turkish calls for EU support to establish “safe zones” in the north, added to complexities in the region.

“We must be ready for spring and the threat of bigger waves flowing to Europe,” he said, noting warnings from regional leaders that “millions” more could start heading for Europe.

“As exaggerated as this opinion may sound, it is our obligation to be prepared for all scenarios,” Tusk said. He said leaders should consider changes to the Dublin system, which makes frontier states responsible for asylum, and strengthen EU borders, possibly by creating a Union border guard force.

Tusk, despite the crisis aims to end the summit, which begins at 4 p.m. (1400 GMT), without resuming for a second session on Friday, officials said.

The meeting will also “take stock of the next steps” in negotiations with Britain on changes it wants before holding a referendum on membership by the end of 2017.

>> Read: EU waits for Cameron to make his move

The Commission said yesterday it was hoping to re-schedule the visit of three members of the EU executive to Ankara for today (14 October). First Vice-President Frans Timmermans, Home Affairs Commissioner Dimitris Avramopoulos and Neighbourhood Commissioner Johannes Hahn are due to continue negotiations over the Action Plan proposed by Juncker to Erdo?an on 5 October.

Timmermans and Hahn had been due to travel to Turkey on 11 October, but the visit was postponed in view of the terrorist attack that took place in Ankara on 10 October, to respect the nation’s three days of mourning.

Turkey is targeting Islamic State in investigations of the double suicide bombing in Ankara that killed up to 128 people, while opponents of Erdo?an blamed the government for the worst such attack in Turkish history.

Government officials made clear that despite alarm over the attack, there would be no postponement of the 1 November election.

The visit of the commissioners is important in the context of this week’s summit, the main topic of which will be the refugee crisis.

Information has filtered through that Turkey has given a lukewarm response to the Commission’s plan to assist Ankara in coping with over two million Syrian refugees, indicating that funding needs to be drastically increased.

Reportedly, the Commission is also under attack from some member states for having tabled this plan without prior consultation at EU Council level.

On Sunday, German Chancellor Angela Merkel will travel to Turkey. A German government spokesperson said the visit will focus on the countries’ “common fight against terrorism,” the situation in Syria and dealing with migrant crisis.