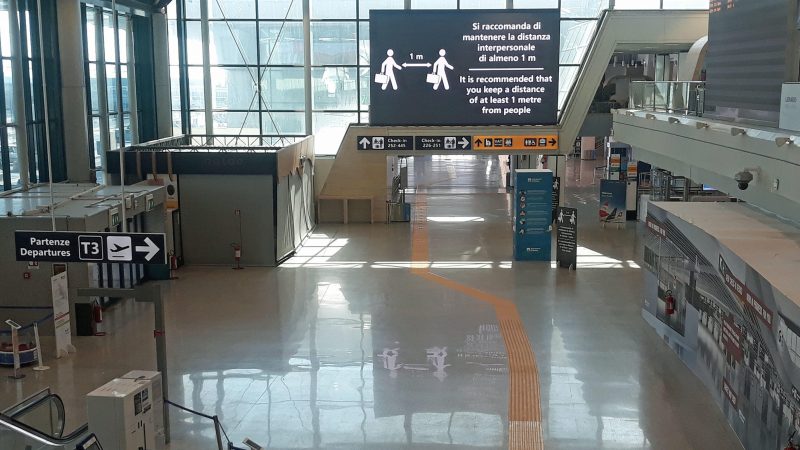 The terminals of the airport 'Leonardo Da Vinci' empty due to the further operational reduction that was decided by the management company, Rome Airports, after the 95%drop in air traffic compared to the same period last year, Fiumicino, Rome, Italy, 7 April 2020. [Telenews/EPA/EFE]

The European Union should prolong until mid-May curbs on travelling to the continent, the bloc’s executive arm said on Wednesday (8 April) of extraordinary measures meant to limit the spread of coronavirus.

The bloc decided in mid-March to shut its external borders for any non-essential travel for a month, largely in a bid to prevent the 27 member states from closing frontiers inside Europe’s control-free travel zone to curb the disease’s spread.

Emergency border closures within Europe have hit the transport of goods, further aggravating economic problems stemming from coronavirus lockdowns across the continent.

Some airlines, including Lufthansa’s Belgian subsidiary Brussels Airlines, have already effectively implemented the move by extending suspension of flights until 15 May.

The move, proposed by the European Commission on Wednesday, would cover 30 European countries that sit in – or are aligned with – the continent’s open border Schengen zone.

In practice, however, countries have often followed their own judgement on internal borders, leading to sometimes long lines forming at their frontiers and heated exchanges between capitals on how to remedy that – one of many examples of how the pandemic is stretching European unity and solidarity.