According to unofficial information cited by various media outlets, Timmermans assured the Council ministers of the improvement in relations with Poland but stressed that it is too early to talk about an agreement. He also explained the reasons for launching the Article 7 procedure, recalling at the same time concerns about the possibility of politicisation of the Polish judiciary.

Timmermans admitted that Poland has the right to reform its judiciary, but in accordance with EU standards. He also pointed out that for two years the Commission had failed to establish a dialogue with Poland on the subject.

“We now have a new situation, in the sense that we have a dialogue with Poland, but of course the dialogue is useful if it brings results,” Timmermans said after the meeting. “I am waiting for documents from Poland and we will assess whether there is a chance of progress in this case,” he added.

Szymański: All explanations in the white paper

The deputy head of Polish diplomacy, Konrad Szymański, assured that Poland will soon present the so-called White Paper, in which it will present the implications of the judiciary reform, as well as the comparison of judicial systems in the member states. With this comparison, the Polish government aims to display that the regulations implemented in Poland do not differ from those applicable in other EU countries.

In the opinion of Szymański, thanks to the White Paper, European governments will be able to familiarise themselves thoroughly with Polish changes in the administration of justice and assess the situation on this basis. “We will expect member states to make their own assessment of this situation and really say whether there is any apparent risk of a serious violation of the rule of law,” media quoted Szymański as saying. 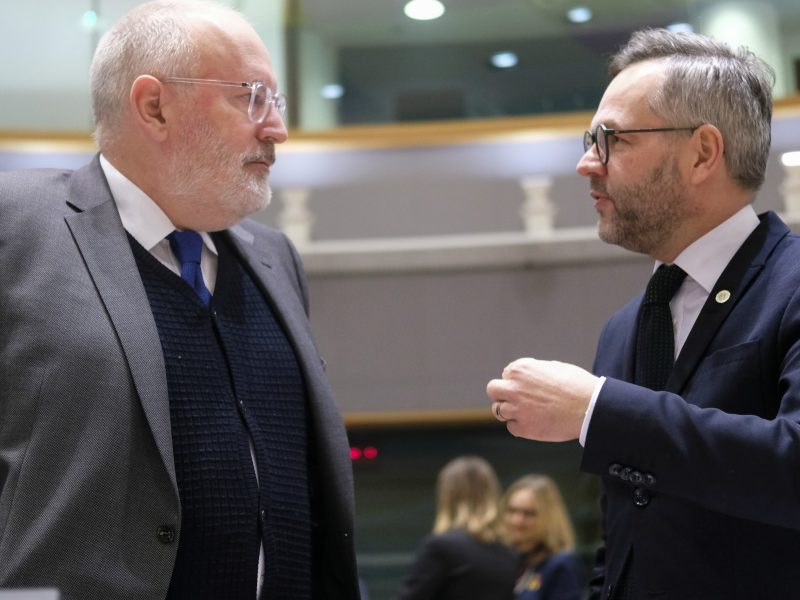 “In our opinion, there is no such serious risk or serious threat. So there is no reason to conclude the procedure in a confrontational manner against Poland,” the deputy minister added. Timmermans declared that he would report to the EU Council on the progress in dialogue with Poland as soon as he received Polish explanations.

After Tuesday’s meeting, Szymański emphasised that the Polish side expects the EC to “do exactly what we are offering today”.

“We would like member states to approach the Polish evaluation of justice reforms with the same attention, trust and impartiality, so that each of these countries could express their own opinions,” he told reporters in Brussels.

Most member states supported the EC

According to unofficial information, 24 member states took part in the debate about Poland in total (only Bulgaria, which holds the EU Presidency, and Austria, which will take over from Bulgaria in July, abstained).

The Swedish minister voiced the strongest tone, arguing that the issue of rule of law is about the credibility of the entire EU. On the other hand, the gentlest voice turned out to be Hungary, which not only supported the Polish side but even criticised the Commission for the pressure exerted on Poland and interference in a member state’s internal affairs.

The majority of those present, however, supported the Commission, stressing the importance of the dialogue being held. France and Germany presented a common position in which they emphasise that the Polish issue is not internal policy but a very important matter for the whole community, which requires an explanation. Both countries also called for the recent dialogue with Poland to bring concrete and positive changes by the end of March.

Szymański assessed after the meeting that there was no significant change in the Commission’s position regarding the formal side of the process. “The discussion (…) was similar to the one we witnessed a few months ago. The member states, which is quite obvious, appreciated the dialogue and emphasised the importance of rule of law for the EU,” he told journalists.

He added that during the discussion he did not notice any critical voice in relation to Poland. “I noticed the expectation that the dialogue would bring results,” said Szymański.

Debate to be continued after March 20

Meanwhile, Polish Prime Minister Mateusz Morawiecki is to meet with the Commission President Jean-Claude Juncker in Brussels on 8 March. He also predicts that by that time the White Paper announced by Szymański will be published.

Ministers will revisit this issue depending on the course and effects of talks between Poland and the Commission, which gave Poland three months to implement its recommendations. The deadline set for Poland to respond to the recommendations on the rule of law expires on March 20 and then a decision or a vote on the Polish issue under Art. 7.1 is to be taken.