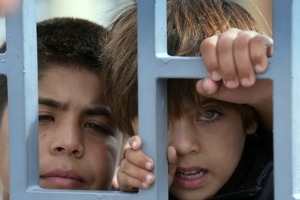 EU justice ministers held talks in Luxembourg yesterday (8 October) on how to avoid tragedies like the one which saw more than 200 African migrants drown near the Italian island of Lampedusa last week and how to cope with the rising number of Syrian refugees.

EU foreign affairs chief Catherine Ashton and representatives from the Commission, the European Asylum Support Office (Easo) and the EU agency for border management Frontex briefed ministers on the latest developments in justice and home affairs, including the death toll from a boat which capsized last Thursday off the coast of Lampedusa and the Syrian refugee crisis.

The Council recalled the EU's commitment to step up aid to the affected populations in Syria and neighbouring countries, given the ongoing deterioration of the conflict.

According to EU sources, the number of Syrian refugees in neighbouring countries  -Lebanon, Jordan, Turkey, Iraq, Egypt and the North African states – is currently 2.1 million and is expected to reach 3.4 million by the end of the year.

Droves of Syrian refugees have attempted to reach EU territory, with Bulgaria experiencing an unprecedented wave of arrivals through its land border with Turkey.

Ministers were presented with a report on the results of a fact-finding mission carried out by the Commission, Easo and Frontex in Bulgaria, Cyprus and Greece, with the objective of monitoring the potential migratory pressures coming, in particular, from Syria.

Opinions remain divided over whether all EU member states were pulling their weight in accepting claims for asylum.

Home Affairs Commissioner Cecilia Malmström said her team was asking all member states to do their utmost to resettle and to share responsibility because. “Today there are six or seven countries who take all the responsibility and we are 28 in this union,” she said.

Humanitarian Aid Commissioner Kristalina Georgieva, a Bulgarian national, told EURACTIV recently that she was afraid that Bulgarian society could turn hostile to immigrants from Syria.

Last weekend Georgieva visited her home country for a third time since the refugee wave from Syria began. She said that Bulgarians had to face the reality that Syrian refugees were likely to stay for years to come.

From the beginning of the year, 6,400 immigrants have crossed the Bulgarian border illegally, most of them from Syria. While the number may be significantly smaller compared to those who reach Italy, Spain or Greece, dealing with the influx is putting pressure on the country's limited resources for responding to mass immigration.

Bulgarian interior minister Tsvetlin Yovchev was quoted as saying in Luxembourg that his country would soon get direct financial assistance from the EU to cope with the influx of Syrian refugees.

Bulgaria is counting on “European solidarity” and expressed the desire to relocate many of the Syrians on its territory to other EU countries. However, it is unlikely that EU countries would agree to such a move, which must be done on a voluntary basis.

Malta, the a small island nation of 450,000 inhabitants, received 2,060 asylum claims from immigrants last year. Luxembourg, whose population is similar to Malta’s, received just four. But for the entire period 2010-2013, only 300 migrants from Malta have been resettled in other EU countries.

Ministers also discussed the challenge of migrants from Africa, who risk their lives to reach European shores and often drown at sea.

The recent tragedy at Lampedusa, a shipwreck which killed hundreds of African immigrants, was also discussed by ministers.

At the time of publication, 232 mostly Eritrean and Somali migrants perished in the seas off the small island, making it the one of the worst tragedies in the history of the EU's long immigration crisis. There were 155 survivors. Many more are so far unaccounted for from the ship estimated to have been carrying over 500 people.

Dailis Barakauskas, home affairs minister of Lithuania, the country currently holding the rotating presidency of the EU, expressed deep sorrow on behalf of his colleagues and condolences to the families of the victims.

He also called for solidarity with the Italian institutions. “This is one of those heavy moments when difficult questions have to be solved by entire Europe. We must make sure to achieve long-term solutions to stop such tragedies from repeating themselves,” Barakauskas said.

The council “discussed a package of possible measures that strive for sustainable solutions to avoid the repetition of such tragedies,” a statement said.

“Ministers took note of the information provided by the Italian delegation and the European Commission and expressed their determination to use all possible measures at EU level to prevent such tragedies in the future,” the statement said.

It was proposed to set up a joint task force that would prepare an action plan that would include “all practical measures and tools” in the possession of the EU.

Ministers stressed the need to enhance the co-operation and dialogue with neighbours and countries of origin and transit of immigrants and to strengthen the management of external borders, especially by more effective use of the Frontex agency.

Home Affairs Commissioner Cecilia Malmström said: “Member States have to do more to help refugees and asylum seekers. These people are the most vulnerable and they have already gone through horrible events.

"It is unacceptable that they have to risk their lives in order to receive protection. Member States have to be more active in resettling refugees to the EU, in order to prevent these deadly crossings.

"I have made it clear to all Ministers that these are European issues that require European answers. If they want to provide answers and show concrete solidarity they have to give the Commission the appropriate financial resources. I am confident that today all Member States have heard our strong call and will react accordingly."

Caritas Europa urged EU member countries to guarantee that the rights of asylum seekers and migrants are secured during operations at sea, either under the flag of an EU member state or Frontex.

“The EU cannot claim to be the champion of human rights if the Member States don’t get their act together and save lives, by putting human dignity first,” says Erny Gillen, President of Caritas Europa.

Caritas Europa reminds the EU Council that one way to achieve such a goal is to put in place resettlement and humanitarian corridors for people stranded in North Africa. Caritas Italiana, member of Caritas Europa, is active in Lampedusa assisting the migrants and the local population.