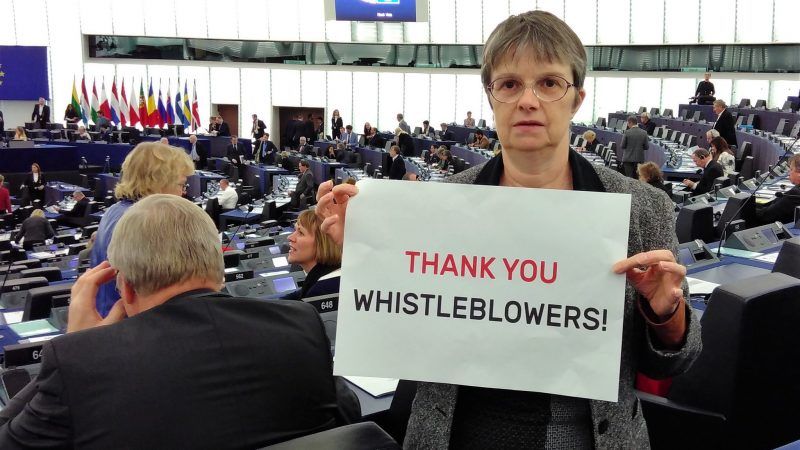 Whistleblowers exposing fraud, tax evasion, data breaches and other misdeeds will be given more protection from retaliation under new rules proposed by the European Commission on Monday (23 April).

The move by the EU executive comes in the wake of criticism from transparency campaigners about the lack of protection granted to individuals who report such breaches in EU laws.

They cite the example of two former accounting firm employees who were prosecuted in 2016 for leaking data about Luxembourg’s tax deals with large corporations. The conviction of one was overturned by Luxembourg’s highest court earlier this year.

Recent scandals such as Dieselgate, the Panama Papers or the ongoing Cambridge Analytica revelations show that whistleblowers can play an important role in uncovering unlawful activities that damage the public interest.

Behind each & every major scandal, from #LuxLeaks, to #PanamaPapers & #CambridgeAnalytica, change in our time is driven by #whistleblowers.

Critics also point to British regulators’ relatively lenient treatment of Barclays’ chief Executive Jes Staley last week who was allowed to keep his job after trying to uncover an informant at the bank.

The European Commission said its proposal was a game changer since it will require companies to set up internal channels for whistleblowers and also shield them from reprisals such as sackings, demotion and even litigation.

All companies with more than 50 employees or an annual turnover of over €10 million will have to set up an internal procedure to handle whistleblowers’ reports. All state, regional administrations and municipalities with over 10,000 inhabitants will also be covered by the new law.

There are also safeguards against malicious or abusive reports.

“There should be no punishment for doing the right thing,” Commission Vice President Francs Timmermans said.

Whistleblowers are a crucial source for investigative journalism. Our proposals make sure that #whistleblowers are protected when they go public with their information. https://t.co/MGY5MU3zj5 @VeraJourova pic.twitter.com/guGdV9xVO8

“In addition, today’s proposals also protect those who act as sources for investigative journalists, helping to ensure that freedom of expression and freedom of the media are defended in Europe.”

Věra Jourová, Commissioner for Justice, Consumers and Gender Equality added: “The new whistleblowers’ protection rules will be a game changer. In the globalised world where the temptation to maximise profit sometimes at the expense of the law is real we need to support people who are ready to take the risk to uncover serious violations of EU law. We owe it to the honest people of Europe”.

#CambridgeAnalytica would be just another
political consulting firm if a #whistleblower had not unveiled how they misuse
our personal data. Clearly these people play a major part in shedding the light
into how things work in practice. https://t.co/tG1aI6pS9O pic.twitter.com/kK3I2Ojx8k

Transparency International said the proposal was a bold step in recognising the importance and rights of informants.

“Companies have to see speak-up as something that would help them manage risks and avoid more serious issues such as violation of law, inappropriate conduct, crime or any type of harms,” ACCA head of corporate governance Jo Iwasaki said.

Most political groups and individual MEPs praised the Commission proposal, which requires approval from EU countries and the European Parliament before it can become law. Currently only 10 EU countries offer full protection to whistleblowers.

Reporters Without Borders stated that the Commission’s proposal fell short of satisfying the requirements of press freedom. One crucial element that is missing, it said, is the protection of whistleblowers when they alert the press.

“Including alerts to the media only as a last resort, in case of imminent danger or irreversible damage amounts to limiting press freedom and the right of the public to access information of general interest”, the international NGO said. It adds that disclosure from a whistleblower to a journalist, who will be able to verify and cross-check the facts alleged by the whistleblower, should even be seen as an act of good faith.

“Direct disclosure to the media should not only be widely permitted but also promoted in cases of serious violations of human rights, humanitarian law or fundamental freedoms and in cases where the interest of the public to be informed hinges entirely on the urgency of the situation”, said Julie Majerczak, the Reporters Without Borders Representative to the EU.

Moreover, the proposal seems to allow an alert only about unlawful activities or abuse of law. “The directive should allow for an alert about wrongdoings and any act that may harm or threaten the general interest, even if it is not strictly illegal”, said Paul Coppin, Head of the legal desk.

Journalist Jean Quatremer, a recent scourge of the European Commission following his efforts to expose the irregularities in the appointment of Commission Secretary General Martin Selmayr, called the proposal of the EU executive “ambitious”.

The parody account of Martin Selmayr replied that the Commission proposal contains an exception for Quatremer.

We fought for it. Now we've delivered.

Great news! After years of public pressure, the @EU_Commission has just published a groundbreaking proposal on protection of #whistleblowers: https://t.co/bvGC2seNSt [Thread] pic.twitter.com/ce6XKpiK3R

Success!!
After years of us campaigning with NGOs, trade unions and journalists, @EU_Commission has just announced their proposal for a directive to protect #whistleblowers!

Whistleblowers protect us all, all of them need protection! pic.twitter.com/3wXjpFjCki

#PanamaPapers & #Dieselgate are just some of the major scandals that have been revealed by #whistleblowers, who have acted in the interest of citizens. We need European rules to protect whistle-blowers. They defend our freedom, we should defend theirs. https://t.co/C48oVCOYjr

Victory! Today our campign for protection of #whistleblowers has paid off. Whistleblowers unearth major breaches of public trust &driving legislative change. They deserve our support, not criminalisation. Check out our detailed opinion of EC proposal: https://t.co/on90qr8NnK pic.twitter.com/jR2jJGKbpb

New proposed #Whistleblower Directive a victory for Greens (and for protecting us all) and a demonstration of how MEPs/Euro Parl are able to influence EU’s legislative agenda. https://t.co/kUTS6QbM0N pic.twitter.com/EZD1nJk9kw