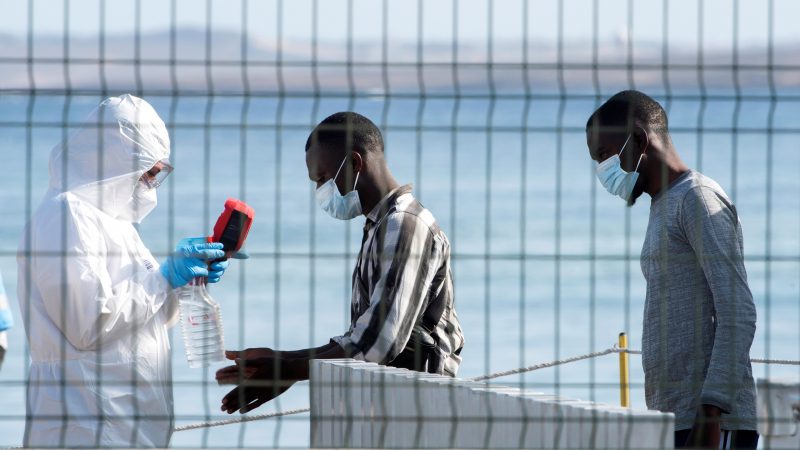 A medic checks some of the 46 migrants rescued at sea by Spanish Sea Rescue authorities at the port of Puerto del Rosario, Fuerteventura, Canary Islands, Spain, 4 September 2021. [EPA-EFE/Carlos De Saa]

Shortcomings in the EU effort to return unsuccessful asylum seekers are “encouraging illegal migration” instead of stemming it, the bloc’s watchdog institution warned in a report Monday (13 September).

The European Court of Auditors (ECA), which scrutinises EU policies and finances, found that efforts by Brussels to secure cooperation from countries outside the bloc to take back migrants had “yielded limited results”.

The ECA’s audit of the EU returns policy over the 2015 to mid-2020 period — focused on the 10 countries with the biggest numbers of non-returned irregular migrants — said the steps being taken to boost cooperation were “relevant”.

🤝Cooperation between the #EU & non-EU countries has not been efficient in ensuring that migrants illegally present on 🇪🇺 territory return to their own countries.

During 2015-2020, EU only achieved limited progress in concluding readmission agreements.

But they fall short in a number of areas, such as insufficient data-sharing between EU member states.

EU agencies cannot even agree on how many irregular migrants are ordered to leave, the report said.

The EU statistics office Eurostat, on which the ECA relies, says that some 500,000 migrants a year are ordered to leave the EU.

But Frontex, the EU border guard service that also helps with returns operations, uses a different methodology to arrive at a lower figure.

Leo Brincat, the lead author of the ECA report, told journalists that the accumulation of such shortfalls hampered the goal of swiftly returning irregular migrants.

“Rather than discouraging, they end up actually encouraging illegal migration,” he said.

Euronews/AP report : Instead of putting people off from making the journey to Europe, they are actually encouraged to do so, according to the European Court of Auditors (ECA). https://t.co/wtuNHXz7vj

“It is well known among the migrants that the returns are not effective, so this can actually encourage them to come even more,” he said.

Irregular migration is one of the most pressing issues for the European Union, a political hot potato since the 2015 inflow of asylum seekers largely fuelled by the war in Syria.

But an attempt to overhaul migration and asylum rules across the bloc has reached an impasse.

Eastern member states in particular have rejected its core principle of sharing out the hosting of asylum seekers so frontline countries such as Greece and Italy are not the only ones feeling the impact.

The issue is complicated by the fact that, while Brussels is meant to come up with overarching rules and legislation in this area, member states retain responsibility over return decisions and how they are carried out.

Since the early 2000s, the EU has reached readmission agreements with 18 countries outside the bloc, including Turkey, Albania, Serbia and Pakistan.

It has opened talks with six others, including China, Nigeria, Morocco and Algeria.

Several EU countries have their own, bilateral treaties with some countries.

But the ECA report found that countries are baulking at EU insistence on a clause demanding they take back migrants who travelled through their territory, as well as their own nationals.

It said that non-binding arrangements — such as those negotiated between 2016 and 2018 with the likes of Afghanistan, Bangladesh, Guinea and Ethiopia — had proved more successful.

Incentives should be strengthened to coax countries to go along with such agreements with the EU, such as already happens by linking EU visas to compliance, it said.

And member states should boost cooperation between themselves to reduce the number of irregular migrants absconding before their ordered return to their country, and improving data on returns.