Koumoutsakos: "The new EU migration deal should have a robust mechanism of migrants’ returns as well as a system that will smash migrants’ smugglers." [Photo by Sarantis Michalopoulos]

The EU will not accept Turkey’s migration pressure at its external borders and will use all necessary measures, in accordance with international law, to stop illegal crossings, European ministers of internal affairs have said. However, the EU’s role in tackling the problem at its root in Syria remains unclear.

In light of an escalating crisis at the Greek-Turkish border, the ministers said the EU “strongly rejects Turkey’s use of migratory pressure for political purposes”.

“Illegal crossings will not be tolerated […] In this regard, the EU and its member states will take all necessary measures, in accordance with EU and international law,” the final statement read, adding that migrants should not be encouraged to endanger their lives by attempting illegal crossings by land or sea.

The situation at the Greek-Turkish border has been chaotic since last Friday (28 February), when Ankara decided to open its borders for thousands of migrants and refugees to reach EU territory.

Turkey is asking for further EU support for refugees from Syria and for its escalating fight with the Russia-backed Damascus regime.

On the other hand, Brussels is desperate to avoid a repeat of the 2015-16 crisis and has repeatedly called on Ankara to stick to the March 2016 EU-Turkey Statement aimed to prevent refugees and migrants from crossing to Greece.

In addition, the European Commission announced earlier this week additional aid of €700 million to help Greece deal with the migrant crisis. 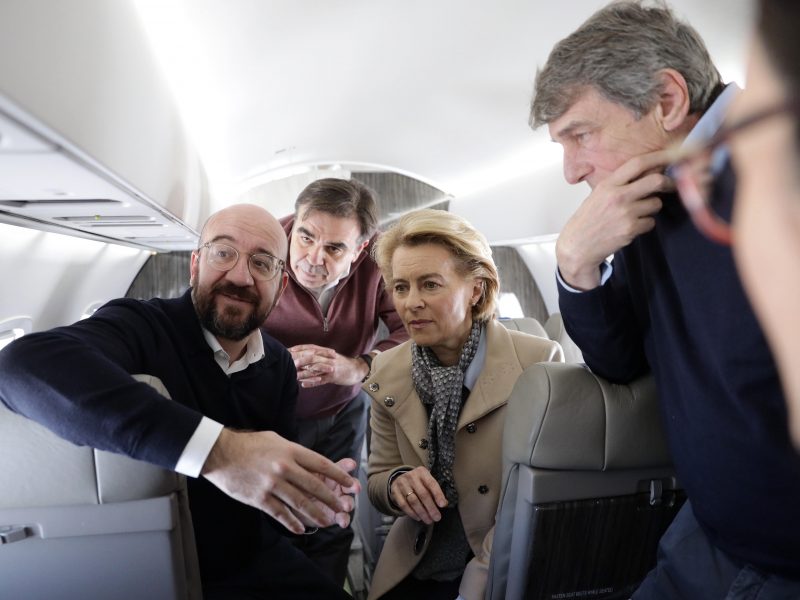 Referring to Turkish President Recep Tayyip Erdoğan’s accusation that Greece had killed migrants trying to cross its border, the ministers also urged Turkey to “counter the dissemination of false information”.

Before the meeting, Greek ministers held a press conference where they showed a two-minute video which, according to them, proves Turkey’s propaganda about the ongoing crisis.

The video showed migrants admitting that they were released from Turkish prisons and were then transported by bus at the border with Greece. It also showed what it said was tear gas provided to migrants by the Turkish police.

However, EURACTIV was informed that there was a disagreement regarding the final wording of the statement.

Germany raised its objection to the inclusion of the word “strongly” in the final text, in an attempt not to appear too aggressive against Ankara.

For Athens, the inclusion of the word “strongly” had a substantial diplomatic meaning.

The Greek public opinion was disappointed by the fact that the European Commission has refrained, since the beginning of the crisis, from explicitly admitting that Turkey has officially violated the EU-Turkey Statement on migration with its recent activities at the Greek-Turkish border.

A tense meeting in Ankara

Meanwhile, EU diplomacy chief Josep Borrell and Commissioner for Crisis Management Janez Lenarčič held a meeting with Turkish officials in Ankara on 3-4 March to discuss the situation in Syria as well the “catastrophic humanitarian situation” in Idlib.

“In all our meetings I had the opportunity to express our understanding for the difficult situation Turkey is currently facing. But also, I stressed that the current developments at the European borders are not leading to any solution,” Borrell said in a statement.

Referring to the situation in Idlib, the EU top diplomat said Turkey and the EU have a common interest to end the conflict in Syria.

According to sources, Borrell’s call for a political dialogue with Turkey was not “entirely rejected”.

However, EURACTIV was informed that during the meetings, the Turkish side was “extremely hardline” or even “aggressive”, with all Ankara officials taking the more or the less same line, directed by Erdogan.

A source said Turkey’s tactics to put the blame on the EU is just a “pretext” to get more money and prove Ankara’s prestige of being the main player in the region.

The same source added that discussions about the protection of Europe’s external border won’t last too long as the main question is whether EU member states are ready to come up with a “sustainable” and permanent migration policy.

Giorgos Koumoutsakos, the Greek alternate minister of migration, said yesterday that the much-awaited new EU migration deal should not only provide shared responsibility and effective solidarity but also be enriched with a robust mechanism of migrants’ returns, as well as a system that will “smash” migrant smugglers.

The question of resettlement

But the big question is whether EU member states are ready to support Turkey’s lasting request to resettle Syrian refugees to the territory it has seized along a 20-mile stretch of its border with northern Syria.

The magazine Foreign Policy reported last December that Turkey’s plan has heightened concerns that Ankara may be preparing to pressure Syrian refugees to return to an area that remains unsafe and that it might intend to alter the demographics of the region, preventing the region’s Kurdish population to return to their traditional lands following Erdogan’s invasion in October.

“When it comes to the return of the Syrian refugees, for us the key is the involvement of and coordination by the UNHCR and its assessment whether the returns can be safe, voluntary and dignified. Such conditions are not in place and that is why the EU cannot participate in any returns of the refugees,” Stano said.

He added that the only plan regarding refugees returns Turkey has raised with the EU is the so-called safe zones, which are not acceptable in the way Turkey has suggested because “they would amount to attempts to change the demographics in these areas and profoundly destabilise an already fragile area”.

Earlier this week, Erdogan told a news conference that Europe had offered Ankara a billion euros, which he dismissed saying “we don’t want this money”.

However, according to EU sources, no such offer has been made.