EU to back unprecedented naval force to fight migrant smugglers

By Alix Rijckaert | EURACTIV.com with AFP 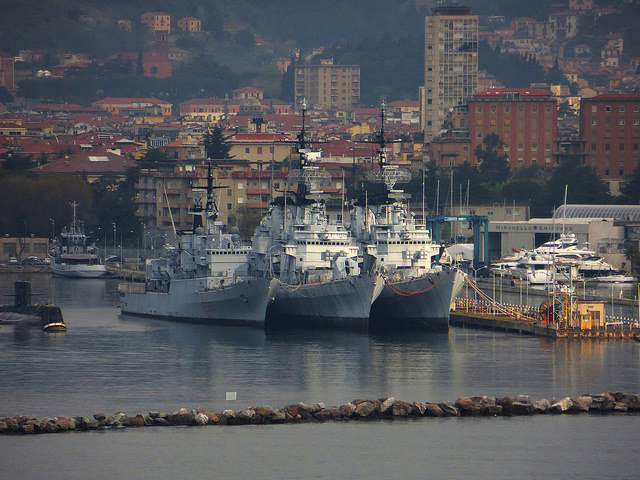 The European Union is set to back plans on Monday for an ambitious naval force to fight people smugglers in the Mediterranean after a series of shipwrecks that killed hundreds of migrants.

The unprecedented mission, starting in June, will involve the deployment of warships and surveillance aircraft off the coast of Libya, the main launching point for people risking their lives to reach Europe.

Foreign and defence ministers are set to approve the scheme — a rare joint military step for a 28-nation bloc that historically prefers political and financial action to armed cooperation — at a meeting in Brussels.

But the plan still risks being largely toothless unless the EU wins a United Nations resolution approving military action against smugglers before their boats reach European waters.

The EU wants to be able identify, intercept and possibly destroy the smugglers’ vessels while their boats are in Libyan waters in order to disrupt the traffickers’ “business model”.

But there no question of any EU “boots on the ground” in Libya, which has become a main launching point for people traffickers since being plunged into chaos with two rival governments and a significant number of Islamic State militants, EU foreign policy chief Federica Mogherini said last week.

More than 5,000 migrants, many escaping civil war in Syria, have died over the past 18 months while trying to cross from North Africa, often on flimsy rubber dinghies or crowded fishing boats.

After Monday’s decision the ministers are expected to ask the European military authorities to set up the mission, sources said. It should then be
formally launched at an EU summit in June.

Leading countries in the EU — Britain, France, Germany, Italy and Spain — have already promised to deploy warships for the mission to tackle the smugglers in the Mediterranean.

The headquarters of the mission, called EU Navfor Med, is to be in Rome and will be led by Italian Rear Admiral Enrico Credendino, a European diplomat told AFP.

Pressure has grown on governments to act after an overcrowded migrant boat sank in the Mediterranean last month, leaving more than 750 dead in a case that sparked international outrage.

But parts of the plan — particularly quotas for distributing asylum seeker arrivals around the EU — are causing deep divisions.

Britain says it will not take part in the quota system and has called for economic migrants to be pushed back to where they came from.

It received unexpected support from French Prime Minister Manuel Valls, who rejected the quota plan at the weekend, while Hungary, Poland, the Czech Republic, Estonia, Latvia, Lithuania and Slovakia have also spoken out against them.

The EU naval force would have to deal with traffickers who are often heavily armed and have often charged their victims thousands of dollars for the risky passage.

Brussels wants to take the operation step-by-step, starting by collecting intelligence on the traffickers by using radar, satellite pictures and reconnaissance flights and raiding unflagged boats.

If the EU wants ships from its members states to enter Libyan waters or capture a boat flying a foreign flag, it needs the green light from the UN under international law.

German Foreign Minister Frank-Walter Steinmeier said last week at a meeting of NATO foreign ministers in Turkey that he expected UN approval to be forthcoming, with Russia overcoming initial scepticism.