Dockers walk in front of the the brand new 420-meter container carrier 'China Cosco Taurus' at the port of Piraeus, near Athens, Greece, 26 February 2018. [Yannis Kolesidis/EPA/EFE]

The large-scale fraud, which involves underdeclaring the value of imported goods to pay lower duties and sales taxes, was first uncovered in Britain, where it had gone on for years, prompting the European Commission this year to demand that London pay €2.7 billion in lost customs duties to the EU budget. 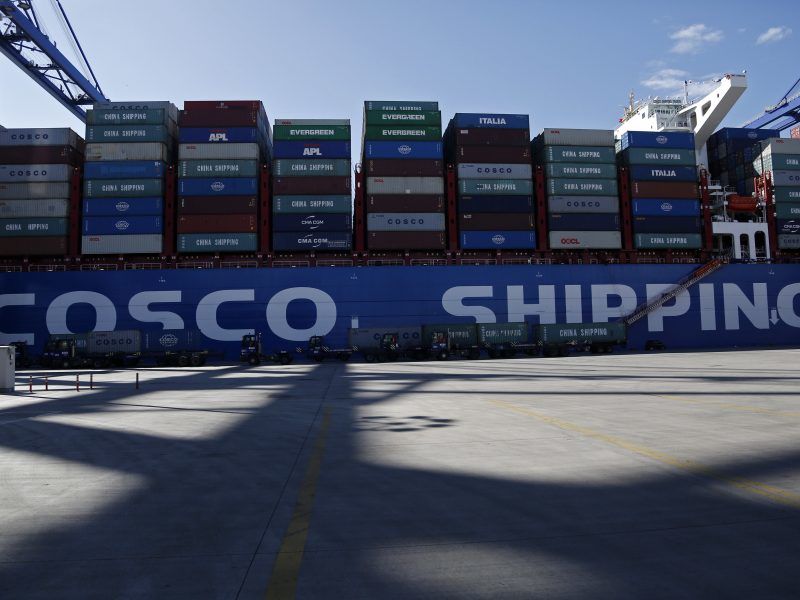 Officials at the EU anti-fraud agency OLAF said they now suspected the scam could have shifted to Hungary and to the port of Piraeus in Athens, which has been majority-owned by China’s state-owned COSCO Shipping since 2016.

Hungarian and Greek customs data show a surge of undervalued clothing and footwear imports from China over the past two years, OLAF officials told Reuters. They stressed that this trend had coincided with a drop in undervalued Chinese imports into Britain.

Customs duties in EU countries are a direct revenue for the bloc’s budget. They are collected by national authorities before being sent to Brussels.

“We are worried about this,” OLAF’s director for investigations Ernesto Bianchi told a news conference in Brussels on Wednesday, adding that monitoring of import flows would be enhanced.

Asked about the suspected fraud in April, COSCO Shipping said: “The company has in its global operations consistently and strictly followed local and international laws, and persevered to operate legally and compliantly.”

Hungarian and Greek customs authorities were not immediately available for comment.

China wants to transform the Greek port into its “gateway to Europe” as part of its $126 billion “Belt and Road” initiative, which envisions a new Silk Road of land and sea routes with trading partners.

Under the plan, a fast rail and land route would connect Athens to the Hungarian capital, Budapest, across the Balkans. That same route could have been used by traffickers to move underpriced and undeclared Chinese goods to Hungary, investigators suspect.

“It is maybe too soon to jump to conclusions, but it is worrying that fraudsters are now obviously looking at infrastructure investment as a business opportunity for them too,” Bianchi said, urging EU authorities to make sure that the infrastructure built by the Chinese “is not exploited for illicit traffic”.

In the British scheme, Chinese criminal organizations used the German port of Hamburg as Europe’s first arrival point for undervalued clothing and footwear cargos. But goods passed customs controls only after having been shipped to Britain’s ports, under EU rules that spare checks on items in transit between the bloc’s member states.

The British ports of Dover and Felixstowe were still the EU’s main hubs for undervalued Chinese imports in 2017, OLAF data showed, but that flow has nearly stopped this year because of stricter checks by British customs, EU officials said.

Britain’s decision to leave the EU’s customs union might have also persuaded the criminal groups that oversee this business to find new routes to bring Chinese goods into Europe, the officials said.

The British government is contesting that frauds occurred in UK ports. OLAF chief Nick Ilett said he expected the controversy with Britain would last “some time” and would probably need to be settled at the EU’s court of justice.

OLAF defines undervalued goods as those which fall far below the average price declared in all EU customs.