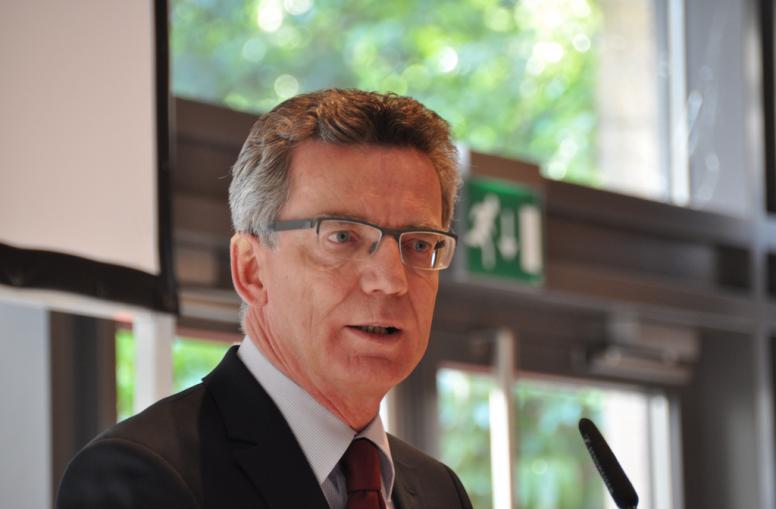 The establishment of the caliphate by “Islamic State” (IS) and its military successes have created a “spirit of euphoria” among jihadists in Europe, says the Annual Report on the Protection of the Constitution in Germany, which was presented on Tuesday (30 June). euractiv.de reports.

If IS is able to establish itself in a larger area in the long-term, the “transnational jihad” will have much more at its disposal than the refuge and training territory it once had in Afghanistan, according to the German Office for the Protection of the Constitution.

This centre of logistics would then be able to coordinate complex attacks, the office said, pointing to a growing danger for European citizens.

At 300 persons, German Minister of Internal Affairs Thomas de Maizière said in Berlin, the number of so-called dangerous persons is higher than ever. The threat level should be taken seriously, he warned.

The deadly attack on foreign tourists in Tunisia was also aimed att German interests, he said. “There could also be attacks in Germany,” the Minister pointed out.

German authorities are especially concerned about the growing number of individuals who have already moved from Germany to Syria or Iraq to become fighters. There is a risk that they will return coarsened and with combat experience, the report states.

Such recruitment is supported by the salafist scene in Germany, which counts 7,500 members by now, said the president of the Office for the Protection of the Constitution, Hans-Georg Maaßen.

As the attacks on Paris, Copenhagen, Toulouse and Lyon show, individuals who have not left the country, but are influenced by Islamist-jihadist propaganda. also pose a threat.

Meanwhile, the rise of IS and the jihadist movement coincides with a parallel rise in right-wing extremism, the office warned.

Attacks on refugee camps motivated by right-wing extremism also increased from 55 recorded in 2013 to 170 last year. This year, the number could be even higher. In the first half of 2015, there were already 150 crimes of this kind, according to de Maizière. There should be “no silent understanding and especially no silent consent” for this, he said.

On the other hand, the number of violent acts from the extreme left stagnated at last year’s level of 995 attacks. But the intensity and acceptance for crimes in this scene has increased, de Maizière warned.

This could be observed, the Internal Affairs Minister indicated, during the riots at the official opening of the new ECB headquarters, for example.

Maaßen emphasised that both the right-wing and left-wing extremist scenes strive to snatch up issues and concerns in the population to develop a connection.

The Interior Minister said the hacker attack on the Bundestag’s IT network, which has been going on for weeks, underlines the growing interest foreign intelligence services have in information from Germany.

“Digital vulnerability” has grown here, he pointed out, explaining that counterintelligence measures have been reinforced. With the new “360 degree view”, the Minister said, all directions are investigated. This includes keeping an eye on the activities of intelligence services in friendly states, he added.

In the report, the Office for the Protection of the Constitution is convinced that Russia is likely to intensify its spying activities in light of the ongoing Ukraine crisis. Russian intelligence services are also attempting to broadcast their view of things into the public sphere and exert influence, the report indicates.

Last year, the domestic security agency also recorded a growing number of attempts in Iran to procure illegal materials which could be used in the development of nuclear weapons.

Meanwhile the spying accusations against the United States’ National Security Agency (NSA) were not addressed in the report. So far, Maaßen assured, there has been no indication that the NSA violated German law and analysed data from German citizens.