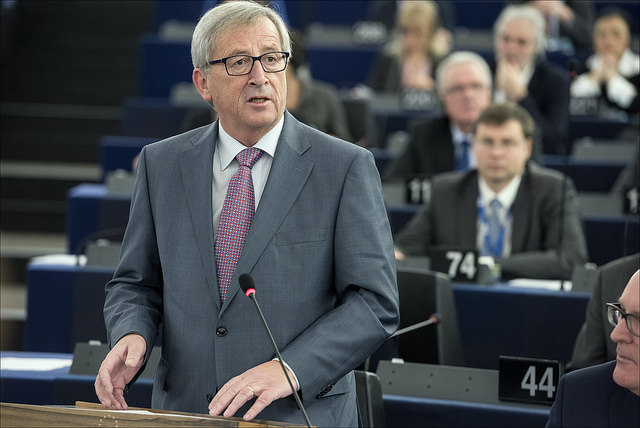 Speaking in the European Parliament in Strasbourg, Juncker warned that allowing the Schengen system to erode would have political consequences for other European Union projects, including the euro.

“If the spirit of Schengen leaves us…we’ll lose more than the Schengen agreement. A single currency doesn’t make sense if Schengen fails,” he said. “You must know that Schengen is not a neutral concept. It’s not banal. It’s one of the main pillars of the construction of Europe.”

Schengen currently has 26 members, some of which are non-EU countries. It allows freedom of movement across the region and plays a key role in underpinning the EU’s single market of goods, services and labour.

Europe’s free travel area has come under immense pressure since the terrorist attacks in Paris and the refugee crisis, which has led thousands of refugees fleeing war and poverty in the Middle East and Africa to stream across the continent’s southern frontiers in search of security in Europe.

With Greece in particular struggling to contain the human tide, countries from Hungary in the south to Denmark in the north have put up temporary border controls to stem the flows, making passport-free travel harder than at any time in decades.

“The Schengen system is partially comatose,” Juncker added. “Those who believe in Europe and its values, in its principles and freedoms must try – and try they will – to reanimate the Schengen spirit.”

Juncker’s statement was primarily political in its significance, since the Schengen zone, which has 22 EU members is legally distinct from the 19-member euro zone.

However, his warning reflected growing concern at EU headquarters in Brussels that intra-EU tensions over the migrant crisis could shake up a broader foundering of the post-World War Two war drive for European unity.

Earlier, German Chancellor Angela Merkel drew parallels between the difficulties faced by the Schengen and euro systems, saying quotas for distributing refugees around the EU were needed as part of “political solutions” to preserve Schengen.

“A distribution of refugees according to economic strength and other conditions … and the readiness for a permanent distribution mechanism … will determine whether the Schengen area will hold in the long term,” she said.

During the debate in Parliament, French MEP Marine Le Pen called for national borders to be re-established inside Europe. She said that terrorists were entering the European Union alongside migrants. “It is a reality, and you cannot simply brush it to one side. You can’t have uncontrolled migration flows into the EU.”

Juncker said European politicians must refrain from mixing up asylum seekers and terrorists and called for better coordination between intelligence agencies. He also urged MEPs to toughen the proposed Passenger Name Record (PNR) directive so that it includes passengers taking flights within the EU, a measure asked by EU justice and home affairs ministers.

German MEP Elmar Blok said that this was “not a fight against Islam” noting that refugees cannot be tarred with the same brush as terrorists. He also denounced criticisms of Schengen.

“It’s not a question of blaming Schengen – we have to force our intelligence agencies and secret service agencies to cooperate,” noting that only five member states fulfil their contractual obligation to provide Europol with all requested information.

Green MEP Jan-Phillip Albrecht said that the Passenger Name Record  (PNR) directive currently being adopted by the European Union was not the answer to the terrorist threat, describing it as “an extraordinary expensive model of 28 silos full of completely irrelevant information on innocent travellers. We already know who is on which plane in Europe... we need targeted and joint information sharing.”

0 responses to “Euro at risk if Schengen collapses, says Juncker”