Demonstrators gather to protest against the amendment of the higher education law seen by many as an action aiming at the closure of the Central European University, founded by Hungarian born American billionaire businessman George Soros, in Budapest, Hungary, 9 April 2017. [Zoltan Balogh/EPA]

The Commission opened an infringement procedure against Hungary on Thursday (13 July) for its new law on foreign-funded NGOs, and went a step further in another infringement it had launched in April over the Higher Education Law, that seeks to close the Central European University (CEU), founded by George Soros.

The procedure concerns a new Hungarian law according to which non-government organisations (NGOs) receiving more than €24,000 ($26,000) a year from abroad to register as a “foreign-supported organisation” or risk closure. The move was seen as targeting US-Hungarian billionaire Soros.

The new law, adopted on 13 June, came amid a general crackdown on dissent. Prime Minister Viktor Orbán, who has locked horns with Western partners over several issues including the freedom of education, the press and the courts, said the NGOs served foreign interests. Orbán faces elections in 2018. 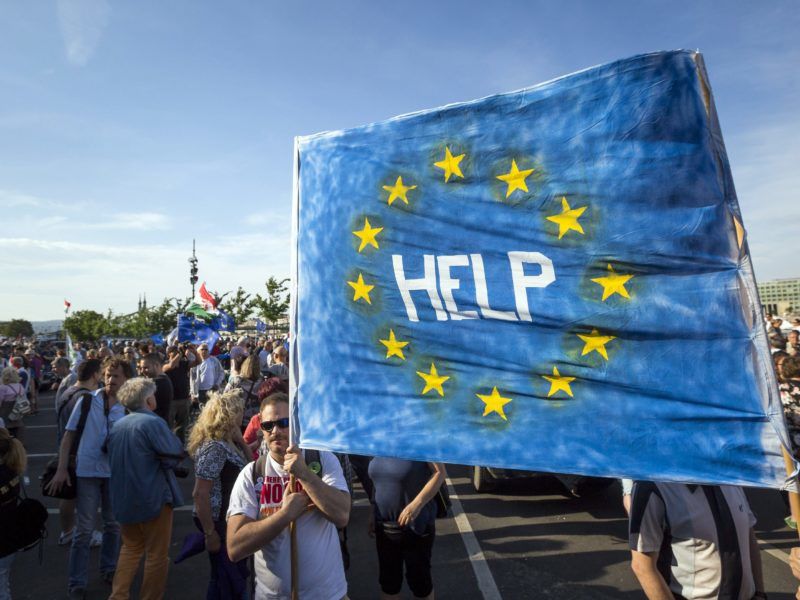 According to a press release, the European Commission concluded that this law does not comply with EU law for the following reasons:

The Commission has therefore concluded that Hungary is failing to fulfil its obligations under the EU Treaties and the Charter of Fundamental Rights of the European Union.

Regarding the law targeting the CEU, the Commission decided to send Hungary a reasoned opinion – the second step in an infringement procedure – on the grounds that the law as amended is not compatible with the freedom for higher education institutions to provide services and establish themselves anywhere in the EU.

The CEU has stood as a bulwark of liberal thinking in Hungary and across Eastern Europe since it was first opened in 1991 after Soviet-backed communism collapsed in the region.

According to a press release, the Commission states that the new law runs counter to the right of academic freedom, the right to education and the freedom to conduct a business as provided by the Charter of Fundamental Rights of the European Union and the Union’s legal obligations under international trade law.

Orbán, who came to the European Parliament last April to discuss contentious issues with MEPs only hours after the Commission launched the infringement procedure, says he has no issues with the EU, but blamed Soros, whom he called “the American financial speculator attacking Hungary”.

Hungarian NGOs welcomed the infringement procedures, but said this was not enough. They called on the European Parliament to proceed as expeditiously as possible to draw up a report with a view to triggering Article 7(1).

Hungarian NGOs & Liberties statement on infringements against Hungary's NGO law: thanks but it's not enough: https://t.co/HEsqxKnyl0

Article 7 of the Lisbon Treaty, is sometimes refered to as “the nuclear bomb”, has not been used until now. It is designed to defend the EU’s core values such as democracy, freedom, human rights and the rule of law. If the EU notices a “serious and persistent breach” of these values it can activate Article 7 and suspend membership rights, such as voting in the EU Council, or access to the single market.

We welcome the decision of the European Commission to launch an infringement procedure about #Hungary #LexNGO https://t.co/clXkPRiD8c pic.twitter.com/QtiQQouEYj

4 responses to “European Commission steps up infringement procedures against Hungary”