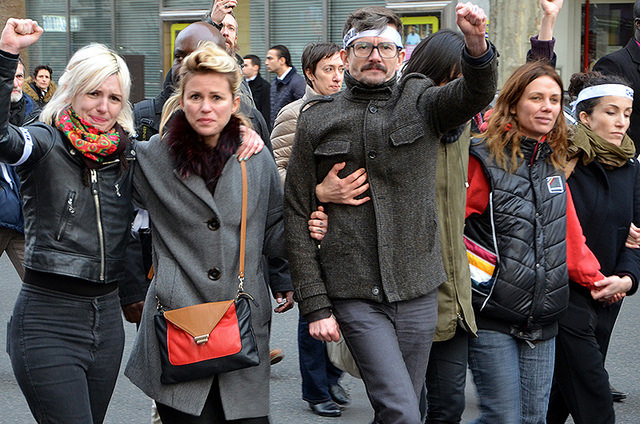 Politicians temporarily put aside their divisions to display a sense of historical unity during the Paris March against terrorism.

David Cameron, the British Prime Minister who strongly opposes France’s views on European affairs, was the first to confirm his participation in the march.

Even more surprising, the leaders of Israel and the Palestinian authority, Binyamin Netanyahu and Mahmoud Abbas, attended the same lunch, and even marched together in the streets of Paris.

Priority to the fight against “foreign fighters”

The European and global response to the Paris shootings had begun in the morning with a meeting of Home Affairs Ministers.

US Secretary of State Eric Holder assured the EU of America’s support in the fight against “foreign fighters” and what he described as “lone wolf” terrorists. Washington will host a conference on anti-extremism on 18 February, Holder announced.

Two priority tracks will be explored: blocking the ability of foreign fighters to travel, and countering terrorist propaganda on the Internet. The use of Europol, Eurojust and Interpol should also intensify, as well as the exchange of relevant information between European police forces.

The proposal, initially tabled in 2011, is currently blocked in the European Parliament, where elected representatives are concerned about the protection of individual freedoms and privacy.

“We want a constructive approach with representatives of the European Parliament, and I will soon receive the French MEP in charge of the file,” said Bernard Cazeneuve.

At the end of the meeting, Eric Holder, the US Attorney General, announced an international meeting on terrorism on 18 January in Washington.

New security measures will be discussed by foreign ministers at a meeting on 19 January, and by interior ministers on 29 January. A summit of EU leaders, scheduled for 12 February, will also discuss the EU’s anti-terrorism response.

Close to 4 million people in the streets

At noon around the Place de la République, a dense crowd rapidly filled the streets and squares where the march was scheduled to start.

Most participants were not trained protesters. “I never demonstrate, but today I feel hurt, their bullets have damaged my country,” explained a pensioner walking painfully with a cane.

Some had to wait until after 4PM, as the VIP march in front of them blocked the procession. Heads of governments and relatives of the victims walked in two separate groups for just 400 meters, before engaging in a discussion in the midst of the boulevard, delaying the progression of the march.

Meanwhile, a coloured and diverse crowd holding banners in support for Charlie Hebdo and freedom of expression fought the cold by applauding, chanting the Marseillaise and The Internationale. Banners in fact showed solidarity for all the victims – journalists, Jews and police officers – who died in the killings, and many displayed messages of tolerance for Muslims.

Between the Place de la République and the Bastille, a procession of police trucks was applauded by the crowd, a very rare phenomenon in Parisian demonstrations where security forces are often booed. Dozens of snipers who were positioned on the roofs on the sidelines of the event were also cheered by the crowd. They responded by waving.

The parade finally marched on several parallel routes in a kind of chaos, and the protesters didn’t disperse before nightfall.

Around 1.5 million people marched in other towns in France at the same time, bringing the total number of marchers close to 4 million, a number unmatched in France since the end of World War II, and the liberation of Paris.

An attack on the French satirical paper Charlie Hebdo left 12 people dead on Wednesday 7 January, including the artists Cabu and Wolinski.

European Union governments and officials are discussing responses to the killing of French journalists in Paris and could propose new policies in the coming weeks.