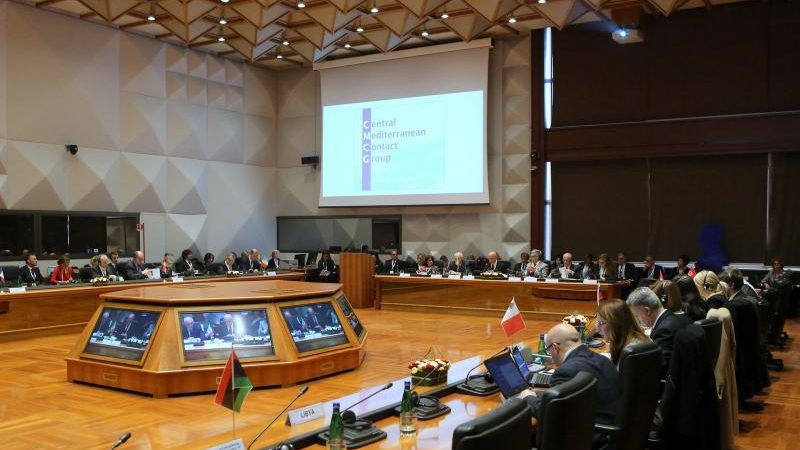 Rome meeting of interior ministers. [Ministry of Interior of Italy]

One year after a controversial deal with Turkey to stop migrants setting out across the Aegean Sea for Greece, the European Union is seeking to reach a similar accord with conflict-hit Libya, despite fierce opposition from human rights campaigners.

Just this past weekend more than 3,300 people were rescued from unseaworthy vessels off the north African country, bringing the number of arrivals in Italy to nearly 20,000 so far in 2017 – a significant increase on previous years.

The wave of attempted arrivals continued Monday, with the Italian coastguard saying it had coordinated the rescues of about 1,800 people off the Libyan coast.

Italy set up a fund to help African countries better seal their borders in a bid to keep migrants from boarding flimsy and often deadly rubber boats bound for Europe, its foreign minister said today (1 February).

The group released a declaration of intent which limited itself to promising increased coordination and information-sharing in a bid to tackle the root causes of migration, as well as combat smuggling and strengthen borders.

“The aim is to govern migratory movements” rather than be governed by them, said Italian Interior Minister Marco Minniti.

Libya’s UN-backed unity government has requested €800 million worth of equipment to help patrol its coast and territorial waters, including radars, boats, helicopters and all-terrain vehicles, boats and helicopters, according to Italy’s Corriere della Sera daily.

There is also talk of a Libya-based operational centre to coordinate rescues in international waters off the coast, relieving the burden on Rome, which has been forced to monitor and intervene well beyond its established maritime surveillance zone.

Experts say some of the equipment requested by Libya would fall foul of a UN embargo on arms imports into the country.

France’s Interior Minister Bruno Le Roux stressed the importance of making sure the Libyan coastguard lives up to its EU training.

Some 90 members of the coastguard are currently completing skills training under the EU, and Italy is preparing to return 10 coastguard boats to Libya that it seized in 2011.

They are expected to be operational by the end of April or in early May, Minniti said.

The idea is to intercept migrants before they reach international waters and take them to camps in Libya where their human rights would be protected — “a big step forward” from current conditions in the country’s migrant holding camps, Minniti said.

But critics warn against planned repatriations of asylum seekers to Libya, a country where allegations of torture, rape and murder are rife.

Those picked up off Libya and not entitled to international protection would be returned to their countries of origin, Minniti said, without saying what would happen to those who are eligible for asylum, subsidiary protection or humanitarian protection.