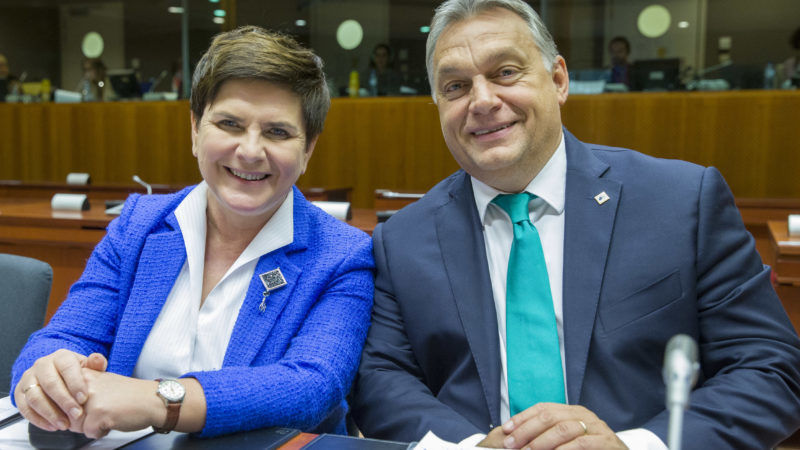 The vote at a plenary session in Strasbourg was preceded by a fierce debate, which was criticised by Polish President Andrzej Duda and Prime Minister Beata Szydło. Hungary,  which faces a similar threat of sanctions, said it would veto any attempt to punish Poland.

“Parliament decided by 438 votes to 152 to prepare a formal request that the Council activate the preventive mechanism provided for in  Article 7.1. If the risk persists and the Polish authorities refuse to comply with the EU recommendations, the procedure might lead to the suspension of Poland’s voting rights in the Council,” a Parliament statement said.

The majority of the MEPs for the Polish opposition Civic Platform abstained, but six supported the document, while the MEPs of the ruling Law and Justice (PiS) party were against, although seven representatives of the European Conservatives and Reformists faction supported the resolution.

With this, the Parliament started the formal process leading to the first stage of the infringement procedure of Article 7, which can result in sanctions against Poland.

Poland’s nationalist ruling PiS party has been increasingly at odds with Brussels since coming to power in late 2015, because of its drive to put courts and state media under government control. Another contentious issue is the logging in a primeval forest in eastern Poland, which the EU wants to see stopped.

PiS has steadily dismissed EU criticism as meddling in its internal affairs.

Duda: Where is the respect for democracy?

President Duda, an ally of PiS who unexpectedly vetoed two of the government’s judicial reforms in July and presented his own version of these draft laws, criticised the stance the opposition Polish MEPs took during the EP debate on Wednesday.

“The behaviour and language of the MPs and their faction colleagues is not acceptable. This is lie speech, which strikes Poland, the Polish people and our right to choose. Where is the respect for democracy?” the president, a former MEP himself, wrote on Twitter on Wednesday evening.

Prime Minister Beata Szydło called the Parliament debate a scandalous incident and said that “politicians maligning their home country on the international arena are not worthy representing it”.

“During the EU summit [in Gothenburg] on Friday I will address today’s scandalous incidents that happened in Parliament,” Szydło said.

The EU’s concerns about developments in Poland escalated after a nationalist rally in Warsaw at the weekend, where some participants, their faces covered, waved banners bearing anti-Semitic, racist and xenophobic slogans. The prime minister said such reports blew out of proportion a marginal incident.

“I want to protest strongly against the claims made today in the European Parliament and say it loud and clear: Poland is a country free of anti-Semitism and racism. Those, who say otherwise, simply fall short of the truth. No marginal incidents should be identified with the whole nation,” Szydło added.

Many members of the Parliament on Wednesday joined Jewish and human rights groups in expressing alarm at the attitudes seen during the rally.

“This was happening in Warsaw, in Poland, at less than 350 kilometers from Auschwitz and Birkenau,” said Guy Verhofstadt, head of the Parliament’s liberal group, referring to the Nazi death camp set up in occupied Poland where more than a million people, mostly Jews, were killed during World War Two.

Szydło said the March of Independence rally last weekend was marred by “provocateurs” infiltrated in “the group of mostly young patriots with flags”.

“As Prime Minister of the Polish Government, as a member of the Republic of Poland, but also as an ordinary citizen, I definitely distance myself from racist and anti-Semitic attitudes,” she added.

In an interview with Hungarian news agency MTI, he stressed that the Hungarian government stands at the side of Poland and rules out the adoption of the decision. Asked if this meant Hungary would make use of its right of veto, he replied: Yes.

The strong link between the two rogue eastern members was not lost on Verhofstadt, who told MEPs:

“Poland could still be a leader in Europe but has degraded itself to the gang of [Hungarian PM Viktor] Orbàn and its illiberal societies. Kaczyński has copied Orbàn by politicising the constitutional court, curtailing the civil society, muzzling the free media.”